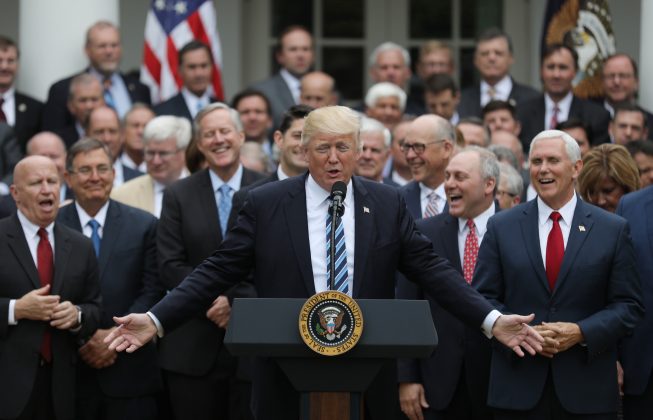 President Donald Trump (C) gathers with Vice President Mike Pence (R) and Congressional Republicans in the Rose Garden of the White House after the House of Representatives approved the American Healthcare Act, to repeal major parts of Obamacare and replace it with the Republican healthcare plan, May 4, 2017. REUTERS/Carlos Barria

WASHINGTON (Reuters) – A seven-year Republican effort to repeal and replace Obamacare faces a major test this week in the U.S. Senate, where lawmakers will decide whether to move forward and vote on a bill whose details and prospects are uncertain.

The Senate will decide as early as Tuesday whether to begin debating a healthcare bill. But it remained unclear over the weekend which version of the bill the senators would ultimately vote on.

President Donald Trump, after initially suggesting last week that he was fine with letting Obamacare collapse, has urged Republican senators to hash out a deal.

“Republicans have a last chance to do the right thing on Repeal &amp; Replace after years of talking &amp; campaigning on it,” Trump tweeted on Monday.

Republicans view former President Barack Obama’s signature 2010 health law, known as Obamacare, as a government intrusion in the healthcare market. They face pressure to make good on campaign promises to dismantle it.

But the party is divided between moderates, concerned that the Senate bill would eliminate insurance for millions of low-income Americans, and conservatives who want to see even deeper cuts to Obama’s Affordable Care Act.

The House in May passed its healthcare bill. Senate Republicans have considered two versions but have been unable to reach consensus after estimates showed they could lead to as many as 22 million fewer Americans being insured. A plan to repeal Obamacare without replacing it also ran aground.

If the Senate approves a motion to begin debating a healthcare bill, Majority Leader Mitch McConnell will determine which proposal has the most Republican support and move forward to a vote, Republicans said.

Republicans hold 52 of 100 Senate seats. McConnell can only afford to lose two Republican votes as Democrats are united in opposition.

Senator John Barrasso, a member of the Republican leadership, acknowledged on Sunday that there remained a lack of consensus among Republicans.

“Lots of members have different ideas on how it should be best amended to replace what is really a failing Obama healthcare plan,” Barrasso said on CBS’s “Face the Nation.”

The Republican effort has also been complicated by the absence of Senator John McCain, who has been diagnosed with brain cancer and is in his home state of Arizona weighing treatment options.