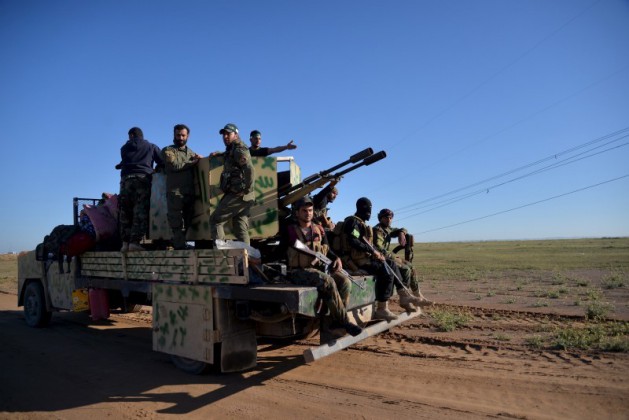 Members of the Hashid Shaabi Shi'ite milita gather in the west of Samarra, in the desert of Anbar, as they prepare to depart for Mosul to fight against Islamic State on March 1, 2016. REUTERS / Stringer

BAGHDAD (Reuters) – Iraqi security forces and Shi’ite militia began an operation on Tuesday to dislodge Islamic State militants from desert areas northwest of Baghdad and cut their supply routes between western Anbar province and the northern city of Mosul.

Efforts by the Iraqi government and the U.S.-led coalition backing it to break jihadist control of large swathes of Iraq have shifted towards Mosul, the largest city under Islamic State control. Government forces retook the key cities of Tikrit, Baiji and Ramadi last year.

The new operation, called al-Jazeera Security in reference to the desert area, was launched from west of the northern cities of Tikrit and Samarra, Iraqi security officials said.

“These operations will play a significant role in cutting all the supply routes in areas still under the terrorists’ control,” Brigadier General Yahya Rasool, an Iraqi military spokesman, told state television.

The offensive is intended to drive the militants from open desert used to transport supplies and launch regular attacks on the government-controlled cities of Tikrit and Samarra, the officials said.

It seeks to prevent insurgents from moving from the western areas of Falluja and Thirthar towards Tirkit and Mosul in the north, said Colonel Mohammed al-Asadi, a military spokesman in Salahuddin province, where Tikrit is located.

“Iraqi army, federal police, counter-terrorism forces and Hashid Shaabi are participating in the military campaign and were deployed on the fronts with air support from the Iraqi and coalition air force,” Asadi said.

The Hashid Shaabi is a coalition of mainly Iranian-backed Shi’ite militias mobilized to combat Islamic State.

Islamic State claimed responsibility for the attacks in a statement distributed online by supporters.