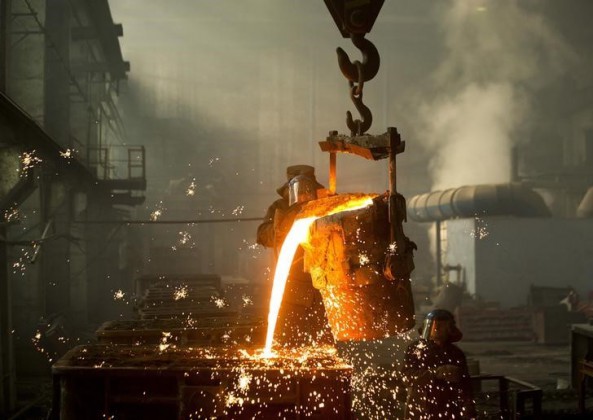 A worker fills molds with molten iron at an iron foundry in Bobruisk, Belarus, on March 11, 2015. REUTERS / Vasily Fedosenko

By Jonathan Cable and Ian Chua

LONDON/SYDNEY (Reuters) – World manufacturing sector growth stagnated in February as falling prices failed to stimulate new orders, pushing factories to trim workforces, and dealing a blow to policymakers who are struggling to stimulate their economies.

Manufacturing output across much of Asia shrank in February while waning throughout Europe and remaining sluggish in the U.S., according to surveys of purchasing managers on Tuesday.

JPMorgan’s Global Manufacturing Purchasing Managers’ Index (PMI), produced with data vendor Markit, slipped to 50.0 last month, right on the level that separates growth from contraction, and down from 50.9 in January.

“Inflows of new business and production volumes barely rose, while the trend in international trade deteriorated,” said David Hensley, a director at JPMorgan. “Market conditions will need to improve in the short run if global manufacturing is to avoid falling back into contraction.”

“If you were looking for evidence of manufacturing growth stabilising then this isn’t it. There were a couple of low spots that are quite surprising,” said Philip Shaw at Investec.

“(But) to get a fuller picture of what is going on we will have to see evidence from the service sector.” Monthly service industry surveys are due later this week.

Tuesday’s downbeat data may sharpen the focus of officials from the world’s leading economies who declared at a weekend G20 meeting they needed to look beyond ultra-low rates and printing money to reanimate growth.

China’s official Purchasing Managers’ Index (PMI) stood at 49.0 in February, down from the previous month’s reading of 49.4 and below the 50-point mark that separates growth from contraction on a monthly basis.

A private survey also showed China’s factories shed jobs at the fastest rate in seven years in February, raising doubts about the government’s ability to reduce industry overcapacity this year without triggering a sharp jump in unemployment.

Sluggish demand and years of overexpansion fueled by debt have weighed on China’s manufacturers, leaving many with large amounts of idle capacity and helping to drag China’s broader economic growth to 25-year lows.

“The big question is do we see a pick up in the second quarter once China does pass through the seasonal disruption, but at the moment there is little hope for that to happen in any significant way,” said Angus Nicholson at brokerage IG.

On Monday, China’s central bank announced it was cutting the amount of cash banks must hold as reserves for the fifth time since February 2015 yet analysts expect it will have to do more, including cutting interest rates this year.

“Risks to our 6.0 percent baseline GDP growth forecast in 2016 remain tilted to the downside,” analysts at Barclays Capital wrote to clients.

Japan’s factories saw their weakest growth in eight months, while Indonesia and Malaysia contracted for the 17th and 11th month respectively, according to private data vendor Markit.

The Markit/Nikkei Final Japan Manufacturing Purchasing Managers Index (PMI) fell to 50.1 in February from 52.3 in January.

India was perhaps the only standout in Asia, and for merely maintaining modest growth driven by cutting prices to attract demand.

Markit’s manufacturing PMI for the euro zone dropped to 51.2 from January’s 52.3.

Although the overall expansion was slightly better than previously thought, Markit’s euro zone PMI will make gloomy reading for the European Central Bank, coming little more than a week before its next policy setting meeting.

“Concerns are growing that the region is facing yet another year of sluggish growth in 2016, or even another downturn. Lacklustre domestic demand is being compounded by a worsening global picture,” said Chris Williamson, Markit’s chief economist.

An additional cut to the ECB’s deposit rate is almost certain on March 10 and there is an even chance the central bank increases the size of its 60 billion euro a month bond buying programme, a Reuters poll found last month. [ECILT/EU]

German manufacturing hardly grew in February with activity falling to its lowest in 15 months.

British factories had their weakest month in nearly three years in February as demand at home slowed and export orders fell.

“The near-stagnation of manufacturing highlights the ongoing fragility of the economic recovery at the start of the year and provides further cover for the Bank of England’s increasingly dovish stance,” Rob Dobson, a senior economist at Markit, said.

U.S. manufacturing activity slowed for a fifth straight month in February, but there were signs the embattled sector was stabilizing, with new orders growth steady and inventories improving.

Markit’s final reading of its U.S. manufacturing sector PMI for Feb was 51.3, down from 52.4 in January. Markit’s manufacturing output index for Feb fell to 51.2 from 53.2 in January and was the lowest since October 2013.

An alternative reading from the U.S. Institute of Supply Management (ISM) showed factory activity contracted in February but at a slower pace than the previous month. ISM said its U.S. PMI rose to 49.5 from 48.2 the month before.

Canadian factory activity was little changed in February though the industry shrank for the seventh month in a row.

Canada was in a mild recession in the first half of 2015 and has struggled to regain momentum as oil prices continue to fall.

Brazil’s manufacturing downturn accelerated in February as higher inflation increased costs across the production chain, suggesting the country’s recession continued to worsen in the first months of 2016.

Brazil’s economy is headed to its worst recession in more than a century, and will return to its pre-crisis size only in 2019, according to a Reuters poll.

However, growth in Mexico’s manufacturing sector accelerated in February to its fastest pace in nine months despite uneven U.S. demand for Mexican factory exports and tanking oil prices which have hit economic growth in Latin America’s no. 2 economy.