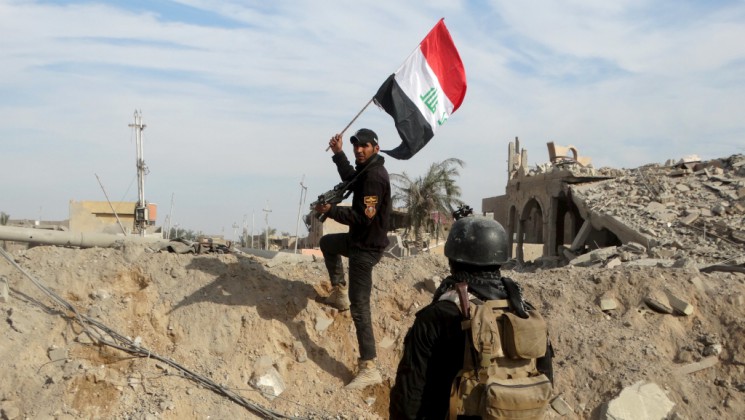 A member from the Iraqi security forces holds an Iraqi flag in the city of Ramadi, December 27, 2015. REUTERS / Stringer

The Iraqi military has scored another pivotal victory in the fight against the Islamic State insurgency, retaking control of a government complex in the important city of Ramadi.

Anbar Governor Sohaib Alrawi announced on Twitter on Monday that the Iraqi flag is now flying above the government compound in the city, which had been captured by Islamic State insurgents in May.

Ramadi is the capital of Anbar, Iraq’s largest province in terms of land area.

Iraqi forces had been aggressively working to recapture Ramadi, and had made major inroads in recent weeks. But the Islamic State insurgency continues to put up a fight, and The Washington Post reported that a military leader said about 30 percent of the city remains under ISIS control.

The military victory drew a mixture of celebration and caution, as the fight is still ongoing.

Col. Steve Warren, the spokesman for the United States-led coalition against the Islamic State, issued a statement congratulating the Iraqi Security Forces for the “significant accomplishment” of clearing and recapturing the government center, which he called “a proud moment for Iraq.”

Warren noted the coalition has conducted more than 630 airstrikes supporting the Iraqi efforts, as well as provided training and equipment to the forces working to defeat the Islamic State.

Warren, who shared photographs of the flag over the complex, said the coalition would continue to support Iraqi forces as they “move forward to make Ramadi safe for civilians to return.”