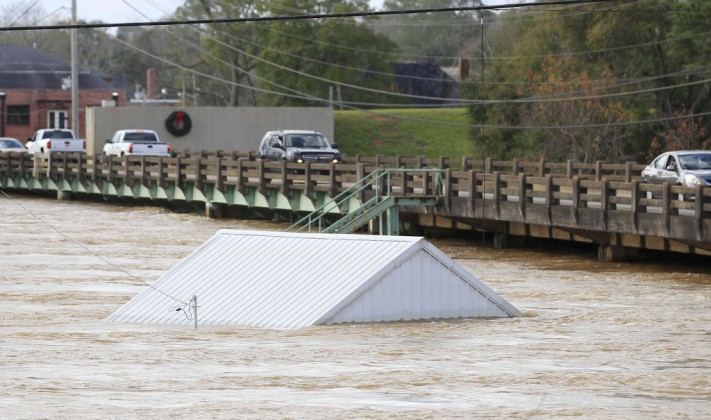 Traffic goes across the bridge on Alabama hwy 87 at the Pea River in Elba, Alabama, December 26, 2015. REUTERS / Marvin Gentry

Editor’s Note: Prophet Rick Joyner warns that when you see strange and extreme weather (record breaking highs, lows, floods, droughts, tornadoes, storms), it is a prophetic sign that the Revelation Days are upon us.

More extreme weather was threatening the United States on Monday morning, as the remnants of the devastating and deadly Winter Storm Goliath continued to move eastward.

The storm system produced the floods and tornadoes that caused at least 43 deaths in recent days, according to Reuters. On Monday, thunderstorms, flooding and winter precipitation was affecting a widespread stretch of the nation, and there were even additional tornado warnings.

There were also active tornado watches in central Alabama and the Florida panhandle as heavy rain and storms continued their push through the area. The more serious tornado warnings had been issued in parts of those states, as well as portions of Mississippi, earlier in the morning.

Most of the 34 gauges with “major flooding” indicated were in the Great Plains, where rainfall was particularly heavy. The NWS reported that certain parts of Texas, Oklahoma, Arkansas and Missouri received more than 10 inches of rain between noon Saturday and 8 a.m. Monday.

That’s led to record flooding in some locations.

The NOAA reported the Illinois River near Tahlequah, Oklahoma, was at 29.92 feet, already two feet above its previous record that was set back in 1950. The river was expected to rise to 31 feet.

More rain was expected to fall later in the day, which could spur additional flooding.

In areas with colder temperatures, that precipitation was falling as snow or freezing rain.

The NWS reported that 18 different locations in New Mexico received more than a foot of snow, including a whopping 41 inches near Bonito Lake in the Sierra Blanca mountains. Many roads in the state remained closed Monday and there were “numerous” people still stranded in vehicles.

Governors in Missouri and New Mexico have declared states of emergency.

On Monday, the snow was expected to fall in the northern United States. Some regions of Wisconsin, Minnesota and Michigan could see 10 inches of snow, the NWS said.

Parts of New York, Pennsylvania, New Jersey and New England were under winter weather advisories as the storm was expected to travel there later Monday and into Tuesday.