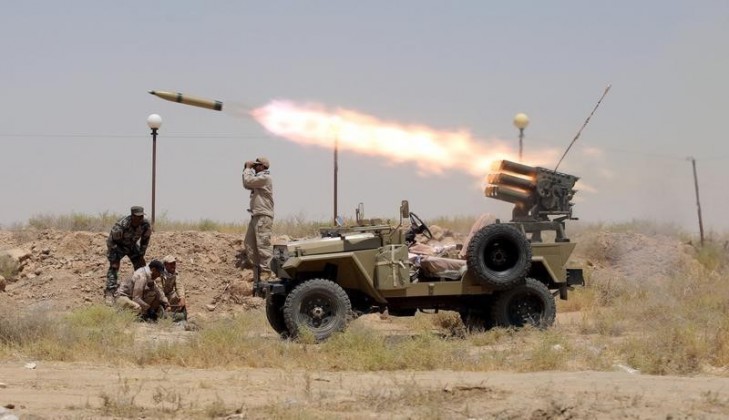 Members of Iraq's Shi'ite paramilitaries launch a rocket towards Islamic State militants in the outskirts of the city of Fallujah, Iraq, on July 12, 2015. REUTERS / Stringer

BAGHDAD (Reuters) – Tens of thousands of trapped Iraqi civilians are running out of food and medicine in the western city of Fallujah, an Islamic State stronghold under siege by security forces, according to local officials and residents.

The Iraqi army, police and Iranian-backed Shi’ite militias – backed by air strikes from a U.S.-led coalition – late last year imposed a near total siege on Fallujah, located 30 miles west of Baghdad in the Euphrates river valley.

The city’s population is suffering from a shortage of food, medicine and fuel, residents and officials told Reuters by phone, and media reports said several people had died due to starvation and poor medical care. Insecurity and poor communications inside the city make those reports difficult to verify.

Sohaib al-Rawi, the governor of Anbar province where Fallujah is located, appealed to the coalition to air-drop humanitarian supplies to the trapped civilians. He said this was the only way to deliver aid after Islamic State mined the entrances to the city and stopped people leaving.

“No force can enter and secure (the delivery) … There is no option but for airplanes to transport aid,” he said in an interview with al-Hadath TV late on Monday, adding the situation was deteriorating by the day.

Fallujah – a long-time bastion of Sunni Muslim jihadists – was the first Iraqi city to fall to Islamic State, in January 2014, six months before the group that emerged from al Qaeda swept through large parts of northern and western Iraq and neighboring Syria.

Since recapturing the city of Ramadi – a further 50 km to the west – from Islamic State a month ago, Iraqi authorities have not made clear whether they will attempt to take Fallujah next or leave it contained while the bulk of their forces head north toward Mosul, the largest city under the militants’ control.

“Security forces managed to control almost all areas around Falluja. This victory has helped to reduce Daesh (Islamic State) attacks outside the city, but it cost too much because civilians now are paying the price,” he said from Ramadi, warning of a potential humanitarian disaster.

A doctor at a hospital in Fallujah said medicine and supplies were running low, especially for post-natal care.

“What is the sin of those born after living in their mothers’ womb without nutrition or protection except from God?” she said.

Spokesmen for the Iraqi army, police and Iranian-backed Shi’ite militias besieging Fallujah were not immediately available to comment.

The U.S.-led coalition battling Islamic State estimates there are around 400 fighters from the ultra-hardline Sunni militant group in Fallujah, though some military analysts put the figure at closer to 1,000.

The coalition, which includes European and Arab powers, dropped food and water in 2014 to members of Iraq’s minority Yazidi community trapped on Mount Sinjar by Islamic State – a humanitarian crisis that sparked the international air campaign.

A Baghdad-based spokesman for the coalition did not rule out a similar operation in Fallujah but said Islamic State’s control of the city made it more challenging.

“The thing about an air-drop is it’s very difficult to control who gets it,” said U.S. Army Col. Steve Warren. “The conditions have to be such that the people who you want to receive the supplies are actually able to receive them and there’s no evidence that that’s the case in Fallujah.”

Rawi, the provincial governor, said Islamic State was using civilians as human shields in Falluja like it did in Ramadi – a tactic that slowed the advance of Iraqi forces.

He said media reports of up to 10 deaths due to starvation and insufficient medical care were accurate, but local officials could not provide details.

The price of food in Fallujah’s markets has rocketed and bakeries have begun rationing bread, residents told Reuters. They said fuel had become scarce during the cold winter months when temperatures drop close to freezing.

One man, who like the other residents declined to be named, said the last time Islamic State distributed basic food items a few weeks ago, much of it had already gone off.

“We’re incredibly worried about the unconfirmed reports of people dying because of lack of medicine and widespread hunger,” she told Reuters.

The United Nations appealed on Sunday for $861 million to help Iraq meet a big funding gap in its 2016 emergency response to the humanitarian crisis caused by the war against Islamic State which has left 10 million people in need of urgent aid.