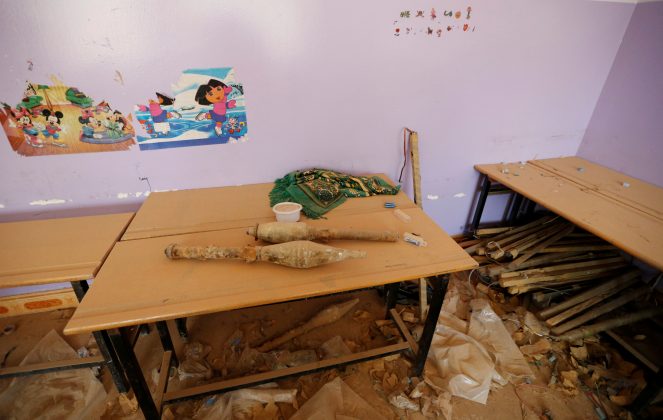 Rocket-propelled grenades left behind by Islamic State militants are seen at a school, following clashes in Falluja, Iraq. REUTERS/Thaier Al-Sudani

BAGHDAD (Reuters) – Islamic State fighters have taken up sniper positions in buildings on the west bank of the Tigris river ahead of an expected government offensive into that side the city, locals said on Wednesday.

Prime Minister Haider al-Abadi said on Tuesday his forces had taken complete control of eastern Mosul, and the commander of the campaign to retake Islamic State’s last major stronghold in Iraq has said preparations to cross the Tigris are under way.

IS fighters have moved in recent days into Mosul’s main medical complex made up of a dozen buildings located between two of the city’s five bridges – positions that can be used for observation and sniper fire, local residents told Reuters.

The tallest is seven storeys, one resident said, asking not to be identified as the militants execute those caught speaking with the outside world.

Some 750,000 people live in western Mosul, according to the United Nations which has voiced grave concerns for civilians in an area beyond the reach of aid organizations.

It took 100,000 Iraqi troops, members of regional Kurdish security forces and Shi’ite Muslim paramilitaries, backed by air and ground support from a U.S.-led coalition, almost 100 days to retake eastern Mosul in what has become the biggest battle in Iraq since the U.S.-led invasion of 2003.

Taking the west side – the location of Mosul’s Grand Mosque where Islamic State leader Abu Bakr al-Baghdadi declared a “caliphate” in 2014 – could prove even tougher as it is crisscrossed by streets too narrow for armored vehicles.

The Sunni Muslim jihadists are expected to put up a fierce fight as they are cornered in a shrinking area but the narrow streets could also deprive them of one of their most effective weapons: suicide-car bombs.

The group released drone footage on Wednesday of cars driving at high speed into clusters of army Humvees and armored vehicles before blowing up.

In some cases, Iraqi soldiers can be seen running away as the car bombs speed toward them. The recordings also show munitions dropped from the drones.

Iraqi forces estimated the number of militants inside Mosul at 5,000-6,000 at the start of the battle, and have said 3,300 have been killed in the fighting.

More than 160,000 civilians have been displaced since the start of the offensive in Mosul, which had a pre-war population of about 2 million, U.N. officials say. Aid agencies estimate the dead and wounded – both civilian and military – at several thousand.

“The reports from inside western Mosul are distressing,” U.N. humanitarian coordinator Lise Grande said on Tuesday.

“Prices of basic food and supplies are soaring … Many families without income are eating only once a day. Others are being forced to burn furniture to stay warm.”