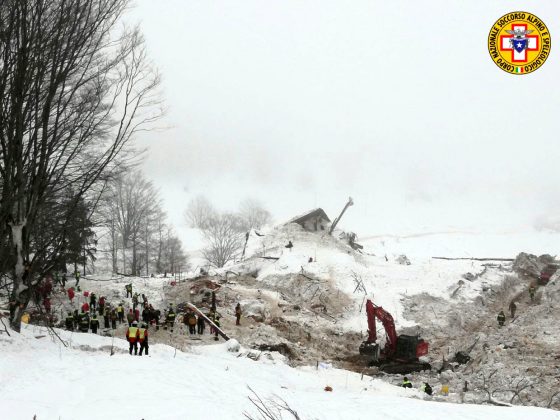 Rescue workers work with excavator at the site of the avalanche-buried Hotel Rigopiano in Farindola, central Italy, hit by an avalanche, in this undated picture released on January 24, 2017 provided by Alpine and Speleological Rescue Team. Soccorso Alpino Speleologico Lazio/Handout via REUTERS

PENNE, Italy (Reuters) – Rescuers have pulled the last of 29 bodies from the wreckage of a hotel in central Italy a week after it was razed by an avalanche, the national fire brigade said on Thursday.

With the discovery on Wednesday night of the bodies of one man and one woman, everyone known to have been at the Hotel Rigopiano when it was flattened has now been accounted for.

Eleven people survived the disaster, which struck in the wake of heavy snowstorms and several powerful earthquakes on Jan. 18. Nine of them, including four children, were extracted shivering after spending days under the crushed masonry.

“When we managed to pull out the survivors it gave us hope and energy,” civil protection agency official Luigi D’Angelo said at an operation base in nearby Penne.

“We never lost that hope, all the way until the end, until we had searched the last centimeter of the hotel.”

Rescuers had to use pickaxes and heavy earth-moving equipment to shift snow and debris and break through the reinforced concrete roof.

Prosecutors have opened an investigation into the tragedy, which Prime Minister Paolo Gentiloni said would establish if anyone was to blame.

Many guests had wanted to leave before the wall of snow struck but were unable to do so because the access road was already blocked.

The opposition 5-Star Movement criticized cuts to local government funding and the scrapping of a rural police force. They said the national emergency prevention and response system had been ill-prepared.

“It isn’t the snow’s fault,” the 5-Star wrote on founder Beppe Grillo’s blog. “The failure of those who should have prevented this disaster and helped the communities in difficulty is clear to everyone.”

Gentiloni has promised to launch an emergency decree and add to reconstruction funds set aside after earthquakes tore through the heart of Italy last year.

(Reporting by Antonio Denti and Roberto Mignucci in Penne and Isla Binnie in Rome; Editing by Kevin Liffey and Richard Lough)