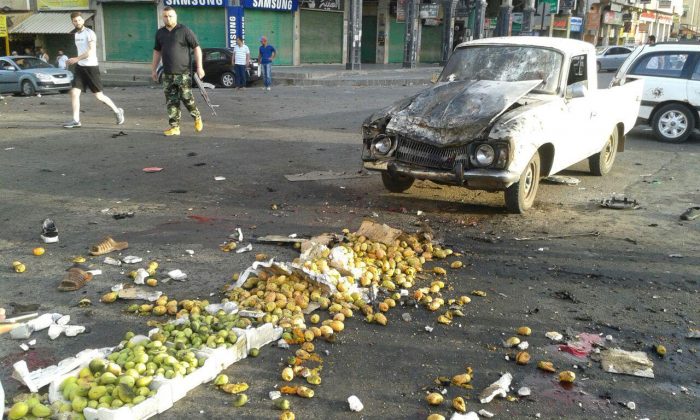 Remains of a suicide bomb are seen in Sweida, Syria July 25, 2018. Sana/Handout via REUTERS

BEIRUT (Reuters) – Islamic State militants killed more than 200 people in a coordinated assault on a government-held area of southwestern Syria on Wednesday, local officials and a war monitor said, in the group’s deadliest attack in the country for years.

Jihadist fighters stormed several villages and staged suicide blasts in the provincial capital Sweida, near one of the few remote pockets still held by Islamic State after it was driven from most of its territory last year.

The head of the Sweida provincial health authority told the pro-Damascus Sham FM that 215 people were killed and 180 injured in the attack, as well as 75 Islamic State fighters.

The jihadists launched simultaneous attacks on several villages northeast of Sweida city, where they clashed with government forces, state media and the Observatory said.

In the city itself, at least two attackers blew themselves up, one near a marketplace and the second in another district, state television said. State news agency SANA said two other militants were killed before they could detonate their bombs.

The Observatory said jihadists seized hostages from the villages they had attacked.

Photographs distributed on social media, which Reuters could not independently verify but which the Observatory said were genuine, purported to show the bodies of Islamic State fighters hanged from street signs by angry residents.

Islamic State lost nearly all the territory it once held in Syria last year in separate offensives by the Russian-backed army and a U.S.-backed militia alliance.

Since then, President Bashar al-Assad has gone on to crush the last remaining rebel enclaves near the cities of Damascus and Homs and swept rebels from the southwest.

The Observatory said government forces had forced the jihadists from all the villages they had stormed from their pocket northeast of the city.

Government troops and allied forces hold all of Sweida province except for that enclave.

With the help of Russian air power, the Syrian army has been hitting Islamic State in a separate pocket further west, near the frontier with the Israeli-occupied Golan Heights.

The Yarmouk Basin in southwest Syria remains in jihadist hands, after an army offensive defeated rebel factions in other parts of the southwest. The operation has focused on Deraa and Quneitra provinces.

(Reporting by Ellen Francis and Tom Perry in Beirut, Hesham Hajali in Cairo, and Kinda Makieh in Damascus; editing by Stephen Powell and David Stamp)