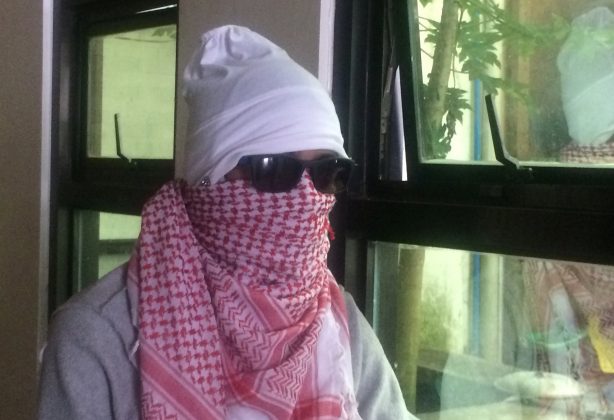 A teenager who fought alongside Islamic-state linked militants in Marawi City, speaks to Reuters during an interview in the southern Philippines July 11, 2017 after fleeing the fighting. REUTERS/Martin Petty

MARAWI CITY, Philippines (Reuters) – When he saw his commander holding the severed head of one of his neighbors, teenage Islamist fighter Jalil knew it was time to escape from Marawi City.

Churches and homes had been ransacked, people had been shot or taken hostage, and now Philippines government troops, planes and helicopters were pounding the Islamic State loyalists who had taken over large parts of the town on May 23.

Six days into the occupation, 17-year-old Jalil said he came across a crowd of fellow fighters led by rebel chief Abdullah Maute, including a boy who looked about 10. They were cheering the beheading of a Christian from Jalil’s neighborhood who was accused of being a spy.

“Abdullah Maute was holding a man’s head, he was shouting ‘Allahu akbar’ (God is Greatest),” said Jalil, who spoke on condition his identity was not revealed to protect him from reprisals. “They chanted with him. At that point, I realized I had to get away. I wanted no part in this.”

Jalil’s story could not be independently verified. Authorities have placed him in pinesprotective custody and say he has helped identify militants fighting in Marawi.

Jalil is one of hundreds of Muslim youths lured by Islamic State followers in Mindanao, a poverty-plagued southern island of the Philippines that governments in Southeast Asia fear could become a regional stronghold for the ultra-radical group as it loses territory in Syria and Iraq.

Rommel Banlaoi, executive director of the Philippine Institute for Peace, Violence and Terrorism Research (PIPVTR), says foreign recruiters have been active in Mindanao for years but Islamic State’s powerful propaganda and the rise of the local Maute clan of militants have brought a surge in followers.

Schools, madrassas (Islamic schools) and even day-care centers with extremist leanings have been identified as recruiting grounds.

Authorities are working with religious teachers to keep radical ideas out of mosques and off curriculums, according to army spokesman Colonel Romeo Brawner. But provincial leaders and some military officers say the efforts are weak, partly because militants have plenty of money to reel youths into their ranks. 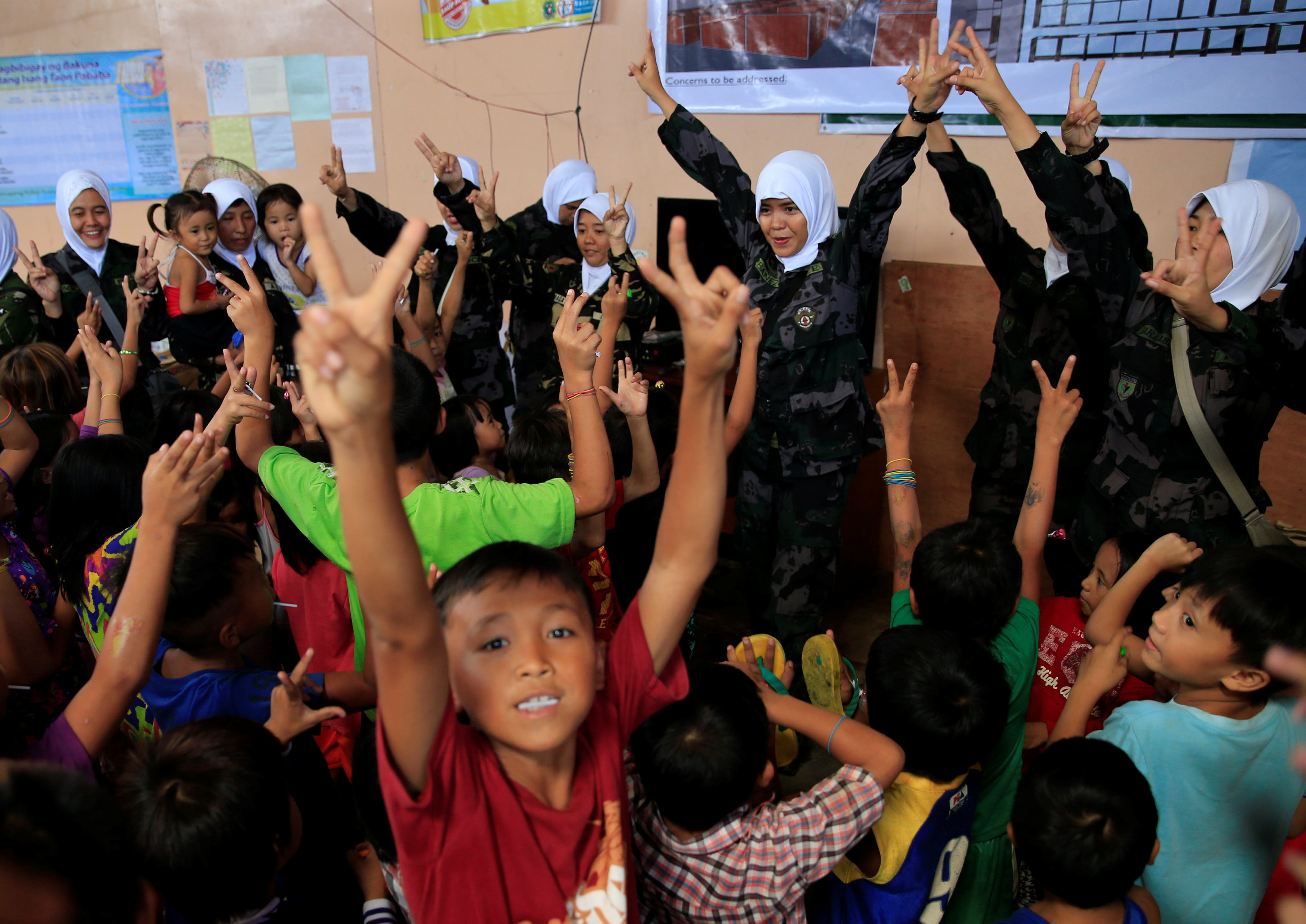 Jalil said his involvement began when he was 11 at a mosque in Piagapo, a rustic municipality 20 km (12 miles) from Marawi, where an imam convinced him to join 40 youngsters at a training camp in return for meals and 15,000 pesos ($294) per month.

He underwent daily weapons and combat training, and teachings from the Koran. He was expelled from the program after only three months, he said, when he revealed details about his network during a mock interrogation.

Jalil heard nothing from his recruiters for six years, but the day before the Marawi siege began, there was a knock at his door. Outside was a teenager, and behind him a pickup truck with 10 other youngsters on board.

“I knew them, they were my classmates in training,” he said. “They told me ‘you’re now back in service.'”

The ubiquitous villages with tattered mosques, wooden homes and dirt-track roads carved into the jungles and mountains of Mindanao are fertile ground for recruiting unschooled youngsters and turning them into militants in camps far off the radar.

The army discovered one such training ground in Piagapo, after a three-day battle that killed 36 Maute fighters, among them foreigners and an imam. That was one month before the Marawi siege.

Reuters spoke to two teenagers from that camp, who said they were lured by promises of money, marriage and paradise after death.

They spoke on condition their full identities be withheld because authorities were not aware of their involvement, which they said ceased when the imam was killed. Their accounts could not be independently verified.

Faisal, 19, said the imam held Koran classes in small jungle huts, while foreigners, whose nationalities he did not know, trained them to fight non-believers.

“The imam told us we would be rewarded with marriage to any beautiful girl we want,” he said.

The government says poor and uneducated males like Abdul and Faisal are easy prey in the Autonomous Region of Muslim Mindanao (ARMM), which comprises five of Mindanao’s 27 provinces.

In 2015-2016, the ARMM had the lowest secondary-school enrolment and the highest dropout rate, according to the education ministry, with just 32.4 percent of ARMM youth in school compared to the national average of 68 percent.

But not all targets are poor, rural and uneducated.

Urban youth and students are also on the radar of recruiters who have infiltrated schools and universities and mastered social media, both to spread propaganda and to spot candidates for radicalization among Mindanao Muslims, known as Moros.

Mohagher Iqbal, the MILF’s top negotiator, said extremists exploit disillusionment with the Bangsamoro plan and promote violence by teaching only selected verses of the Koran.

“We monitor them, but because the recruitment is so secretive, we cannot manage to do everything,” he told Reuters.

Banlaoi said extremists had access to technology used in the Middle East by Islamic State to track chatter on platforms like Facebook and Telegram, find suitable candidates and probe their friend networks. These recruiters included Indonesians and Malaysian militants who were “very persistent”.

The government’s fight is as much about winning hearts and minds among the Bangsamoro people as it is the battle for Marawi that has now ground on for nearly four months.

Militants try to sway public opinion with slick videos celebrating their triumph over “crusaders” they say are destroying Muslim homes and businesses in Marawi with artillery and air strikes.

The military says its focus groups have shown some displaced Marawi children “idolise” the militants. It has sent female soldiers to counsel children in evacuation camps and identify those already radicalized.

Jalil, the teen fighter said he was at first inspired by the rousing speeches of Abdullah Maute and his brother, Omarkhayam. But he was appalled by the bloodletting that ensued.

“I can’t forget what I saw. Every street corner there were dead bodies, Christians and Muslims,” he said.

On the night of the execution he witnesses, Jalil abandoned his post guarding a bridge and rode a motorcycle for 50 km (31 miles) to evade army checkpoints. He turned himself in to police two weeks later.

A former military intelligence officer who has tracked the Maute clan said the military under-estimated them as a “ragtag group”. But the Mautes have demonstrated a capacity to regroup and, thanks to deep pockets and the respect they command among local youth, would probably strengthen after Marawi is retaken by “filling vacancies” left by hundreds of dead fighters.

The worst-case scenario, the officer said, was if the Maute brothers survive. “Recruitment will be massive,” he said. “There are lots of students idolizing them.”