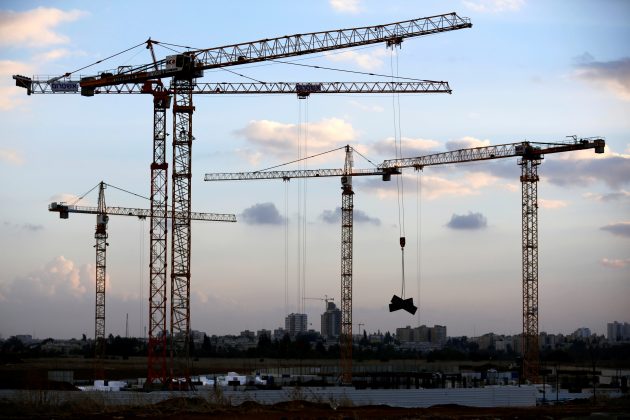 FILE PHOTO: Cranes are seen at a construction site in the new neighbourhood of Carmei Gat in the southern Israeli city of Kiryat Gat November 1, 2016. REUTERS/Amir Cohen/File Photo

JERUSALEM (Reuters) -Israel’s main public sector union said it would go ahead with a planned general strike on Wednesday that would shut down airports, banks and all government offices, in protest over what it says is state inaction over construction site deaths.

The strike, due to start at 6 a.m. (0400 GMT), is meant to be indefinite, but it is likely to last no more than a day since the courts typically order workers back to work and both sides back to the negotiation table.

“We are witnessing more and more casualties every day, new casualties and serious safety incidents that could have been prevented,” Histadrut chief Avi Nissenkorn said on Tuesday.

“If no solution is found in the coming hours, the economy will be hit by a general strike tomorrow.”

A Histadrut spokesman said its representatives were meeting officials from the Finance Ministry and other ministries in a last-ditch effort to avert a strike.

Asked about the situation, a Finance Ministry spokeswoman said: “We are in negotiations. We believe it will be resolved tonight.”

It wants the government to spend an additional 20 million shekels ($5.4 million) on hiring more safety inspectors.

The Finance Ministry says it places a high importance on improving work safety at construction sites and says it is working with the Labour Ministry to implement measures.

Last week the federation threatened strike action if its demands were not met. It said Israeli polling firm Smith had found 66 percent of Israelis supported any strike action.

Among those that would be affected are Tel Aviv’s Ben Gurion Airport and Ovda Airport near Eilat, as well as the Tel Aviv Stock Exchange, Bank of Israel, commercial banks and trains.

The Histadrut says about 40 workers have died on building sites so far in 2018 and 200 others have been seriously injured.

Labour activists say 35 people died in 2017 and the Haaretz newspaper said the number of such deaths in previous years had averaged around 30.

On Tuesday the Histadrut held demonstrations at some 20 main intersections across Israel.