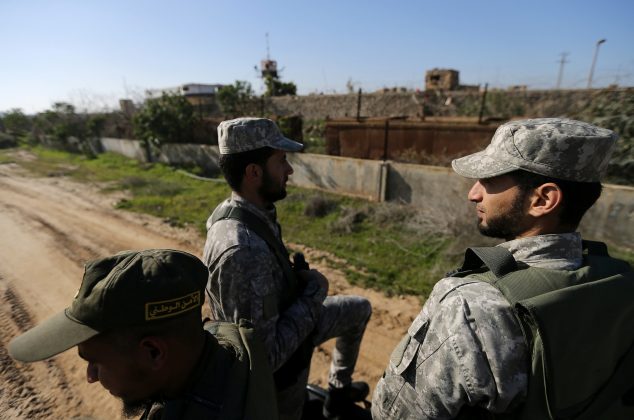 By Nidal al-Mughrabi and Maayan Lubell

GAZA/JERUSALEM (Reuters) – Israel said on Sunday it had destroyed a cross-border attack tunnel that ran from Gaza into Israel and Egypt dug by Hamas, the Islamist group that controls the Palestinian enclave, and that it would destroy all attack tunnels by the year’s end.

Residents in Gaza said Israeli jets bombed an area east of the southern town of Rafah, by the Egyptian and Israeli borders, late on Saturday night. Israel confirmed the attack immediately after, but gave no details until Sunday.

There was no immediate comment from Hamas or Egypt, or any reports of casualties.

Israel says it has developed new means which it has declined to disclose, to find tunnels. Defence Minister Avigdor Lieberman lauded the breakthrough in an interview on commercial television news, saying they would all be destroyed by the end of the year.

“By the end of 2018, we will eliminate all the Hamas attack tunnels … we may even manage to do this sooner, but the task is to destroy them all by the end of the year,” Lieberman said.

Tensions have risen since President Donald Trump reversed decades of U.S. policy on Dec. 6 by recognizing Jerusalem as Israel’s capital. Gaza militants have launched 18 cross-border rockets or mortar bombs, causing no fatalities or serious injuries in Israel, and 15 protesters and two gunmen have been killed by Israeli fire.

The attacks from Gaza, which Israel has blamed on groups not affiliated with Hamas, have drawn Israeli air strikes, usually on targets that have been evacuated.

“There are those who say the Israeli military attacks sand dunes – that is incorrect,” Prime Minister Benjamin Netanyahu, addressing criticism from lawmakers who have called for a stronger armed response, told reporters after the tunnel was targeted.

Netanyahu cautioned Hamas that Israel “will respond with even greater force” if rocket strikes continue. Israel has said Hamas, as the dominant force in Gaza, bears overall responsibility for any attacks from the enclave.

But Yoav Galant, a member of Netanyahu’s security cabinet, said on Army Radio that Israel is “not looking for confrontation with Hamas”. Nonetheless, he said Israel “could not abide by a situation in which Israelis are harmed by fire (from Gaza)”.

Colonel Jonathan Conricus, an Israeli military spokesman, described the target hit on Saturday as 1.5 km (one mile)-lone “terror tunnel” running the Kerem Shalom border crossing into Israel, and into Egypt.

“It could also have served to transfer terrorists from the Gaza Strip into Egypt in order to attack Israeli targets from Egypt,” he said.

Kerem Shalom, the main passage point for goods entering Gaza, was shut down on Saturday before the Israeli attack.

Underground tunnels are used to smuggle in all manner of commercial goods to Gaza, and to bring in weapons for militants from Hamas and other groups. They have also been used by Hamas to launch attacks inside Israel.

The Israeli military said it has destroyed three tunnels in the past two months.

Israel has been constructing a sensor-equipped underground wall along the 60-km (36-mile) Gaza border, aiming to complete the $1.1 billion project by mid-2019.