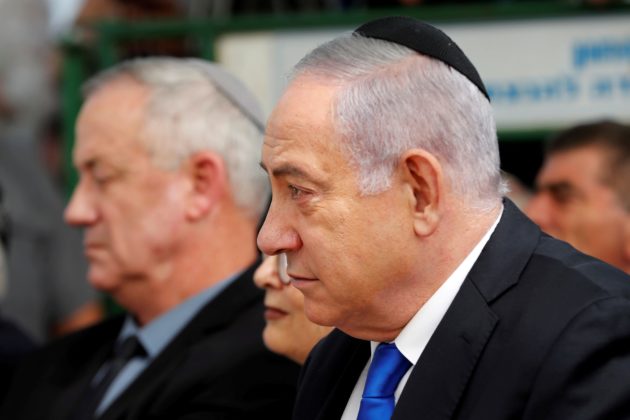 JERUSALEM (Reuters) – Prime Minister Benjamin Netanyahu faced Israeli media headlines on Friday suggesting power is slipping from his grasp after an election in which he trails his main rival with nearly all votes counted.

The right-wing leader failed on Tuesday, for the second time in five months, to secure a clear election victory and the centrist Blue and White party led by ex-armed forces chief Benny Gantz rebuffed his calls to join a unity government on Thursday.

Near-final results released on Friday by the Knesset’s election committee showed Blue and White will be the largest single party in the new parliament with 33 of the 120 seats, with Netanyahu’s Likud winning 31 seats, three less than it had before.

Israeli newspapers and commentators depicted the 69-year-old leader as in a weakened position, with headlines such as: “Himself Alone” and “Political Death Spasms”.

President Reuven Rivlin will on Sunday start consultations with the parties about choosing a leader to put together a coalition.

There were only narrow differences in the two main parties’ campaigns on many important issues, and an end to the Netanyahu era would be unlikely to bring significant changes in policy on relations with the United States, the regional struggle against Iran or the Palestinian conflict.

Palestinian President Mahmoud Abbas appeared to see Israel’s coalition drama as an opportunity for his government in the occupied West Bank to announce election plans.

Abbas told reporters outside Norway’s parliament that he would issue a decree for elections across the West Bank, Gaza Strip and East Jerusalem when he returns to the Palestinian Territories following the U.N. General Assembly in New York.

Despite a long rift with Gaza’s Islamist rulers Hamas, Abbas said his Palestinian Authority, which exercises limited self-rule in the West Bank, would be ready to accept a Hamas victory “because Hamas is a part of our people, we cannot exclude Hamas. They have a right to vote and to nominate themselves.”

Some political analysts said Abbas was unlikely to follow through on his election pledge, pointing to difficulties holding a national vote across Gaza and the West Bank and East Jerusalem, each of which has a different ruling entity.

There have not been any national Palestinian elections for 13 years. Abbas was elected president in 2005 and Hamas won a 2006 parliamentary election, plunging Palestinian politics into a bitter power struggle from which it has not emerged.

One uncertainty is the timing of U.S. President Donald Trump’s long-delayed Middle East peace plan, which was expected soon after Israel’s election, but could unsettle a weakened Netanyahu if released during complex coalition negotiations.

Many political analysts are waiting to see how Netanyahu tries to prolong his political survival, not least to claim a public mandate in the face of possible corruption charges that prosecutors may bring within months. He denies wrongdoing, accusing his critics of mounting a witch-hunt.

In his election campaign, Netanyahu pledged to annex large swaths of the West Bank, territory Israel captured in a 1967 war where Palestinians seek a state along with Gaza and East Jerusalem. The move drew condemnation from world leaders as detrimental to achieving a lasting peace accord.

Gantz has urged redoubled efforts to restart peace talks with the Palestinians but stopped short of any commitment to the statehood they seek. He has spoken less concretely of Israel maintaining security control of the Jordan Valley.

Netanyahu and Gantz will now seek potential coalition allies, prominent among whom is the far-right former defense minister Avigdor Lieberman. He secured eight seats for his Yisrael Beitenu party, making him a potential kingmaker.

The right-wing Yamina won seven seats, the leftist Labor-Gesher six, and the Democratic Union five. The full official results will be published next Wednesday.

(Additional reporting by Nerijus Adomaitis in Oslo, Rami Ayyub in Jerusalem and Ali Sawafta in Ramallah, Editing by Timothy Heritage)