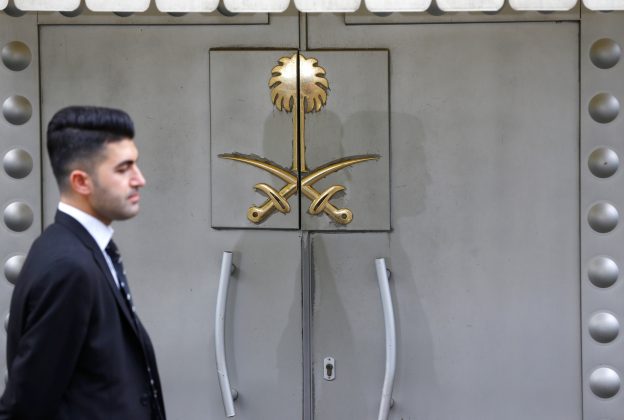 ISTANBUL (Reuters) – Istanbul’s chief prosecutor’s office said on Wednesday that journalist Jamal Khashoggi was suffocated in a premeditated killing as soon as he entered Saudi Arabia’s consulate four weeks ago, and his body was then dismembered and disposed of.

In a statement issued after two days of talks with Saudi Arabia’s public prosecutor Saud al-Mojeb, it also said no concrete results were reached in those meetings.

Khashoggi’s death has escalated into a crisis for Saudi Arabia, the world’s top oil exporter, which at first denied any knowledge of or role in his disappearance on Oct. 2.

Mojeb later said Khashoggi’s killing was premeditated and Riyadh said 18 suspects had been arrested. But Turkey, which released a stream of evidence undermining Riyadh’s early denials, has demanded more details including the whereabouts of Khashoggi’s body and who ordered his killing.

“Despite our well-intentioned efforts to reveal the truth, no concrete results have come out of those meetings,” the Istanbul prosecutor’s office said of the talks on Monday and Tuesday between Mojeb and Istanbul chief prosecutor Irfan Fidan.

The killing of Khashoggi, a critic of de facto ruler Crown Prince Mohammed bin Salman, has put into focus the West’s close relationship with Saudi Arabia – a major arms buyer and lynchpin of Washington’s regional plans to contain Iran.

Riyadh’s European allies have criticized its initial response and U.S. President Donald Trump said Saudi authorities had staged the “worst cover-up ever”, although he has repeatedly said he would not jeopardize U.S. business with the kingdom.

Turkey’s President Tayyip Erdogan, who has demanded more information from Saudi Arabia, said on Tuesday Fidan had asked Mojeb to disclose who sent a 15-strong team from Riyadh which is suspected of involvement in the killing.

The prosecutor’s statement said Fidan also repeated Ankara’s request for the 18 suspects to be extradited to face trial in Turkey, and asked Mojeb to disclose the identity of a “local cooperator” who, according to a Saudi official, disposed of Khashoggi’s body.

In a written response, Mojeb invited Fidan to Saudi Arabia to question the suspects and determine “the fate of the body” and establish whether the killing was premeditated, the Turkish prosecutor’s statement said.

It said Mojeb’s response also distanced Riyadh from the idea that a “local cooperator” had been involved, saying that Saudi authorities had not made an official statement to that effect.

Mojeb left Turkey on Wednesday evening after a three-day visit during which he also held talks at the offices of Turkey’s National Intelligence Agency (MIT).

Turkey’s relations with Saudi Arabia were strained last year when Ankara sent troops to the Gulf state of Qatar in a show of support after its Gulf neighbors, including Saudi Arabia, imposed an embargo on Doha.

Erdogan’s government has pressed Riyadh to conclude its investigation as soon as possible. “The whole truth must be revealed,” Foreign Minister Mevlut Cavusoglu said this week.

Erdogan has also called on Saudi Arabia to disclose who ordered Khashoggi’s killing. “There is no point in procrastinating or trying to save some people from under this,” he told reporters on Tuesday.