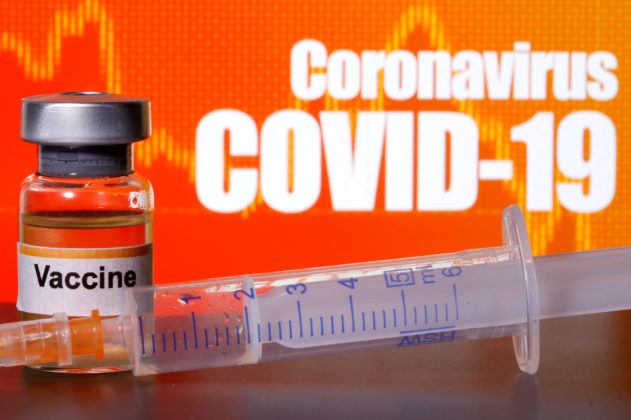 FILE PHOTO: A small bottle labeled with a "Vaccine" sticker stands near a medical syringe in front of displayed "Coronavirus COVID-19" words in this illustration taken April 10, 2020. REUTERS/Dado Ruvic/Illustration

By Francesco Guarascio and Josephine Mason

BRUSSELS/LONDON (Reuters) – The frenetic race to develop a COVID-19 vaccine has intensified safety concerns about an inoculation, prompting governments and drugmakers to raise awareness to ensure their efforts to beat the coronavirus aren’t derailed by public distrust.

There are more than 200 COVID-19 vaccine candidates in development globally, including more than 20 in human clinical trials. U.S. President Donald Trump has vowed to have a shot ready before year’s end, although they typically take 10 years or longer to develop and test for safety and effectiveness.

In the drive to find a potential COVID-19 vaccine “fast is good for politicians,” said Heidi Larson, who leads the Vaccine Confidence Project (VCP), a global surveillance program on vaccine trust. “But from the public perspective, the general sentiment is: ‘too fast can’t be safe'”, she told Reuters.

Regulators around the world have repeatedly said speed will not compromise safety, as quicker results would stem from conducting in parallel trials that are usually done in sequence.

However, these reassurances have failed to convince many, including in Western countries where skepticism about vaccinations was already growing before the pandemic.

Preliminary results of a survey conducted over the last three months in 19 countries showed that only about 70% of British and U.S. respondents would take a COVID-19 vaccine if available, Scott Ratzan, co-leader of ‘Business Partners to CONVINCE’, told Reuters.

Business Partners to CONVINCE, a U.S./UK initiative that is partly government funded, conducted the survey jointly with VCP and the results were broadly in line with a Reuters/Ipsos poll of the U.S. public in May.

“We just see this distrust growing against science and government,” said Ratzan.

“We need to address legitimate concerns about the rapid pace of development, political over-promises and the risks of vaccination.”

The VCP/Business Partners’ survey, expected to be published in a few weeks, will also show that Chinese participants were the most trusting of vaccines, while Russians were the least so, Ratzan said.

Drugmakers and governments had hoped the scale of the COVID-19 crisis would allay concerns about vaccines, which they see as crucial to defeating the pandemic and enabling economies to fully recover from its impact.

Vaccine hesitancy – or the reluctance or refusal to be vaccinated – is also known as “anti-vax,” a term that is sometimes associated with conspiracy theories when often it simply reflects many people’s concerns about side-effects or industry ethics.

In January 2019 the World Health Organisation named vaccine hesitancy as one of the top 10 global health threats for that year.

In Europe, skepticism among the public was high before the pandemic due to a range of factors including negative coverage of pharmaceutical companies as well as false theories including suggested links between childhood immunizations and autism.

Only 70% of French people considered vaccines safe in a 2018 survey commissioned by the European Union executive. The EU average was 82%, but trust fell to 68% for the shot against seasonal flu.

The VCP project on vaccine trust, funded by the European Commission and pharmaceutical companies among others, aims to identify early signs and causes of public mistrust and tackle them with information campaigns before it is too late.

Larson said headlines referring to Warp Speed – the name of the U.S. operation aimed at delivering a COVID-19 vaccine to the U.S. population by next year – could increase vaccine hesitancy even more than perceptions that the disease could become less lethal.

“One of the most frequent things that comes up in people’s conversations is concerns about how quick it is. If I have to pick one theme that is more recurrent than others it is this one,” Larson said.

Data collected by VCP from social media show that by the end of June about 40% of Britons’ posts concerning a COVID-19 vaccine, for example, were negative, with many distrusting any coronavirus vaccine and the medical establishment.

Announcements about fast progress in COVID vaccines in Russia and China in particular could also contribute to rising skepticism. “We don’t have transparency and don’t know how accurate or valid their data are,” Ratzan said, adding that errors there could boost skepticism elsewhere.

Key for any information campaign to be successful is to tailor it to different audiences as there is no uniform profile of anti-vaxxers, said Kate Elder of Doctors Without Borders, a non-governmental organisation.

“They go from the highly educated to those who don’t believe in science,” she said, urging politicians to be more careful in their messages on vaccines and to better explain the reasons behind potentially fast results against COVID-19.

“We are exploring the idea of a chatbot that will speak in different languages,” said Ratzan, adding it could be something similar to Smokey Bear, the U.S. Forest Service’s campaign to educate about preventing wildfires.

“Different parts of the world will require different strategies. We know we need to tailor it and to be specific,” he said.

Risks are high if hesitancy is not addressed quickly.

During the 2009 swine flu pandemic, growing skepticism about the vaccine led to a failure of the vaccination campaign in France, where only 8% of the population got a shot against the virus which is estimated to have killed around 280,000 people across the world.

A study published in May in the Lancet by a group of French scientists warned of similar risks now in the country where vaccine hesitancy went up from 18% in mid-March when a lockdown was imposed on the French to 26% by the end of that month.

“Distrust is likely to become an issue when the vaccine will be made available,” the scientists concluded.

(Reporting by Francesco Guarascio @fraguarascio in Brussels and Josephine Mason in London; Editing by Susan Fenton)