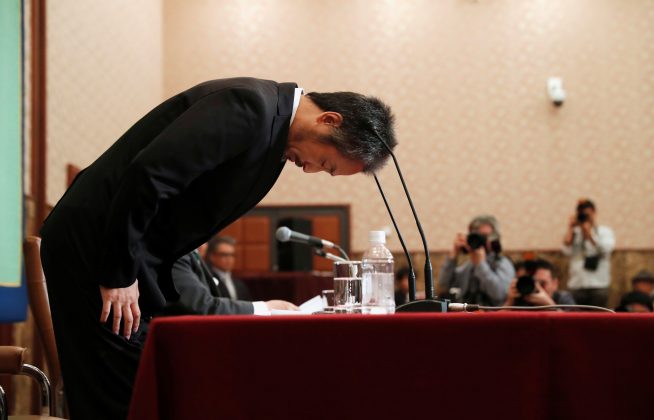 Jumpei Yasuda, the Japanese journalist held in Syria for more than three years, bows during a news conference for the first time since his release last month, at the Japan National Press Club in Tokyo, Japan November 2, 2018. REUTERS/Issei Kato

TOKYO (Reuters) – Jumpei Yasuda, a Japanese journalist held by militants in Syria for more than three years, said on Friday he told his captors to deafen him if they suspected he was eavesdropping on their conversations.

Yasuda, 44, said it was one of the darkest moments before his release last month, ending what he called 40 months of physical and psychological “hell”.

“I told them to burst my eardrums and destroy my ears if they don’t like to be heard so much,” the freelance journalist said at the first news conference since his return on Oct 25.

Wearing a black suit and dark blue necktie, and with his greying beard trimmed short, Yasuda bowed in front of reporters and rows of television cameras before taking questions.

Yasuda said he was fully accountable for his actions.

“I would like to offer my apology and express my gratitude to those who worked for my release, and who were worried about me,” he said in a somber voice.

“I am very sorry that my conduct has had the Japanese government involved in this matter,” Yasuda added.

He was captured almost immediately after entering Syria on foot from Turkey in June 2015 and moved from one detention facility to another routinely over the 40 months.

At one location, he was not allowed to make any noise — even the sound of breathing through his nose or cracking of his knuckles — making it virtually impossible for him to move.

“In their logic, my making noise seemed to mean I moved to eavesdrop on what’s going on. So, whenever I made noise, they started doing things like torture (other hostages) and turn off the light,” Yasuda said.

At one point, he didn’t eat for 20 days in an effort to avoid any movement. It left him thin and nauseated.

He later converted to Islam because it allowed him more freedom of movement.

“As a Muslim, you must pray five times a day. As I could move only twice a day during meal time, conversion to Islam meant five additional occasions for me to move,” he said. 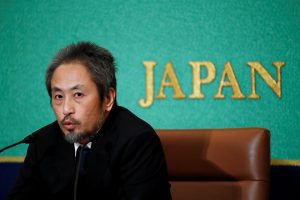 Jumpei Yasuda, the Japanese journalist held in Syria for more than three years, addresses a news conference for the first time since his release last month, at the Japan National Press Club in Tokyo, Japan November 2, 2018. REUTERS/Issei Kato

It was not the first time Yasuda had been detained in the Middle East. He was held in Iraq in 2004 and criticized at home for drawing the government into negotiations for his release.

Yasuda’s latest release, which made front-page news in Japan, rekindled debate about reporting from war zones that some see as reckless adventure and others as courageous journalism.

“My own conduct caused trouble for the Japanese government as well as many people. It is only natural I take criticism,” Yasuda said.

However, he defended the need for on-the-ground reporting in conflict zones.

“States kill people in war. Information is absolutely necessary for people to decide if such an act is acceptable,” Yasuda said. “Information for that purpose should come not only from the states involved but from a third party as well.”

Prime Minister Shinzo Abe thanked Qatar and Turkey for their cooperation after Yasuda was released, but Japan’s government said it did not pay a ransom.

Japanese media have reported he was held hostage by the Nusra Front, but Yasuda said he was not told the identity of his captors and he had no idea what had triggered his release.

Asked if he would go back to war reporting, Yasuda said he didn’t know.

“I am thinking I should be good to my parents. So, I could be more cautious in the way I conduct my reporting from now on.”