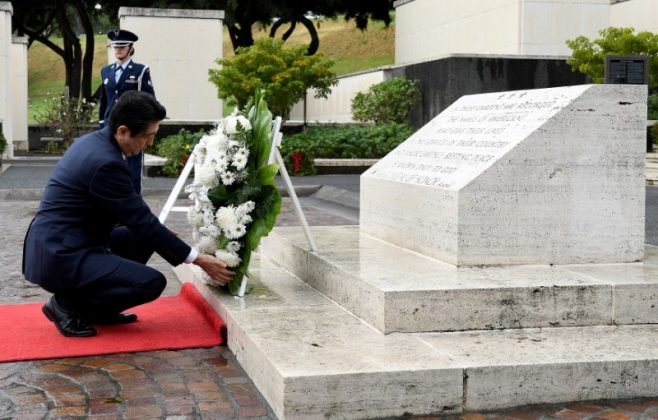 HONOLULU (Reuters) – Japanese Prime Minister Shinzo Abe on Monday stopped at several memorials in Hawaii, one day before he visits the site of the 1941 bombing of Pearl Harbor during a trip intended to show a strong alliance between his country and the United States.

Abe made no public remarks and stood in silence before a wreath of flowers at the National Memorial Cemetery of the Pacific, a memorial to those who died while serving in the U.S. Armed Forces.

Abe, joined by two of his Cabinet members, bowed his head before wreaths of white flowers and greenery laid at the feet of stone monuments at Makiki Cemetery in Honolulu dedicated to Japanese who settled in Hawaii in the 1800s.

The crowning event of the trip comes Tuesday, when Abe and U.S. President Barack Obama will visit Pearl Harbor, the site of the Japanese attack 75 years ago that drew the United States into World War Two. Obama, who was born in Hawaii, is spending his winter vacation there.

Abe does not plan to apologize for the 1941 attack but to console the souls of those who died in the war, his aides said this month.

Japan hopes to present a strong alliance with the United States amid concerns about China’s expanding military capability. Japan was monitoring a group of Chinese warships that entered the top half of the South China Sea earlier on Monday.

“I am very much looking forward to sending out a strong message on the value of reconciliation, as well as our sincere prayer for the souls of the war dead,” Abe, speaking through an interpreter, said at the Hawaii Convention Center in Honolulu.

Abe has called U.S.-Japan relations an “alliance of hope” and said the devastation of war should not be repeated.

In China, where the government has repeatedly urged Japan to show greater repentance for World War Two and Japan’s invasion of China, Foreign Ministry spokeswoman Hua Chunying said it was “wishful thinking” for Abe if he hoped to use the visit to “settle the accounts” for the war.

“No matter the posture, no matter what show is put on, only sincere reflection can realize the key to reconciliation,” Hua told reporters.

Japanese leaders hope to send a message of unity as well to President-elect Donald Trump, who triggered concerns before his Nov. 8 election by opposing the U.S.-led Trans-Pacific Partnership trade pact and threatening to force allied countries to pay more to host U.S. forces.

Abe has tightened ties with Washington during his four years in office, stretching the limits of Japan’s pacifist constitution and boosting defense spending.

Amid wind and rain on Monday, Abe presented a wreath at the armed forces memorial located at Honolulu’s Punchbowl Crater. After a moment of silence, he signed a guestbook and then stopped at the grave of former U.S. Senator Daniel Inouye, who fought in World War II in Europe and whose parents were Japanese. He died in 2012.

Abe’s visit will come seven months after Obama became the first serving U.S. president to visit the Japanese city of Hiroshima, where the United States dropped an atomic bomb in the closing days of the war in 1945.

At least three Japanese premiers have visited Pearl Harbor, but the Japanese government says Abe will be the first to pray for the dead with a U.S. president at the memorial built over the remains of the sunken battleship USS Arizona.

(Reporting by Emily Stephenson, additional reporting by Hugh Gentry, and by Linda Sieg in Tokyo and Ben Blanchard in Beijing; Editing by Lisa Shumaker and Nick Macfie)