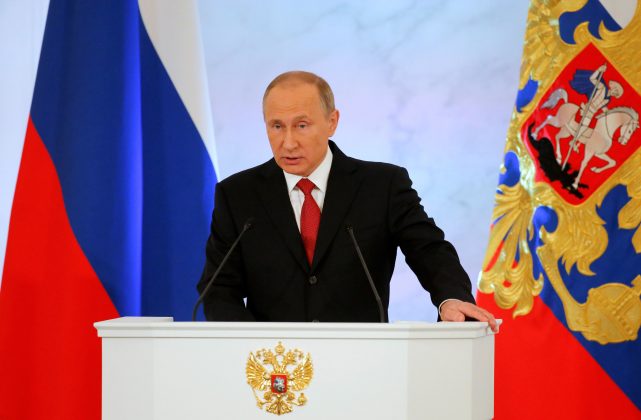 Russian President Vladimir Putin delivers a speech during his annual state of the nation address at the Kremlin in Moscow, Russia, December 1, 2016. REUTERS/Maxim Shemetov

MOSCOW (Reuters) – Russia said on Tuesday that a U.S. decision to ease restrictions on arming Syrian rebels had opened the way for deliveries of shoulder-fired anti-aircraft missiles, a move it said would directly threaten Russian forces in Syria.

Moscow last year launched a campaign of airstrikes in Syria to help President Bashar al-Assad and his forces retake territory lost to rebels, some of whom are supported by the United States.

Foreign Ministry spokeswoman Maria Zakharova said the policy change easing restrictions on weapons supplies had been set out in a new U.S. defence spending bill and that Moscow regarded the step as a hostile act.

“Washington has placed its bets on supplying military aid to anti-government forces who don’t differ than much from bloodthirsty head choppers. Now, the possibility of supplying them with weapons, including mobile anti-aircraft complexes, has been written into this new bill,” Zakharova said in a statement.

“In the administration of B. Obama they must understand that any weapons handed over will quickly end up in the hands of jihadists,” she added, saying that perhaps that was what the White House was counting on happening.

The U.S. decision was a direct threat to the Russian air force, to other Russian military personnel, and to Russia’s embassy in Damascus, said Zakharova.

“We therefore view the step as a hostile act.

Zakharova accused the Obama administration of trying to “put a mine” under the incoming administration of President-elect Donald Trump by attempting to get it to continue what she called Washington’s “anti-Russian line.”

The Obama administration has in recent weeks expanded the list of Russians affected by U.S. sanctions imposed on Moscow over its actions in Ukraine.

Trump, during his election campaign, said he was keen to try to improve relations with Moscow and spoke positively about President Vladimir Putin’s leadership skills.

A back-and-forth exchange between Trump and Putin over nuclear weapons last week tested the Republican’s promises to improve relations with Russia however.

The Obama administration and U.S. intelligence officials have accused Russia of trying to interfere with the U.S. election by hacking Democratic Party accounts.

“The current occupants of the White House imagined that they could pressure Russia,” said Zakharova. “Let’s hope that those who replace them will be wiser.”

(Additional reporting by Peter Hobson in Moscow and Tom Perry in Beirut; Editing by Raissa Kasolowsky)