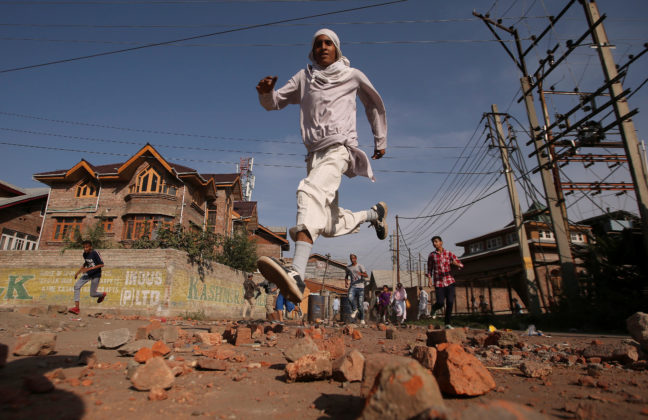 FILE PHOTO: Kashmiris run for cover as Indian security forces (not pictured) fire teargas shells during clashes, after scrapping of the special constitutional status for Kashmir by the Indian government, in Srinagar, September 6, 2019. REUTERS/Danish Ismail/File Photo

SRINAGAR, India/MUZAFFARABAD, Pakistan (Reuters) – Villagers living on both sides of the Line of Control dividing the Himalayan region of Kashmir welcomed an agreement between long-time foes India and Pakistan to stop shelling from each side, but some were skeptical it would hold.

The nuclear-armed neighbors signed a ceasefire agreement along the Line of Control (LoC) in 2003, but that has frayed in recent years and there have been mounting casualties.

In a joint statement on Thursday, India and Pakistan said they would observe a ceasefire.

“It has given a new lease of life to us. We were living in constant fear of being hit,” said Laldin Khatana, the headman of Churnada village on the Indian side of the border.

Khatana said that two people had been killed last year by shelling in the hillside village, home to 1,600 people, many of whom gathered at a mausoleum to celebrate the new agreement.

“It was affecting our farming and grazing,” he told Reuters via telephone. “And children were scared to go to school.”

Kashmir has long been a flashpoint between India and Pakistan, which claim the region in full but rule only in part. Tensions reignited after New Delhi withdrew the autonomy of Jammu and Kashmir state in August 2019 and split it into two federally administered territories.

Since 2018, Indian data shows that 70 civilians and 72 soldiers have been killed in cross-border firing.

On the Pakistani side, nearly 300 civilians have been killed since 2014, when ceasefire violations began rising, according to a Pakistan military source.

“The fresh announcement is welcome and can help us live a life free of fear, only if implemented in letter and in spirit,” said Danish Shaikh, a resident of Ban Chattar village in Pakistan-controlled Kashmir’s Neelum valley.

“Who knows how seriously and how long they will stick to the fresh understanding?”

The picturesque Neelum valley saw hundreds of hotels and guesthouses sprout up when the ceasefire held, with tourists visiting year round.

But with skirmishes and firing increasing, tourism went into a tailspin and guesthouse operators like Khawaja Owais were forced to dig into their savings.

“This is good news indeed. Not just for us who are running businesses in the valley but for everyone who has faced death and destruction during heavy shelling,” Owais said of the agreement.