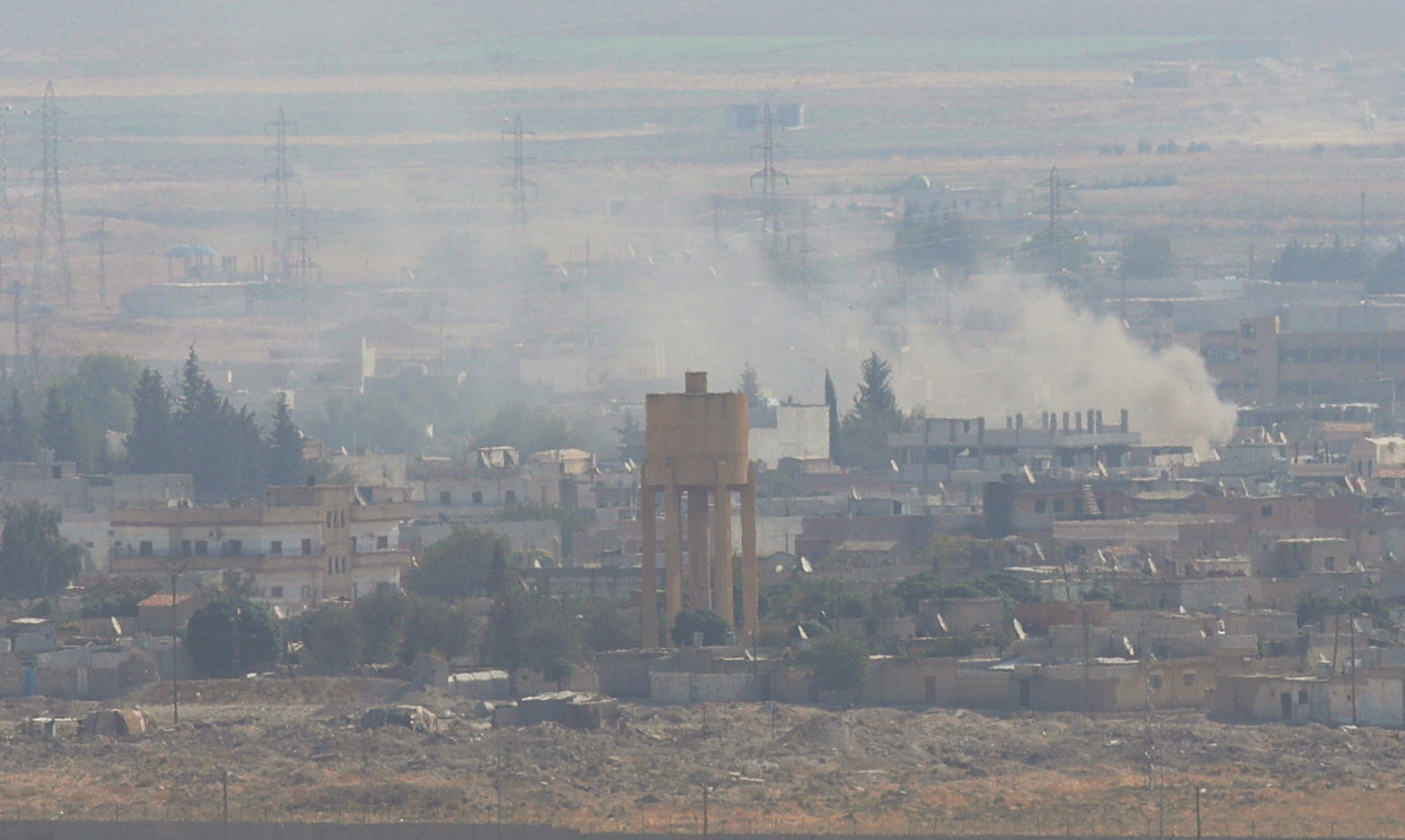 Shells fall in northeast Syria despite five-day ceasefire agreement
CEYLANPINAR, Turkey (Reuters) – Shelling could be heard at the Syrian-Turkish border on Friday morning despite a five-day ceasefire agreed between Turkey and the United States, and Washington said the deal covered only a small part of the territory Ankara aims to seize.

Reuters journalists at the border heard machine-gun fire and shelling and saw smoke rising from the Syrian border battlefield city of Ras al Ain, although the sounds of fighting had subsided by mid-morning.

The truce, announced on Thursday by U.S. Vice President Mike Pence after talks in Ankara with Turkish President Tayyip Erdogan, sets out a five-day pause to let the Kurdish-led SDF militia withdraw from an area controlled by Turkish forces.

The SDF said air and artillery attacks continued to target its positions and civilian targets in Ral al Ain.

“Turkey is violating the ceasefire agreement by continuing to attack the town since last night,” SDF spokesman Mustafa Bali tweeted.

The Kurdish-led administration in the area said Turkish truce violations in Ras al Ain had caused casualties, without giving details.

The deal was aimed at easing a crisis that saw President Donald Trump order a hasty and unexpected U.S. retreat, which his critics say amounted to abandoning loyal Kurdish allies that fought for years alongside U.S. troops against Islamic State.

Trump has praised the deal, saying it would save “millions of lives”. White House spokeswoman Stephanie Grisham told Fox News the ceasefire was successful even if halting fighting “takes time”.

Turkey cast it as a complete victory in its campaign to control a strip of territory stretching hundreds of miles along the border and more than 30 km (around 20 miles) deep into Syria, to drive out fighters from the YPG, the SDF’s main Kurdish component.

“As of now, the 120-hour period is on. In this 120-hour period, the terrorist organization, the YPG, will leave the area we identified as a safe zone,” Erdogan told reporters after Friday prayers in Istanbul. The safe zone would be 32 km deep, and run “440 km from the very west to the east,” he said.

But the U.S. special envoy for Syria, James Jeffrey, said the agreement covered only a smaller area where Turkish forces were already operating, without giving details of how far along the border Washington believed it stretched.

The Kurds said it was limited to a small strip between two border towns that have seen the bulk of the fighting: Ras al Ain and Tal Abyad, just 120 km away.

With the United States pulling its entire 1,000-strong contingent from northern Syria, the extent of Turkey’s ambitions is likely to be determined by Russia and Iran, filling the vacuum created by the U.S. retreat.

The government of President Bashar al-Assad, backed by Moscow and Tehran, has already taken up positions in territory formerly protected by Washington, invited by the Kurds.

Jeffrey acknowledged that Turkey was now negotiating with Moscow and Damascus over control of areas where Washington was pulling out, which were not covered by the U.S.-Turkish ceasefire agreement.

“As you know we have a very convoluted situation now with Russian, Syrian army, Turkish, American, SDF and some Daesh (Islamic State) elements all floating around in a very wild way,” Jeffrey said.

“Now, the Turks have their own discussions going on with the Russians and the Syrians in other areas of the northeast and in Manbij to the west of the Euphrates,” he said. “Whether they incorporate that later into a Turkish-controlled safe zone, it was not discussed in any detail.”

Pence said U.S. sanctions imposed on Tuesday would be lifted once the ceasefire became permanent.

In Washington, U.S. senators who have criticized the Trump administration for failing to prevent the Turkish assault in the first place said they would press ahead with legislation to impose sanctions against Turkey.

The Turkish assault began after Trump moved U.S. troops out of the way following an Oct. 6 phone call with Erdogan.

It has created a new humanitarian crisis in Syria with – according to Red Cross estimates – 200,000 civilians taking flight, a security alert over thousands of Islamic State fighters potentially abandoned in Kurdish jails, and a political storm at home for Trump.

Turkey says the “safe zone” would make room to settle up to 2 million Syrian refugees it is currently hosting, and would push back the YPG militia which it deems a terrorist group because of its links to Kurdish insurgents in southeast Turkey.

A Turkish official told Reuters that Ankara got “exactly what we wanted” from the talks with the United States. 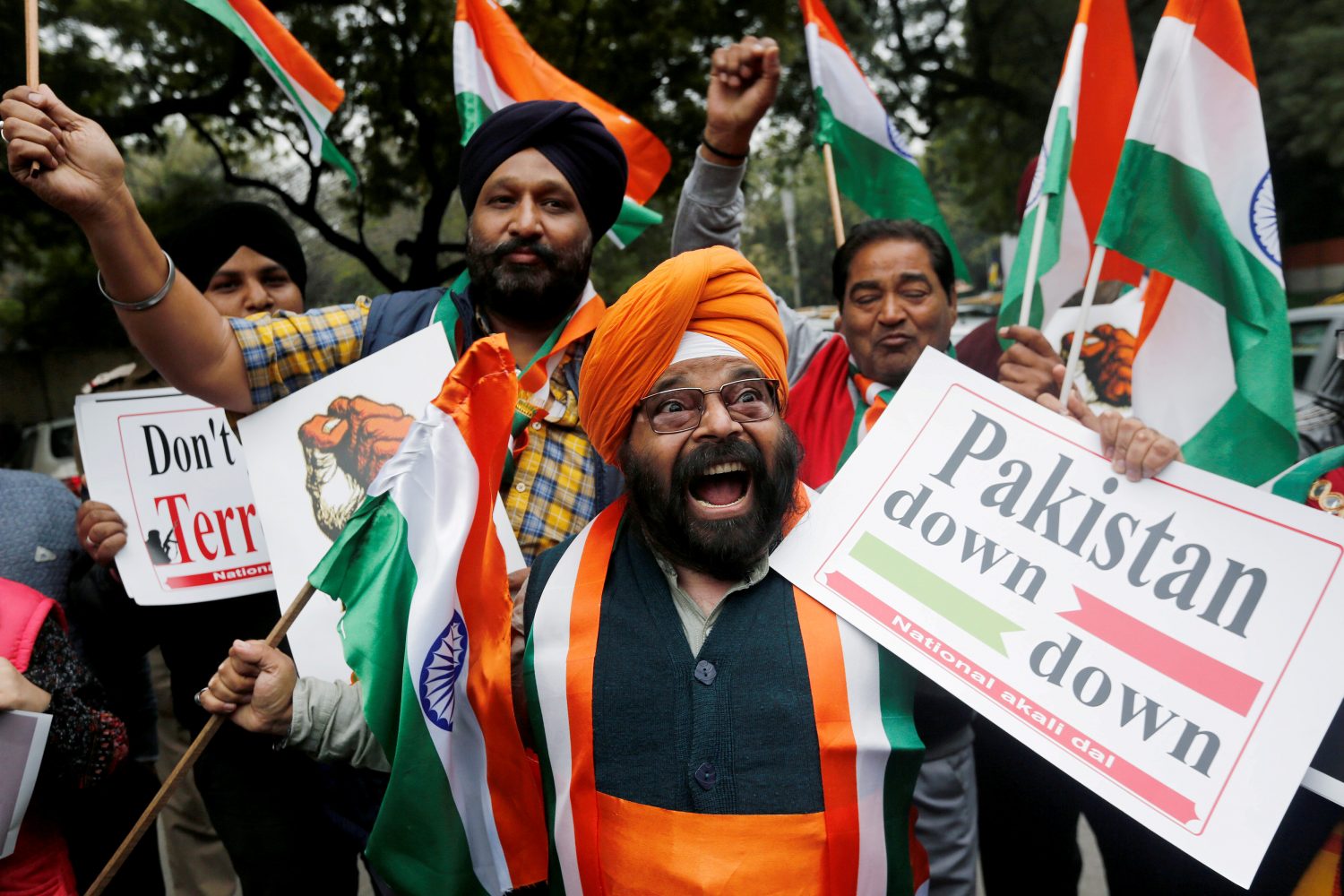 NEW DELHI (Reuters) – An air strike by Indian warplanes inside Pakistan last week, and a subsequent retaliatory attack by the Pakistani air force, pushed the nuclear-armed neighbors to the brink of another war, but also triggered a fight over the truth about events.

Below is a look at claims and counter claims from both sides. They disagree on most aspects.

The escalation in tension came after a suicide car bombing killed 40 paramilitary troops in Pulwama in Indian-administered Kashmir, a mountainous region also claimed by Pakistan, on Feb. 14.

India blames Pakistan for the attack, which was claimed by a Pakistan-based militant group Jaish-e-Mohammad (JeM), and says it has provided Pakistan with proof.

India’s foreign ministry said in a statement on Feb. 27 that a dossier was handed over to Pakistan with “specific details of JeM complicity in Pulwama terror attack and the presence of JeM terror camps and its leadership in Pakistan”.

Pakistan has denied the accusation, saying it had nothing to do with the Pulwama bombing, which came right before a high-profile visit by Saudi Crown Prince Mohammed bin Salman to Islamabad on Feb. 17.

Pakistan Prime Minister Imran Khan told parliament on Feb. 28: “We had such an important visit of the Saudi crown prince coming up. We knew that they would invest, there were contracts. Which country would sabotage such an important event by conducting a terror attack?” 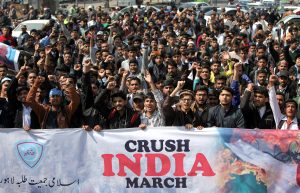 India said its warplanes struck a JeM training camp near the Pakistani town of Balakot in the early hours of Feb. 26, acting on intelligence that the militant group was planning another suicide attack.

“In this operation, a very large number of JeM terrorists, trainers, senior commanders and groups of jihadis who were being trained for fidayeen action were eliminated,” India’s Foreign Secretary Vijay Gokhale said in a briefing after the air strike. Fidayeen is a term used to describe Islamist militants willing to fight to the death.

Pakistan acknowledged that Indian jets had crossed into its territory, but denied they had hit anything substantial. Under forced hasty withdrawal, Indian aircraft “released payload which had free fall in open area. No infrastructure got hit, no casualties”, the Pakistan military spokesman, Major General Asif Ghafoor, said in a tweet.

In New Delhi, a senior government official told reporters that at least 300 militants had been killed, although India’s defense forces have since said they are unable to provide any detail on the number of casualties.

“We hit our target,” the chief of the Indian air force (IAF), B.S. Dhanoa, said on Monday. “The air force doesn&rsquo;t calculate casualty numbers, the government does that.”

On Feb. 27, Pakistan said its air force had locked on to six targets in Indian-administered Kashmir in retaliation for the Indian air strikes the day before. It said it did this to show it could strike key targets but said its pilots deliberately dropped their bombs in open country without causing damage. It said its aircraft did not enter Indian airspace.

Pakistan said it had downed two Indian jets, one of which came down in Pakistani-held territory and the other on the Indian side of the border. It said it had captured two Indian air force pilots. Later, it clarified to say it had only one Indian pilot in its custody. He was later handed over to India.

India said it had detected a “large package” of Pakistan air force jets coming towards Indian territory, and sent up its own fighter aircraft to intercept them.

In the ensuing engagement, India lost a MiG-21 Bison, the IAF said, adding it also shot down a U.S.-built F-16 jet. India denies that it lost a second jet.

On Feb. 28, Indian defense officials displayed what they said were parts of an AMRAAM air-to-air missile that is carried only on the F-16s in the Pakistani air force.

India’s foreign ministry said that there was a “violation of the Indian air space by Pakistan air force and targeting of Indian military posts”.

Pakistan’s military has denied it used F-16s in the attack on India and says it has not lost any of its aircraft.

In the past week, India and Pakistan have accused each other of regularly violating a ceasefire agreement along the 740-km (460-mile) Line of Control (LoC), which serves as a de-facto border between the two countries in the disputed Kashmir region.

For example, last Thursday, India said Pakistan had begun firing on at least three occasions, violating the ceasefire, killing one civilian on the Indian side.

Pakistani authorities said the ceasefire violations were by India, and four civilians had been killed in Pakistan in what they called a “deliberate” attack by Indian forces.