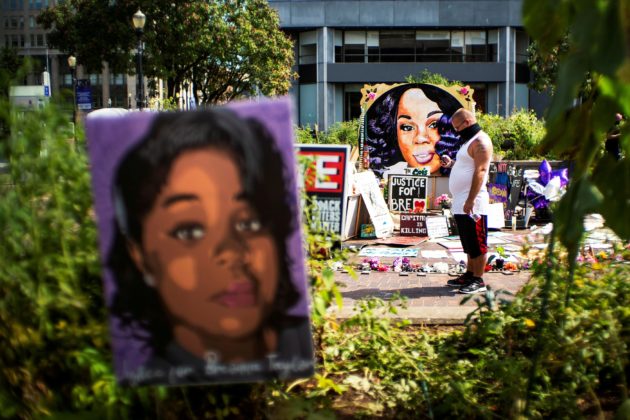 FILE PHOTO: A man pauses at the memorial of Breonna Taylor before a march, after a grand jury decided not to bring homicide charges against police officers involved in the fatal shooting of Taylor in her apartment, in Louisville, Kentucky, U.S. September 25, 2020. REUTERS/Eduardo Munoz

(Reuters) – Kentucky’s attorney general, who presented evidence to a grand jury in the police shooting death of Breonna Taylor, did not recommend any charges against the two police officers who shot her, saying the grand jury needed to make that decision on its own.

The revelation, in a Louisville television interview, pre-empted one of the main points of interest that was set to be unveiled on Wednesday when a recording of the 20-plus hours of proceedings was due to be made public.

However, a judge agreed to delay the release of the recording, giving the state until midday Friday to redact witnesses’ names, the attorney general’s office said on Wednesday afternoon.

Under public pressure to show the evidence he presented in a case that has captured national attention and prompted protests, Attorney General Daniel Cameron told WDRB television in an interview on Tuesday that he recommended only one charge against the three officers who opened fired. The grand jury took his guidance and indicted one officer for endangerment last week.

“They (the grand jury) are an independent body. If they wanted to make an assessment about different charges, they could have done that. But our recommendation was that (Jonathan) Mattingly and (Myles) Cosgrove were justified in their acts and their conduct,” Cameron said.

The case of Breonna Taylor, a 26-year-old Black woman, has revived street protests across the United States against racism and police brutality, further polarizing the country as some voters are already casting early ballots in the Nov. 3 presidential election.

The shooting took place while police were executing a search warrant in a drug investigation involving Taylor’s ex-boyfriend. When the officers burst into her home in the early morning hours of March 13, Taylor’s current boyfriend fired once, wounding one officer. Three officers responded with 32 rounds, six of which hit Taylor.

The grand jury decided against indicting either Mattingly or Cosgrove, who were placed on administrative leave. Instead it indicted a third white officer, Brett Hankison, for wanton endangerment for stray bullets that hit a neighboring apartment. Hankison was fired in June.

Cameron has said the shooting was justified as self-defense since Taylor’s boyfriend, Kenneth Walker, fired first at the officers. Walker has said he believed the officers who entered the home with a “no-knock” warrant were criminal intruders, and an attempted murder charge against him was dropped in May.

Critics of Cameron, including civil rights attorney Ben Crump, who represents the Taylor family, have been questioning the presentation to the grand jury, suggesting that Cameron, a Black Republican, was protecting the officers. Crump helped the family win a $12 million wrongful death settlement against the city of Louisville.

Cameron previously said he presented the grand jury with “all the evidence” and walked the panel through six possible homicide offenses under Kentucky law.

But prosecutors have wide leeway in how to present evidence to a grand jury, which then decides whether to bring charges. Nine of the 12 grand jurors must agree on a charge in order to return an indictment.

Cameron told WDRB, a Fox-affiliated channel in Louisville, he only recommended the one charge that was brought.

“Ultimately our judgment is that the charge that we could prove at trial beyond a reasonable doubt was for wanton endangerment against Mr. Hankison,” Cameron said.

The case has put the spotlight on Cameron, a potential rising star in a Republican Party that greatly lags Democrats with the Black vote.

Hollywood celebrities and professional athletes have called for the prosecution of the officers and celebrated Taylor, an emergency medical technician, under the slogan “Say her name!”

Cameron told WDRB he felt free to speak more openly now that a recording of grand jury proceedings would be made public. Cameron previously resisted releasing the grand jury evidence, saying it should remain secret as is normal practice.

Jefferson County Circuit Court Judge Ann Bailey Smith had ordered that a recording of the 2-1/2 days of proceedings be filed with the court on Wednesday as part of Hankison’s case.

But Cameron asked the judge for another week, saying the state needed time to redact the names of witnesses and private citizens identified in the recordings. Instead, the judge extended the deadline two days until midday Friday, according to Hankison’s defense lawyer, Stew Mathews, and a statement from the attorney general’s office.

Grand jury evidence is rarely made public, and Kentucky usually only shares it with the lawyers in a criminal case when the defendant has the right to see it. “In Kentucky it is made available to the defendant. In the interest of transparency, the judge has decided that it should be made public,” Mathews said.