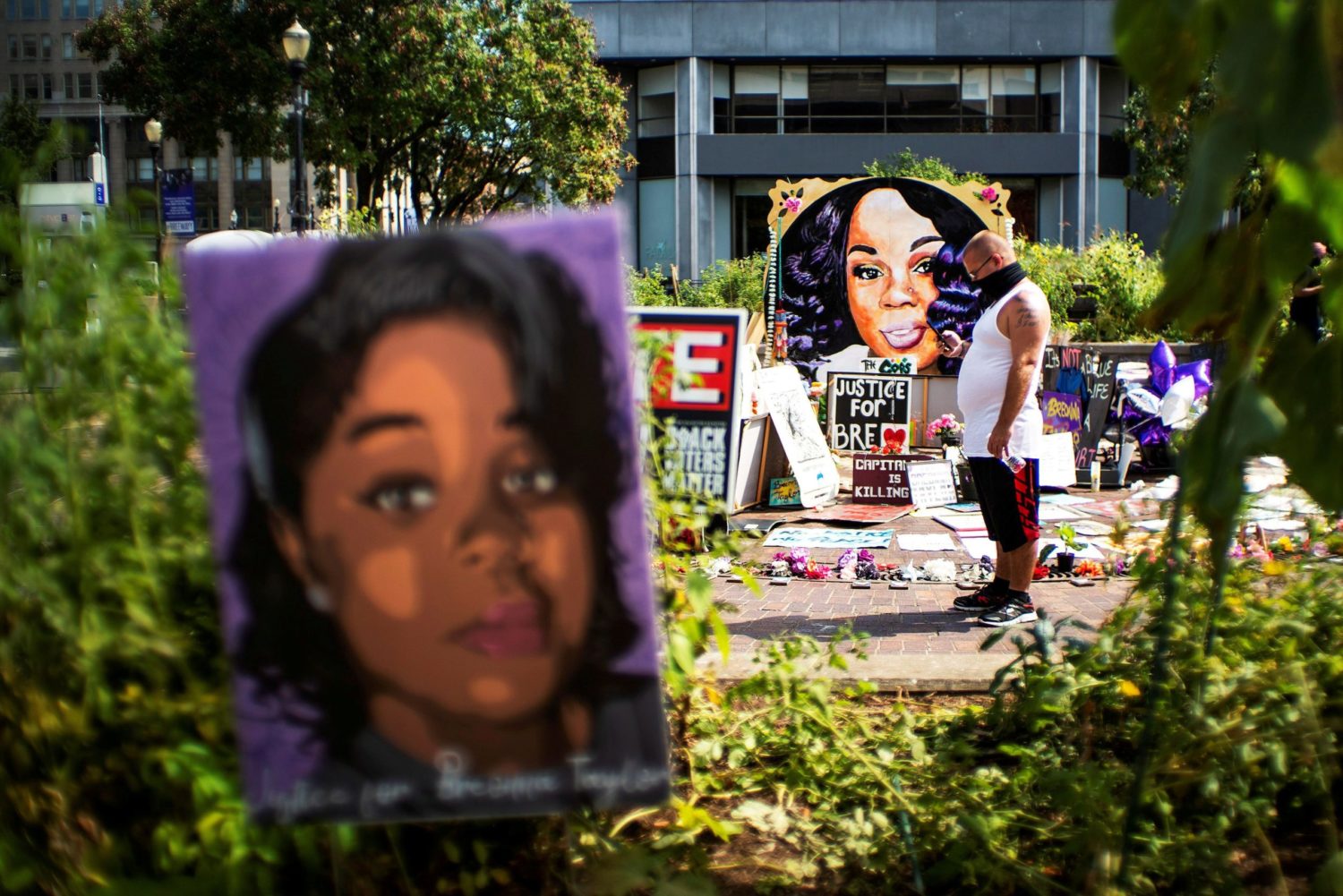 (Reuters) – Kentucky’s attorney general, who presented evidence to a grand jury in the police shooting death of Breonna Taylor, did not recommend any charges against the two police officers who shot her, saying the grand jury needed to make that decision on its own.

The revelation, in a Louisville television interview, pre-empted one of the main points of interest that was set to be unveiled on Wednesday when a recording of the 20-plus hours of proceedings was due to be made public.

However, a judge agreed to delay the release of the recording, giving the state until midday Friday to redact witnesses’ names, the attorney general’s office said on Wednesday afternoon.

Under public pressure to show the evidence he presented in a case that has captured national attention and prompted protests, Attorney General Daniel Cameron told WDRB television in an interview on Tuesday that he recommended only one charge against the three officers who opened fired. The grand jury took his guidance and indicted one officer for endangerment last week.

“They (the grand jury) are an independent body. If they wanted to make an assessment about different charges, they could have done that. But our recommendation was that (Jonathan) Mattingly and (Myles) Cosgrove were justified in their acts and their conduct,” Cameron said.

The case of Breonna Taylor, a 26-year-old Black woman, has revived street protests across the United States against racism and police brutality, further polarizing the country as some voters are already casting early ballots in the Nov. 3 presidential election.

The shooting took place while police were executing a search warrant in a drug investigation involving Taylor’s ex-boyfriend. When the officers burst into her home in the early morning hours of March 13, Taylor’s current boyfriend fired once, wounding one officer. Three officers responded with 32 rounds, six of which hit Taylor.

The grand jury decided against indicting either Mattingly or Cosgrove, who were placed on administrative leave. Instead it indicted a third white officer, Brett Hankison, for wanton endangerment for stray bullets that hit a neighboring apartment. Hankison was fired in June.

Cameron has said the shooting was justified as self-defense since Taylor’s boyfriend, Kenneth Walker, fired first at the officers. Walker has said he believed the officers who entered the home with a “no-knock” warrant were criminal intruders, and an attempted murder charge against him was dropped in May.

Critics of Cameron, including civil rights attorney Ben Crump, who represents the Taylor family, have been questioning the presentation to the grand jury, suggesting that Cameron, a Black Republican, was protecting the officers. Crump helped the family win a $12 million wrongful death settlement against the city of Louisville.

Cameron previously said he presented the grand jury with “all the evidence” and walked the panel through six possible homicide offenses under Kentucky law.

But prosecutors have wide leeway in how to present evidence to a grand jury, which then decides whether to bring charges. Nine of the 12 grand jurors must agree on a charge in order to return an indictment.

Cameron told WDRB, a Fox-affiliated channel in Louisville, he only recommended the one charge that was brought.

“Ultimately our judgment is that the charge that we could prove at trial beyond a reasonable doubt was for wanton endangerment against Mr. Hankison,” Cameron said.

The case has put the spotlight on Cameron, a potential rising star in a Republican Party that greatly lags Democrats with the Black vote.

Hollywood celebrities and professional athletes have called for the prosecution of the officers and celebrated Taylor, an emergency medical technician, under the slogan “Say her name!”

Cameron told WDRB he felt free to speak more openly now that a recording of grand jury proceedings would be made public. Cameron previously resisted releasing the grand jury evidence, saying it should remain secret as is normal practice.

Jefferson County Circuit Court Judge Ann Bailey Smith had ordered that a recording of the 2-1/2 days of proceedings be filed with the court on Wednesday as part of Hankison’s case.

But Cameron asked the judge for another week, saying the state needed time to redact the names of witnesses and private citizens identified in the recordings. Instead, the judge extended the deadline two days until midday Friday, according to Hankison’s defense lawyer, Stew Mathews, and a statement from the attorney general’s office.

Grand jury evidence is rarely made public, and Kentucky usually only shares it with the lawyers in a criminal case when the defendant has the right to see it. “In Kentucky it is made available to the defendant. In the interest of transparency, the judge has decided that it should be made public,” Mathews said. 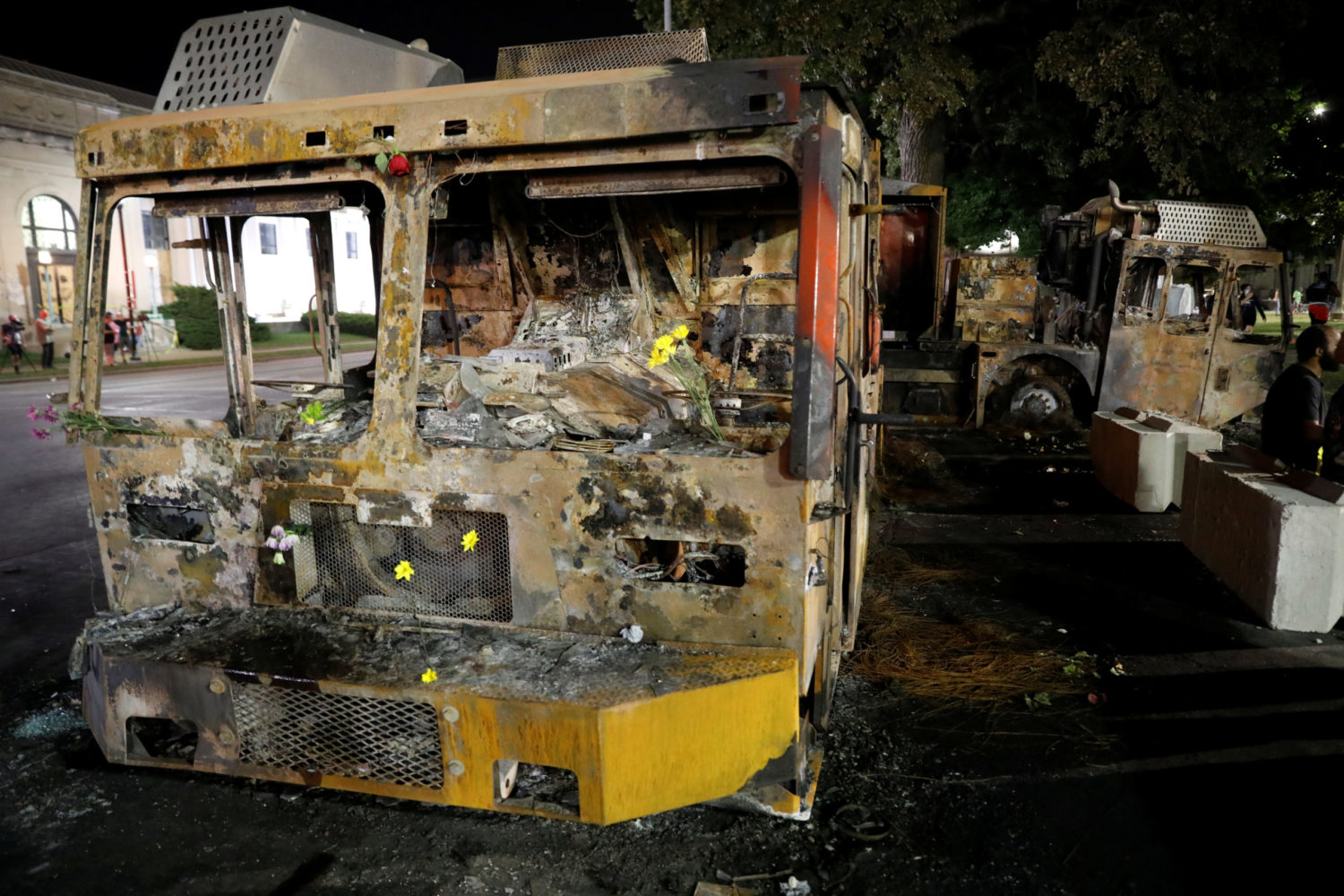 By Brendan McDermid and Stephen Maturen

KENOSHA, Wis. (Reuters) – Relative calm returned to Kenosha, Wisconsin, overnight after the previous night’s deadly gun violence, and investigators revealed new details about the police shooting that paralyzed a Black man and revived a wave of protests over racial injustice.

Wisconsin Attorney General Josh Kaul on Wednesday identified Rusten Sheskey as the white police officer who fired seven shots at the back of Jacob Blake after Blake opened his car door on Sunday. Kaul also said investigators found a knife on the floor of Blake’s car.

That announcement, combined with the arrest of a 17-year-old suspect charged with homicide over the previous night’s gunfire, set the stage for what could have been another night of chaos on the streets of Kenosha, about 40 miles (60 km) south of Milwaukee.

Shockwaves from the events in the city of about 100,000 were felt throughout the United States as professional athletes went on strike and anti-racism street protests intensified in other cities. At the Republican National Convention, Vice President Mike Pence and other speakers demanded “law and order.”

But in Kenosha, after three nights of civil strife – including arson, vandalism and the shootings that killed two people on Tuesday night – calm appeared to take hold on Wednesday night and Thursday morning.

About 200 protesters defied a curfew and marched peacefully through city streets, chanting, “Black lives matter” and “no justice, no peace” in response to the shooting of Blake, 29, in the presence of three of his young sons.

Prior nights had seen an array of rifle-toting civilians among them 17-year-old Kyle Rittenhouse, who was arrested on Wednesday on homicide charges in connection with Tuesday night’s shootings. Rittenhouse, a police supporter, was arrested at his home in Antioch, Illinois, about 20 miles (30 km) away.

National Basketball Association players led by the Milwaukee Bucks went on strike to protest racial injustice during the playoffs, putting the rest of the season in jeopardy.

Players in Major League Baseball, Major League Soccer and the Women’s National Basketball followed with their own wildcat strikes, and tennis player Naomi Osaka pulled out of a tournament in Ohio.

The Kenosha turmoil struck while much of the United States remained agitated over George Floyd, who died on May 25 after a Minneapolis policeman knelt on his neck.

In Minneapolis, authorities declared a state of emergency on Wednesday to quell unrest sparked by the death of a Black homicide suspect who police say shot himself.

Police in Oakland, California, said hundreds of people took part in demonstrations that resulted in fires, broken windows and vandalized businesses. And police and protesters continued to clash in Portland, Oregon, where demonstrations have gone on for nearly three months straight.

In the police shooting that sparked the latest wave of outrage, Sheskey, a seven-year veteran of the Kenosha police force, fired seven times at Blake’s back, hitting him four times.

Blake survived despite wounds to his spine and multiple organs, and he may be permanently paralyzed, his family’s lawyers said.

Civil rights attorney Ben Crump, one of the lawyers representing Blake’s family, disputed the report that Blake had a knife.

“Jacob Blake didn’t harm anyone or pose any threat to the police, yet they shot him seven times in the back in front of his children,” Crump said.

“But when a young white supremacist shot and killed two peaceful protesters, local law enforcement and National Guardsmen allowed him to walk down the street with his assault weapon,” Crump and his co-counsels said in a statement, without offering proof that Rittenhouse was a racist.

They were referring to video from the previous night that showed the person who had just fired on protesters was able to walk past a battery of police without being arrested.

Authorities later caught up with Rittenhouse, whose since-deleted Facebook page shows him posing with another young man, both of them holding rifles. The photo is encircled by a Blue Lives Matter badge in support of police.