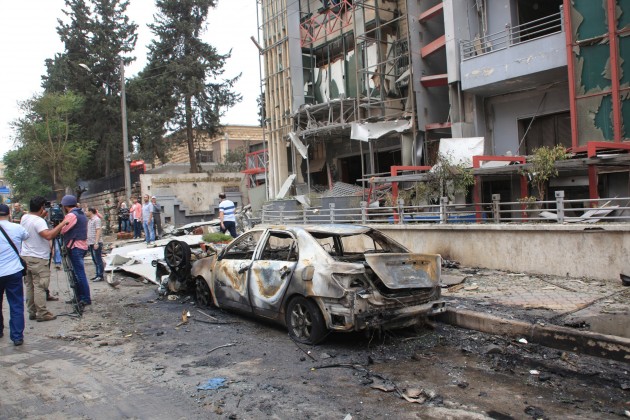 Journalists and civilians stand near the damage after rockets fired by insurgents hit the al-Dabit maternity clinic in government-held parts of Aleppo city, Syria, in this handout picture provided by SANA on May 3, 2016. SANA/Handout via REUTERS

WASHINGTON (Reuters) – U.S. Secretary of State John Kerry warned President Bashar al-Assad on Tuesday of “repercussions” if he does not stick to a ceasefire brokered by Russia and the United States and move forward with a political transition aimed at ending Syria’s war.

But Kerry said he still hoped diplomatic efforts could restore a nationwide Feb. 27 ceasefire to include Aleppo, which has felt the brunt of increased fighting in recent weeks.

“If Assad does not adhere to this, there will clearly be repercussions, and one of them may be the total destruction of the ceasefire and then go back to war,” Kerry told reporters a day after emergency meetings in Geneva.

“I don’t think Russia wants that. I don’t think Assad is going to benefit from that. There may be even other repercussions being discussed,” he added.

It was unclear what Kerry meant by repercussions. Obama administration officials previously warned of consequences for Assad’s action in the country’s long-running civil war, but critics say Washington has failed to follow through with a more aggressive response.

Obama warned earlier in the conflict against the use of chemical weapons by Assad’s forces, setting a red line that would trigger U.S. military action. But he backed away from a threatened bombing campaign.

Kerry said that without a ceasefire in Aleppo, Syria’s largest city before the civil war erupted in 2011, the violence there was in danger of spiraling out of control. The plan now being worked on to ensure a more lasting ceasefire would try to separate rival forces from militias, which are not covered by the ceasefire.

“The line they are trying to draw now would prohibit any kind of incursion of Aleppo, it will not allow Aleppo to fall,” Kerry said. He added that the truce was holding in areas of Damascus and Latakia region where he said there had been a “meaningful” drop in violence.

Kerry said the United States was trying to determine which opposition group was responsible for a rocket attack on a hospital in Aleppo on Tuesday, saying there was no justification for such “horrific violence.”

He repeated the United States would never accept a transition that included Assad.

“If Assad’s strategy is to somehow think he’s going to just carve out Aleppo and carve out a section of the country, I got news for you and for him – this war doesn’t end,” Kerry said.

“It is physically impossible for Assad to just carve out an area and pretend he is somehow going to make it safe while the underlying issues are unresolved in this war.”