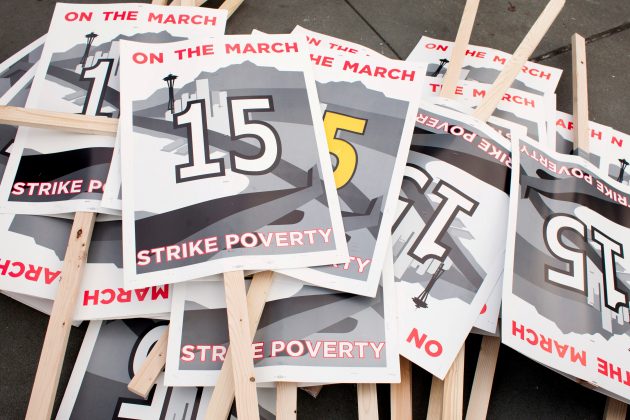 FILE PHOTO: Protest signs are pictured in SeaTac, Washington just before a march from SeaTac to Seattle aimed at the fast food industry and raising the federal minimum wage and Seattle's minimum wage to $15 an hour December 5, 2013. REUTERS/David Ryder/File Photo

CHICAGO (Reuters) – U.S. activists plan protests in up to 400 cities across the United States on Monday’s Labor Day holiday to demand a minimum wage of $15 an hour, and are targeting politicians in Midwestern battleground states who have blocked such salary increases.

The demonstrations, backed by the Service Employees International Union, will focus on hospital and home care workers, joining the fast-food and janitorial staffers who have protested since the “Fight for $15” movement started in 2012.

The movement has helped to spur politicians in a growing number of cities such as New York, Seattle, Minneapolis and Washington, D.C., to adopt measures that over time raise minimum wages to $15 an hour.

Organizers are also increasing pressure on legislatures and governors, particularly in the Midwest, that have blocked or rolled back increases.

The increased focus on politicians who oppose wage increases may capture some of the populist job-related voter discontent in traditionally Democratic Midwest states that helped U.S. President Donald Trump win the White House, said Dick Simpson, a political science professor at the University of Illinois at Chicago.

“The minimum wage issue is one (issue) they can immediately identify with because it affects their pocketbook with every paycheck,” he said.

Republican Governor Scott Walker of the presidential swing state of Wisconsin is among those targeted, as is Illinois Republican Governor Bruce Rauner, who last month vetoed raising the minimum wage to $15 by 2022, saying it would hurt employment and businesses.

“I’m doing 40 hours of campaigning and knocking on doors and making phone calls, whatever it takes to get Walker out of office,” Milwaukee hospital worker Margie Breelove said.

A voter-engagement drive, also slated to begin on Monday, seeks thousands of workers to pledge to volunteer 40 hours leading up to the 2018 elections.

The idea is to support candidates, most of them Democrats, for state legislatures or governor who favor wage hikes and union rights in such states as Iowa, Michigan, Ohio, Wisconsin and Illinois, along with other areas outside the Midwest.

“It’s not just about taking out people that have been rigging the rules against us, it’s backing candidates who are prepared to support our agenda,” SEIU President Mary Kay Henry said in a telephone interview.

Representatives for the governors of Wisconsin, Missouri and Illinois did not respond to requests for comment on Friday.

But supporters of an increase say the current level is not enough to live on and helps fuel the need for social safety-net programs. They point to studies showing little impact on jobs.

Under a law approved last year, California set a $15 target for all workers, which it plans to reach in 2023. New York state is also gradually increasing its minimum wage to $15 an hour for all workers. Cities, including Minneapolis, have also approved such legislation.

However, since 2016, eight states, including Alabama, Kentucky and Iowa, have passed laws pre-empting local wage laws, according to the Economic Policy Institute.

St. Louis’ minimum wage, which had increased to $10 an hour, recently reverted to $7.70 after the legislature prohibited cities from creating separate wage laws. Missouri Governor Eric Greitens had opposed the increase.