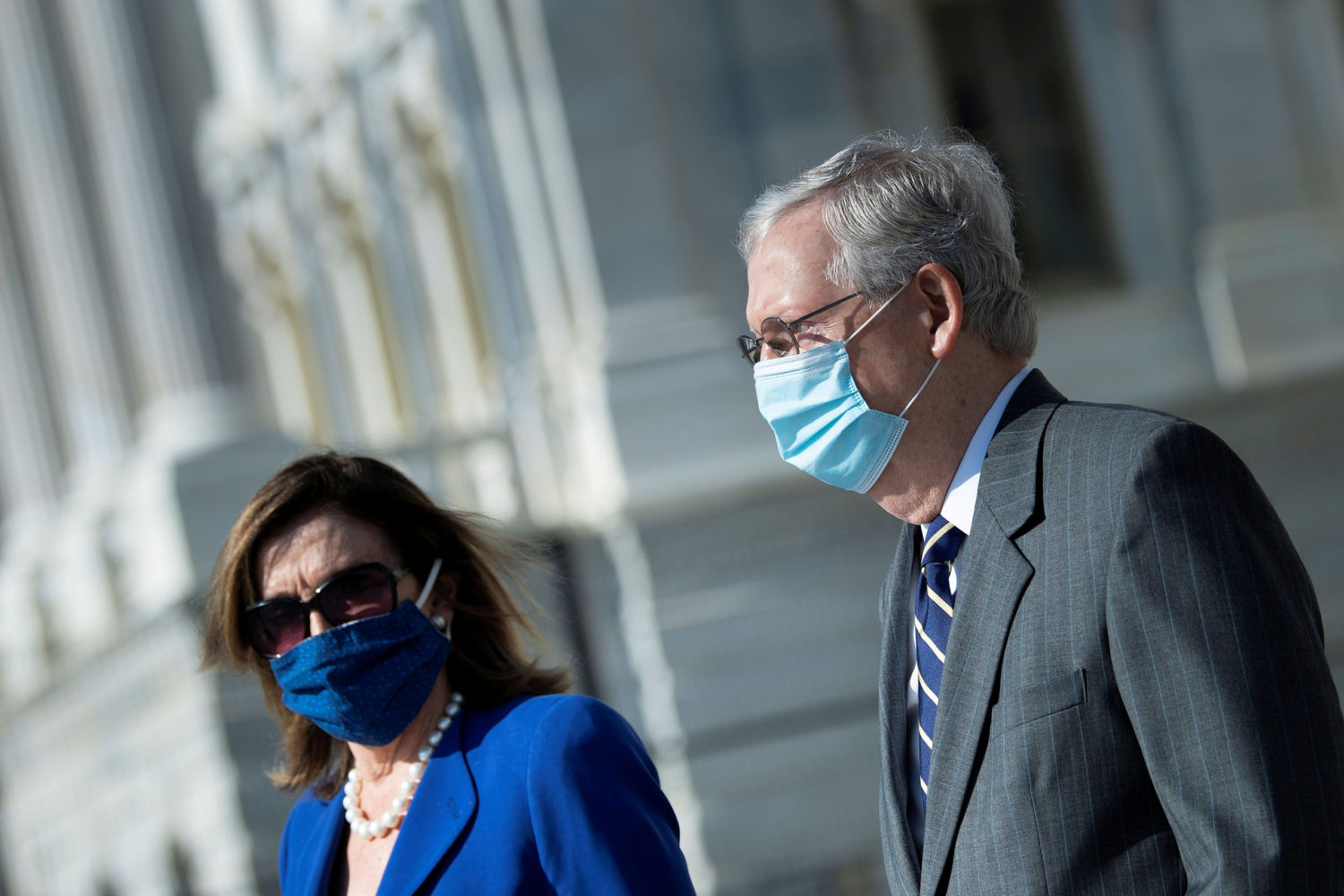 WASHINGTON (Reuters) – The White House on Wednesday pushed for Congress to take up a narrow coronavirus economic relief bill that Democrats have long rejected, while a leading Senate Democrat said real action may come soon after the Sept. 7 U.S. Labor Day holiday.

With the breakdown of talks between the White House and top congressional Democrats now in its 12th day, Senate Republicans are floating a “skinny” version of the $1 trillion bill proposed by Senate Majority Leader Mitch McConnell for a possible vote in the Republican-led chamber.

That bill ran into immediate opposition from both Democrats and McConnell’s own Republicans when he unveiled it late last month.

White House Chief of Staff Mark Meadows called on Democrats to use Saturday’s vote on U.S. Postal Service legislation in the House of Representatives as a vehicle for coronavirus relief including stimulus checks for individuals and funding for personal protective equipment and schools.

“I think the outlook for a skinny deal is better than it’s ever been and yet we are still not there,” Meadows told reporters. “If Speaker (Nancy) Pelosi moves forward a single bill on postal … let’s add in the things we can agree upon.”

But leading Democrats have flatly rejected White House and Republican calls for narrow legislation, saying Americans need broad legislation and accusing Republicans of failing to grasp the severity of the crisis.

“Saturday focus is postal,” a senior Democratic aide said, adding that there’s “still more consensus building in (the) caucus to be done.”

Democratic Senator Tim Kaine said that he does not expect the White House to get serious about negotiations until after next week’s Republican presidential election convention, where he expects Republicans to tout President Donald Trump’s executive orders on coronavirus relief.

“Once we get out of the Republican convention, the week before Labor Day, you’re going to see serious negotiations restart. And that means we could do something possibly right after Labor Day, when we return,” Kaine said in an online interview with Politico.

The Senate is due to return from recess on Sept. 8 and the House on Sept. 14. 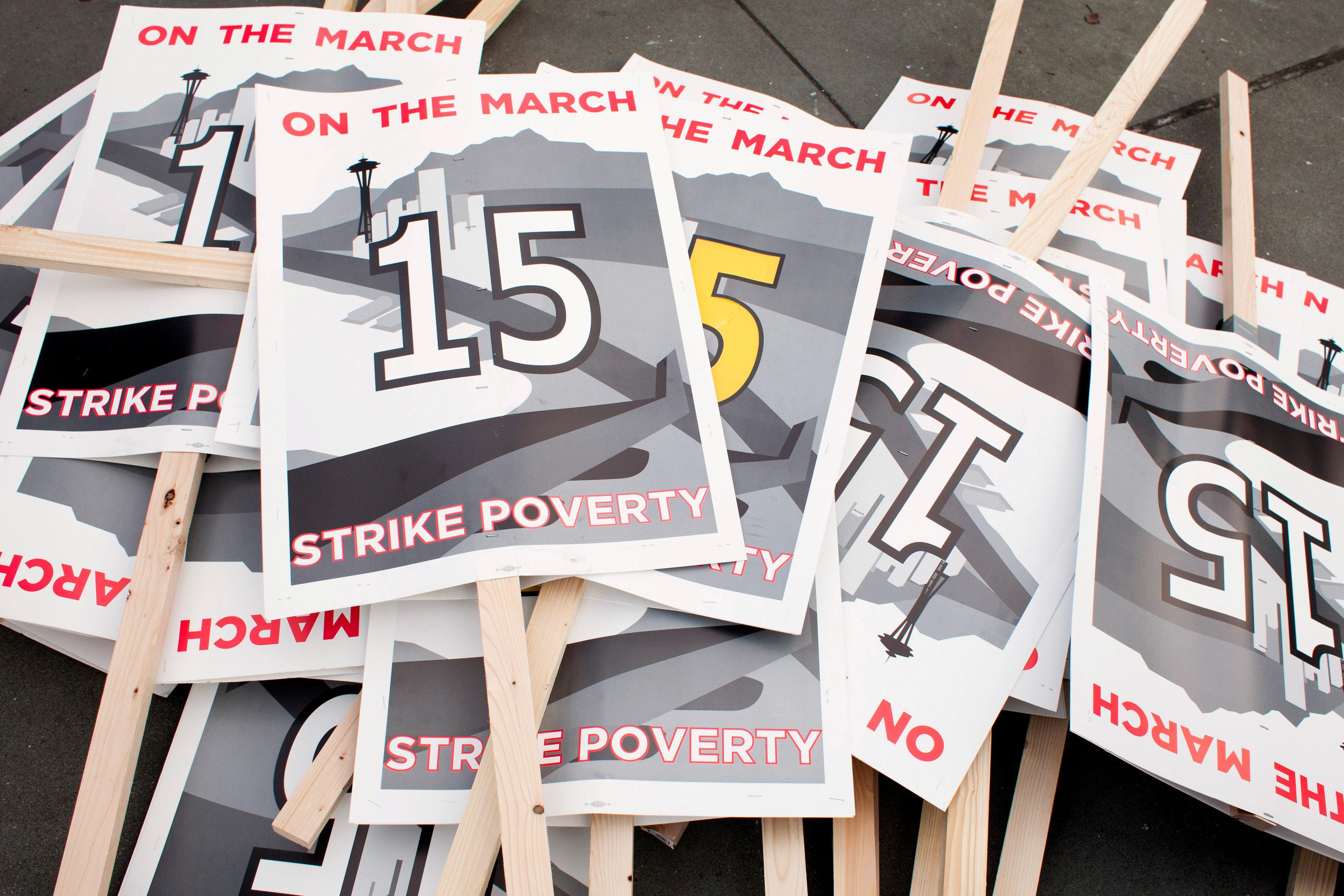 CHICAGO (Reuters) – U.S. activists plan protests in up to 400 cities across the United States on Monday’s Labor Day holiday to demand a minimum wage of $15 an hour, and are targeting politicians in Midwestern battleground states who have blocked such salary increases.

The demonstrations, backed by the Service Employees International Union, will focus on hospital and home care workers, joining the fast-food and janitorial staffers who have protested since the “Fight for $15” movement started in 2012.

The movement has helped to spur politicians in a growing number of cities such as New York, Seattle, Minneapolis and Washington, D.C., to adopt measures that over time raise minimum wages to $15 an hour.

Organizers are also increasing pressure on legislatures and governors, particularly in the Midwest, that have blocked or rolled back increases.

The increased focus on politicians who oppose wage increases may capture some of the populist job-related voter discontent in traditionally Democratic Midwest states that helped U.S. President Donald Trump win the White House, said Dick Simpson, a political science professor at the University of Illinois at Chicago.

“The minimum wage issue is one (issue) they can immediately identify with because it affects their pocketbook with every paycheck,” he said.

Republican Governor Scott Walker of the presidential swing state of Wisconsin is among those targeted, as is Illinois Republican Governor Bruce Rauner, who last month vetoed raising the minimum wage to $15 by 2022, saying it would hurt employment and businesses.

“I’m doing 40 hours of campaigning and knocking on doors and making phone calls, whatever it takes to get Walker out of office,” Milwaukee hospital worker Margie Breelove said.

A voter-engagement drive, also slated to begin on Monday, seeks thousands of workers to pledge to volunteer 40 hours leading up to the 2018 elections.

The idea is to support candidates, most of them Democrats, for state legislatures or governor who favor wage hikes and union rights in such states as Iowa, Michigan, Ohio, Wisconsin and Illinois, along with other areas outside the Midwest.

“It’s not just about taking out people that have been rigging the rules against us, it’s backing candidates who are prepared to support our agenda,” SEIU President Mary Kay Henry said in a telephone interview.

Representatives for the governors of Wisconsin, Missouri and Illinois did not respond to requests for comment on Friday.

But supporters of an increase say the current level is not enough to live on and helps fuel the need for social safety-net programs. They point to studies showing little impact on jobs.

Under a law approved last year, California set a $15 target for all workers, which it plans to reach in 2023. New York state is also gradually increasing its minimum wage to $15 an hour for all workers. Cities, including Minneapolis, have also approved such legislation.

However, since 2016, eight states, including Alabama, Kentucky and Iowa, have passed laws pre-empting local wage laws, according to the Economic Policy Institute.

St. Louis’ minimum wage, which had increased to $10 an hour, recently reverted to $7.70 after the legislature prohibited cities from creating separate wage laws. Missouri Governor Eric Greitens had opposed the increase. 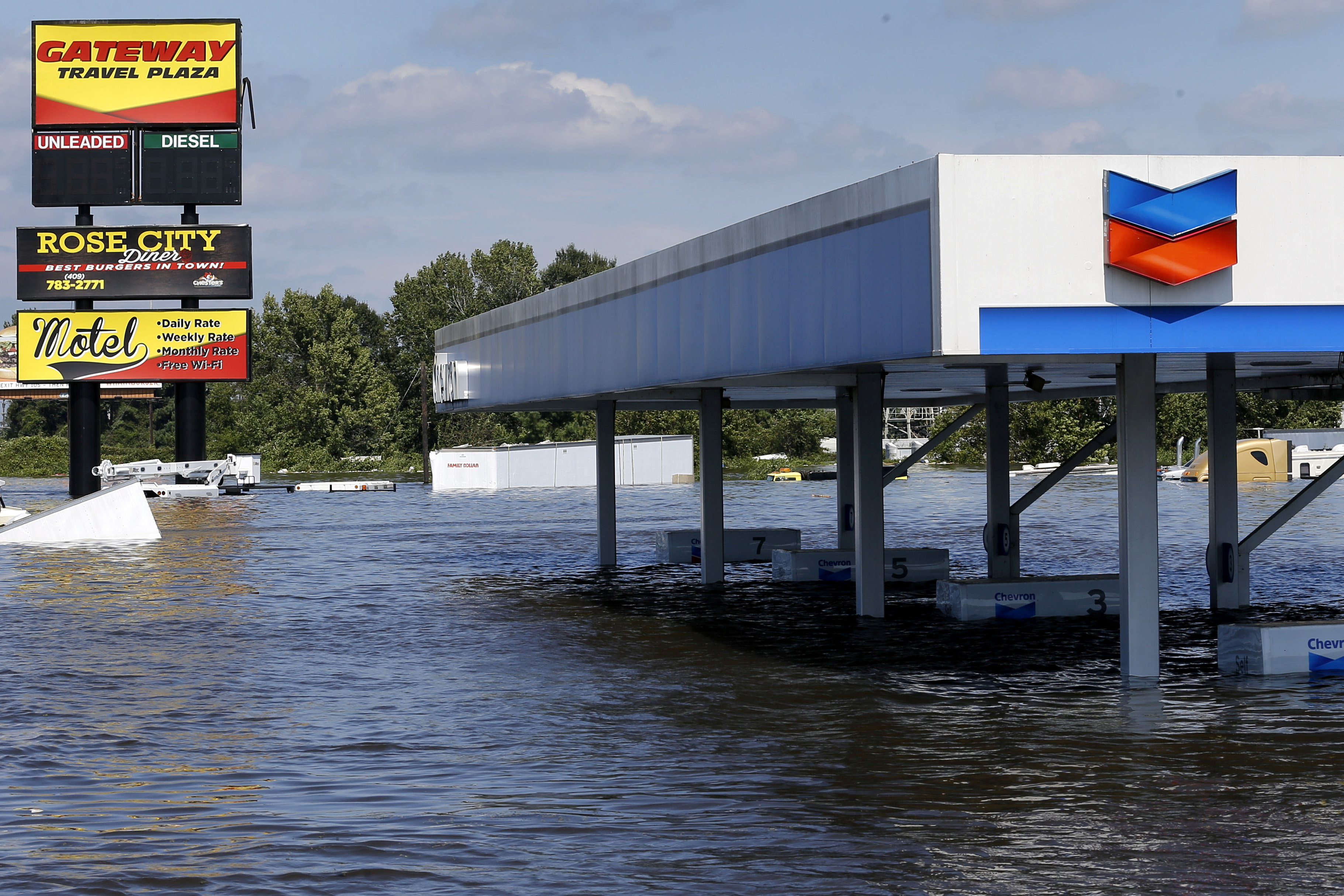 Major fuel pipelines feeding the U.S. Northeast and Midwest were either closed or severely curtailed, prompting shortages in some areas and dramatic spikes in wholesale prices.

The storm, which began as a hurricane a week ago, has roiled global fuel markets, and tankers carrying millions of barrels of fuel have been rerouted to the Americas to avert shortages. European refining margins hit a two-year high amid the surge in exports.

Indeed, the effects of the storm will continue for several weeks, if not months, after Harvey hammered the Gulf Coast for days and brought floods that buried Houston and the surrounding area in several feet of water. It knocked out about 4.4 million barrels of daily refining capacity, slightly more than Japan uses daily, and the signs of restarts were tentative.

The nation’s largest refiner, Motiva’s Port Arthur facility, which can handle 600,000 barrels of crude daily, will be shut for at least two weeks, according to sources familiar with plant operations.

Other plants in the Beaumont/Port Arthur area are expected to face similar challenges restarting as waters continued to rise, even as flooding receded in Houston, some 85 miles (137 km) west.

In Corpus Christi, where Harvey first made landfall, refiners Citgo Petroleum Corp, Flint Hills Resources and Valero Energy Corp were moving to restart their plants, along with the nearby Valero Three Rivers refinery, according to sources.

Benchmark U.S. gasoline prices  have surged more than 15 percent since the storm began, but in trading Friday, the contract for October delivery lost 1 percent, the first decline in five days. September’s contract had risen by 25 percent, but stopped trading Thursday.

U.S. crude prices continued to slump along with demand, with the futures contract falling 0.4 percent to $47.02 a barrel.

The national average for a regular gallon of gasoline rose to $2.519 as of Friday morning, according to motorists advocacy group AAA, with even gaudier increases in the U.S. Southeast, which relies heavily on Gulf supplies. South Carolina, for instance, has seen prices rise nearly 30 cents, and prices were up nearly 20 cents in Texas, where fuel shortages were already evident.

Suppliers in the Chicago area were taking steps to prevent shortages, and banking on hope.

Dave Luchtman, owner and president of Lucky’s Energy Service Inc., a small distributor in Chicago, has rented two storage trailers that hold 8,000 gallons each, expected to be delivered Friday.

“So I have a little lifeline,” Luchtman said.

Refineries so far have not given any indication that there are fuel shortages, said Mario Orlandi, an operations manager at Olson Service Co, which supplies diesel and gasoline to the Chicago area.

The global impact of the storm was being felt in Venezuela, where financially strapped state-run PDVSA is facing the possibility that scheduled deliveries – tankers floating offshore for weeks due to non-payment – will make their way to other Latin American destinations.

At least two cargoes scheduled to deliver to Venezuela currently in the port of Curacao are now expected to be delivered to Ecuador.

Mexico, Brazil, Colombia and other countries want to tap some of the 7 million barrels of fuel sitting in the Caribbean sea, according to three traders and shippers.

European and Asian traders have diverted millions of barrels of fuel to the Americas. That included a rare opportunity for exports of jet fuel from Europe to the United States, reversing the usual flow of shipments.

Supplies from distant markets may not arrive soon enough to avert a crunch after the Colonial Pipeline, the biggest U.S. fuel system, said it would shut part of its main lines to the Northeast.

“We are going to have outages from Texas to Boston,” said one East Coast market source. The market is “way under-appreciating the magnitude of this.”

Several East Coast refineries have run out of gasoline for immediate delivery as they sent fuel elsewhere, and concerns over shortages ahead of the U.S. Labor Day extended weekend were mounting.

A Catholic pro-life organization is actively campaigning for PBS to drop their plans to air the pro-abortion movie “After Tiller.”

The American Life League called upon PBS to pull the movie which is scheduled to air on Labor Day.  The group says that because PBS is “publicly funded” is “has no business” airing a slanted, pro-abortion film.

“Why are pro-life tax dollars being used to paint a sympathetic picture of abortionists who stab babies in the base of their skulls just moments before they are born?” said ALL President Judie Brown.  “Where is the sympathy for the babies, whose brains are being sucked out by vacuum machines by these abortionists?”

PBS says they will air the movie as part of their “Point of View” series that has been running for 27 seasons.

“‘After Tiller’ follows these four doctors as they confront a host of obstacles — from moral and personal dilemmas to restrictions placed on their practices by state legislation,” stated PBS in a press release.  “Rather than trying to take a comprehensive look at the heated political debate surrounding abortion, the film weaves together revealing, in-depth interviews with the abortionists and intimate vérité scenes both from their lives outside their clinics and the time they spend in their clinics, counseling and caring for their anxious, vulnerable patients at profoundly important crossroads in their lives.”

Pro-life groups around the world have shown the “After Tiller” film to be slanted in favor of abortion.