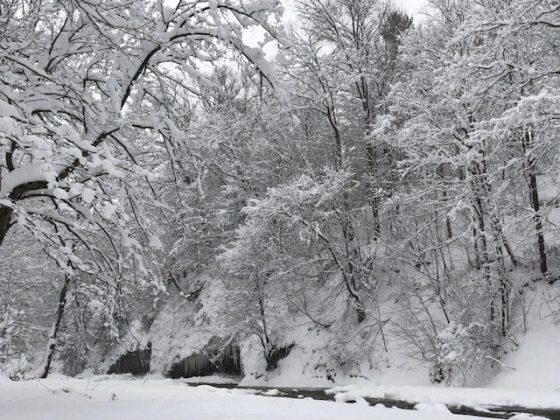 Trees are seen after the record snowfall in Erie, Pennsylvania, U.S., December 26, 2017 in this picture obtained from social media. Picture taken December 26, 2017. Courtesy of Instagram @THEWORLDAROUNDNIKKI /via REUTERS

NEW YORK (Reuters) – Most of the U.S. Northeast and Midwest grappled with a post-Christmas deep freeze on Thursday, with temperatures expected to plunge as low as minus 20 degrees F (minus 29 C) in North Dakota as forecasters warned that the harsh winter weather could usher in the New Year.

Tioga, about 200 miles (322 km) north of Bismarck, took honors as the coldest spot in the continental United States, according to National Weather Service (NWS) spokesman Bob Oravec. The mercury dived to minus 15 F early on Thursday afternoon.

“By tomorrow morning, low temperatures will probably be 15 to 20 degrees below zero in the northern and northwestern areas of North Dakota, maybe even in north Minnesota,” Oravec said.

On Wednesday, International Falls, Minnesota, about 300 miles north of Minneapolis, lived up to its reputation as the “Icebox of the Nation.” The low temperature there dropped to 37 degrees F below zero, breaking the old record for the day of 32 degrees below, set in 1924. Temperatures moderated to minus 2 F on Thursday.

Mayor Bob Anderson told Reuters that a local paper mill had to reduce operations because of the cold. But he said mail was still being delivered, and the town’s roughly 6,000 weather-hardened residents were taking the cold in stride.

For most of the region encompassing New England, northern Pennsylvania and New York, the NWS issued wind chill advisories or warnings. Temperatures in the region ranged from highs in the teens and 20s F to lows in the single digits or below zero.

For upstate New York, east of Lake Ontario, the NWS warned of “dangerously” cold wind chills of minus 5 F to minus 30 F through Friday. In northern Vermont, conditions are even more brutal, with wind chills threatening to bottom out at minus 40 F.

On Twitter, the hashtag #ItsSoCold was the No. 1 trending topic in the United States on Thursday as social media users expressed their frustration with Old Man Winter.

“When your landlord doesn’t have the heat on during the workweek so the cat sitting in your lap isn’t just cute, but also practical. #ItsSoCold,” wrote user Walton Clark on Twitter.

Erie, a city of about 100,000 on the shores of Lake Erie in northwest Pennsylvania, was expecting a fresh round of winter storms that could bring as much as an additional 10 inches (25 cm) of “lake effect” snow, forecasters said. The area is already buried under more than 65 inches from a record-breaking storm earlier this week.

The accumulations, heavy even by the standards of the Great Lakes’ eastern shores, resulted from a wave of Arctic air moving across the relatively mild waters of the lake, forecasters said.

Light and heavy snow was also expected to fall this weekend in many other parts of the United States, from Montana to Maine, forecasters said.