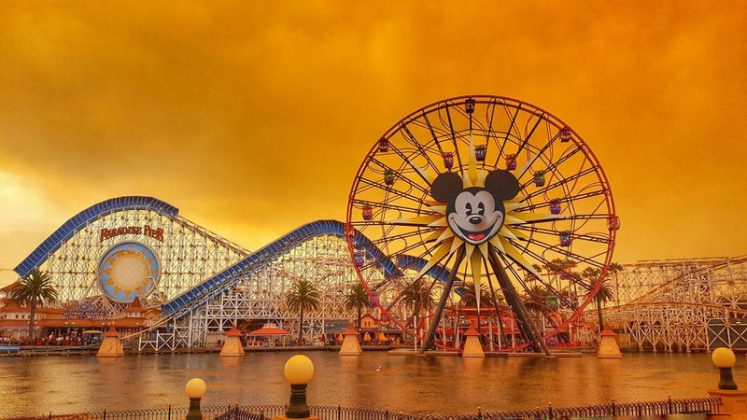 Disneyland is seen as wildfires rage across California, in Anaheim, California, U.S. October 9, 2017 in this picture obtained from social media. INSTAGRAM /@KENNYA.BOULTER/Kennya Boulter via REUTERS

SONOMA, Calif. (Reuters) – Firefighters struggled overnight to halt the spread of wildfires known to have killed 23 people in North California, preparing for winds to shift after one town threatened by flames evacuated all residents.

The edge of the deadly Tubbs fire was less than two miles (3km) from Calistoga, a Napa Valley community whose 5,000 residents left their homes on Wednesday.

Whether the town burns “is going to depend on the wind,” its Fire Chief Steve Campbell told Reuters early on Thursday. “High winds are predicted, but we have not received them yet.”

Tubbs is one of nearly two dozen fires spanning eight counties that, raging largely unchecked since igniting on Sunday, have left hundreds of residents unaccounted for.

While their cause has not been conclusively determined, they are thought to have been sparked by power lines toppled by gale force winds, and fanned by hot, dry “Diablo” winds that blew into northern California toward the Pacific.

New advisory evacuations were also issued in Sonoma County late on Wednesday for parts of Santa Rosa, the largest city in the state’s world-renowned wine country, and Gesyerville, an unincorporated town of 800 people.

“The winds are predicted to be very erratic,” said country spokesman Barry Dugan. “There will be burst of high gusts that can be … very unpredictable and difficult when you are fighting a fire and also for residents who we are trying to keep posted.”

Around 25,000 people remained under evacuation on Wednesday as the fires belched smoke that drifted south over the San Francisco Bay area, where some residents donned face masks. 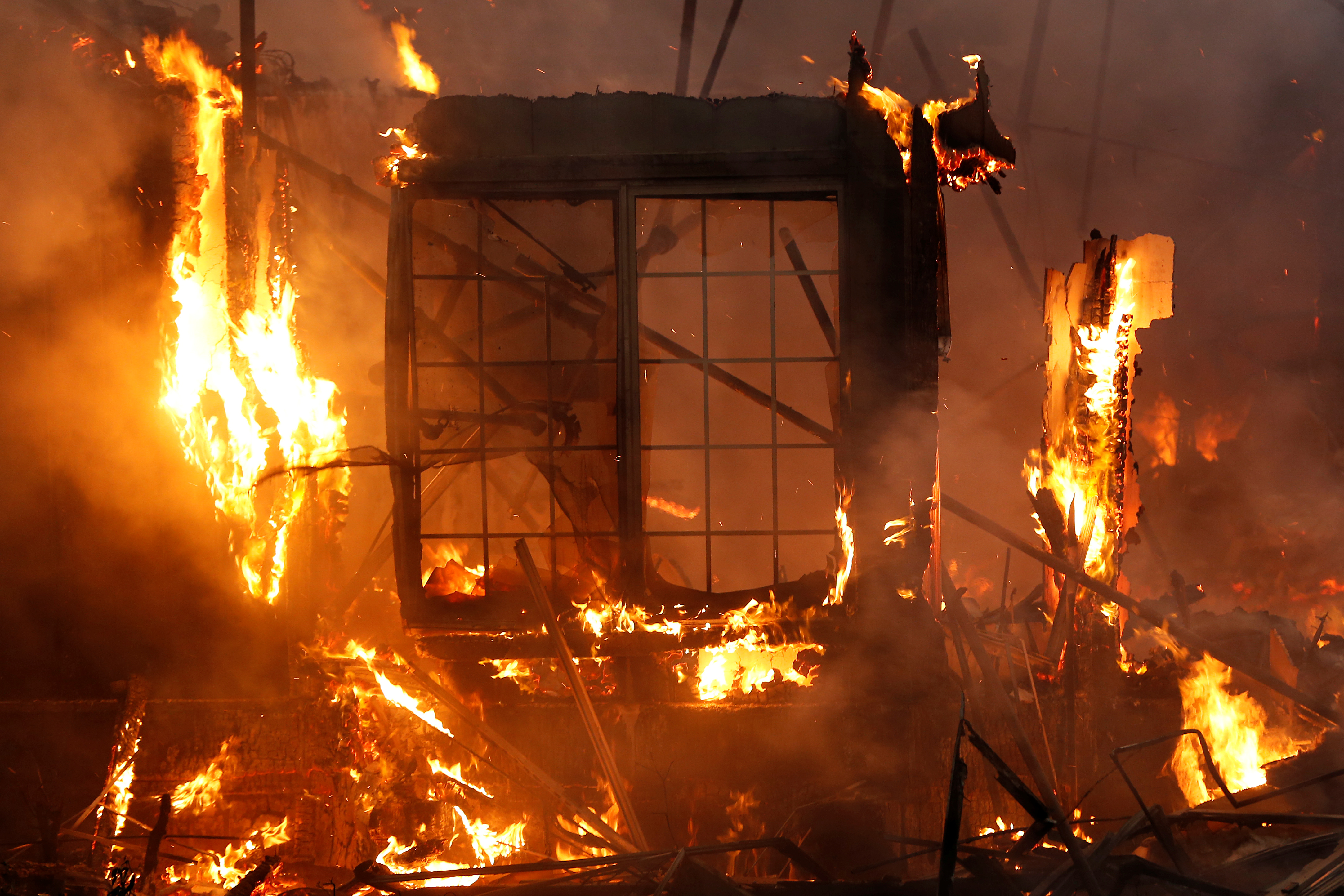 A burning structure is seen at the Hilton Sonoma Wine Country during the Tubbs Fire in Santa Rosa.
REUTERS/Stephen Lam

More than 285 people were still missing in Sonoma County late on Wednesday night, the sheriff said on Twitter. It was unclear how many might be fire victims rather than evacuees who not checked in with authorities.

In Santa Rosa, blocks in some neighborhoods resembled war zones, with little left but charred debris, broken walls, chimneys and the steel frames of burned-out cars.

The 23 recorded deaths make the fires the deadliest in the state since 1991, with Tubbs, which has accounted for 13 fatalities, the worst single blaze since 2003, according to state data.

In addition to high winds, the fires have been stoked by an abundance of thick brush left tinder dry by a summer of hot, dry weather.

Matt Nauman, spokesman for the region’s main utility, Pacific Gas & Electric, said many power lines had fallen during gales that packed gusts in excess of 75 miles (120km) per hour.

California Governor Jerry Brown declared a state of emergency in several northern counties, as well as in Orange County in Southern California, where a fire in Anaheim destroyed 15 structures and damaged 12. 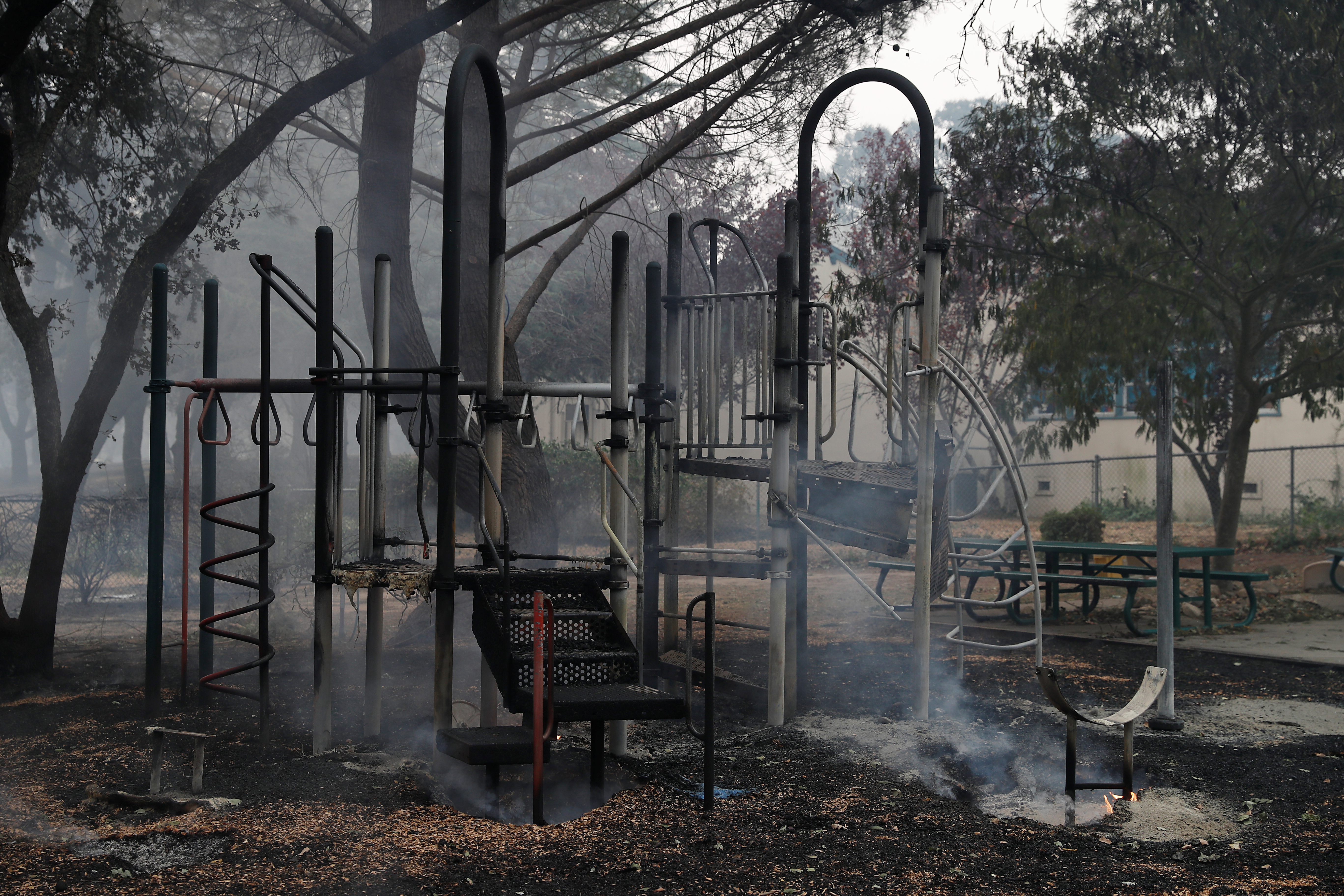 Smoke rises from a playground in front of Dunbar Elementary School during the Nuns Fire in Sonoma.
REUTERS/Stephen Lam