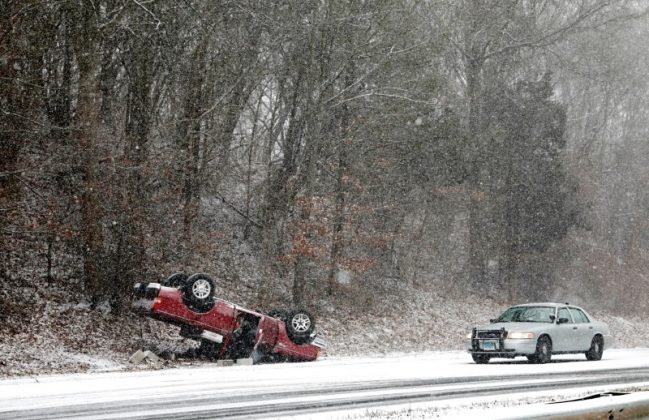 A Connecticut State Police vehicle stands by a flipped over car in falling snow after an accident on the Merritt Parkway South in Hamden, Connecticut, U.S., January 31, 2017. REUTERS/Mike Segar

BOSTON (Reuters) – An unexpected bout of icy weather on Wednesday morning caused scores of accidents around New England, with 55 vehicles colliding in a series of crashes outside Boston and a man killed in a separate incident.

Police in Needham, Massachusetts, said a vehicle struck and killed a 63-year-old man who had been trying to help another motorist stuck on the ice in the suburb about 18 miles (29 km) west of Boston.

“It appears as though the vehicle was sliding on the ice and was unable to stop before striking the victim, pinning him between the two vehicles,” the Needham Police Department said in a statement. It did not identify the victim.

North of Boston, some 55 cars were involved in a series of crashes in the suburb of Wakefield, Massachusetts, with multiple motorists injured, though none seriously, state police said.

It was the start of a forecast whipsaw of weather over 48 hours. Temperatures around Boston are expected to pass 50 degrees Fahrenheit (10°C) on Wednesday before dropping back below freezing overnight, when a snowstorm is expected to begin.

The National Weather Service was forecasting 8 to 14 inches (20-36 cm) of snow on Thursday.

Wednesday’s ice, the result of an overnight rainstorm, may have caught commuters off-guard since earlier forecasts had anticipated temperatures would rise above freezing before the snow begins, said National Weather Service meteorologist Bill Simpson.

The result was chaos on roads around Massachusetts, Connecticut and New Hampshire.

Photos from the Wakefield area showed vehicles spun at strange angles and entirely blocking the roadway, with emergency responders having trouble maintaining their footing on icy roads.

The Massachusetts State Police had not yet counted the total number of traffic collisions around the state, a dispatcher said.

Farther north, all but one lane of a major interstate highway in Maine was closed after a tractor-trailer that ran off the road and flipped on its side due to the ice. Work crews were removing its cargo, bags of potatoes, before attempting to lift the vehicle off its side, a state police spokesman said.