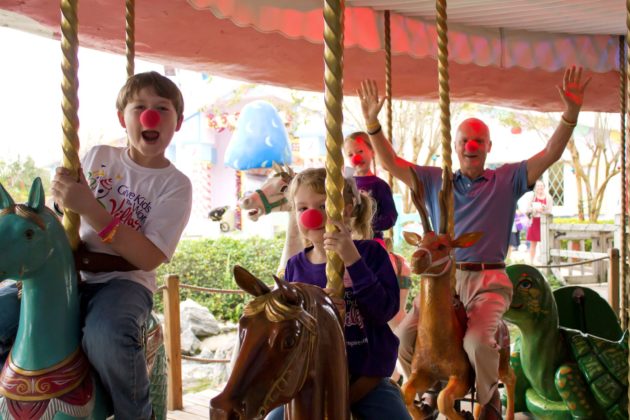 NEW YORK (Reuters) – Harris Rosen has a chain of eight hotels bearing his name in the Orlando area, but he makes most of his headlines these days for giving away his fortune.

The 80-year-old entrepreneur of Rosen Hotels & Resorts, who grew up on the Lower East Side of New York, adopted the Tangelo Park neighborhood near his hotels and has paid for preschool programs and college for local students. Among some of his other many causes: He endowed the Rosen College of Hospitality Management at the University of Central Florida, and he has been involved in charity efforts in Haiti, the home country of many of his staff.

Rosen spoke to Reuters about how he came to make his fortune and then give it away.

A: It came from my two granddads. Both of them came from Eastern Europe. One had a little restaurant on Lower East Side; the other made wooden barrels.

When my mom and dad got married, they went into business together to purchase little apartments where immigrants stayed. Unfortunately, there was a fairly significant depression in 1920s. They lost everything because they would not ask anyone to leave.

One night they came over, and said, essentially, you have something in your genes. You are going to be a businessperson, but don’t ever borrow money.

I’ve lived with that all my life: I’m going to be a businessperson, and I can’t borrow money. That’s impossible! The first hotel I bought, I put down $20,000 and assumed a $2.5 million mortgage.

Q: What did your first job teach you?

A: When I was 10, I overheard fishermen talking about how badly they needed worms. So I went into the night crawler business. I hunted them with a flashlight, and then arrived early at fishing pier.

I learned that you try to find something that people need and want, charge a fair price and save as much as you can.

Q: Once you got some money together, what was your investing philosophy?

A: One of the first stocks I bought was Avon, because I met some of the ladies who ran the company. They said, “Harris, Buy the stock.” I couldn’t buy more than 10-15 shares, but I’d look at Avon every morning, and I did very well.

Then I bought Automatic Data Processing, because the grandmother of the company founder worked as a clerk in their sales office at the Waldorf Astoria where I also worked.

I don’t think I’ve owned anything other than my company for about maybe 45 years. I invest only in Rosen.

Q: When did you start getting very generous with employee benefits?

A: Early on, about 30 years ago, I discovered I wasn’t very happy with our whole health plan. I didn’t understand why our premiums would go up year after year.

We had a tiny little office where our accounting folks stayed, but they outgrew it. I said, we’ll convert it to primary care health center. I called a friend who knew insurance and said, ‘Help me start my own insurance company.’ Then I said: ‘Let’s look for a doctor.’

We focus on keeping people healthy.

Q: You have many charity projects, how do you decide how to give away your money?

A: About 25 years ago, sitting at my desk, I heard a voice and it said, “Harris, you have been blessed beyond anything you imagined, and now it would be appropriate to offer a helping hand to those in need.”

Q: How do you pass along this legacy of giving to your children and grandchildren?

A: I just think they need to do the kind of work that they enjoy. They need to be honest and treat people with respect, and if they are in the position to become philanthropic, what they need to do is express that generosity by helping others.

I’m very happy with the way things are working out. I love the opportunity that I have had to offer a helping hand to so many people.

(Follow us @ReutersMoney or at http://www.reuters.com/finance/personal-finance. Editing by Lauren Young and Cynthia Osterman)