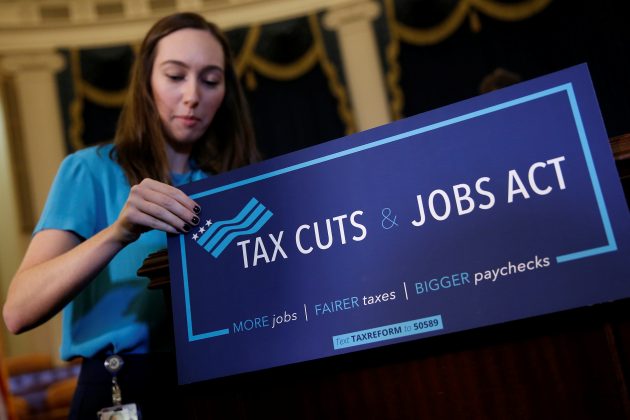 A congressional aide places a placard on a podium for the House Republican's legislation to overhaul the tax code on Capitol Hill. REUTERS/Joshua Roberts

By David Morgan and Amanda Becker

WASHINGTON (Reuters) – President Donald Trump’s drive for the deep tax cuts that he promised as a candidate reached a major milestone on Thursday, with his fellow Republicans in the House of Representatives unveiling long-awaited legislation to overhaul the tax code.

The bill called for slashing the corporate tax rate to 20 percent from 35 percent and cutting tax rates on individuals and families by consolidating the current number of tax brackets to four from seven: 12 percent, 25 percent, 35 percent and 39.6 percent, which is now the top rate and would be retained.

Largely in line with expectations for the tax-cut plan they have been developing behind closed doors for weeks, the House tax-writing Ways and Means Committee proposed roughly doubling the standard deduction for individuals and families.

It also called for preserving the home mortgage interest deduction for existing mortgages and for newly purchased homes up to $500,000, as well as continuing the deduction for state and local property taxes, capped at $10,000. It would retain the tax benefits of popular retirement savings programs including 401(k) and IRA.

The bill is the starting gun for a frantic race toward what Trump and Republicans in the House and Senate hope will be their first major legislative victory since he took office in January: the enactment this year of a package of deep tax cuts.

“This is the beginning of the end of this horrible tax code,” House Ways and Means Committee Chairman Brady told reporters on Thursday as he entered a meeting with Republican lawmakers ahead of the bill’s release.

The bill would create a new family tax credit, double exemptions for estate taxes on inherited assets and repeal the estate tax over six years, while also allowing small businesses to write off loan interest, according to the document.

The bill would cap the maximum tax rate on small businesses and other non-corporate enterprises at 25 percent, down from the present maximum rate on “pass-through” income of 39.6 percent. It would also set standards for distinguishing between individual wage income and actual pass-through business income to prevent tax-avoidance abuse of the new, lower tax level.

It would create a new 10-percent tax on U.S. companies’ high-profit foreign subsidiaries, calculated on a global basis, in a move to prevent companies from moving profits overseas, the Wall Street Journal reported.

Foreign businesses operating in the United States would face a tax of up to 20 percent on payments they make overseas from their American operations, the Journal added.

U.S. equities have rallied in 2017 to a series of record highs, partly on expectations of deep corporate tax cuts. They were down slightly on Thursday as initial details of the Republican plan emerged. Housing stocks fell; bank stocks initially fell but then cut their losses.

Investors cautioned the tax plan was preliminary and it was too soon to gauge the effect on specific industries and asset classes. Long-dated bond yields and the U.S. dollar were down.

“This was what the market has been waiting for,” said Sean Simko, head of fixed-income management at Sei Investments Co in Pennsylvania. “It’s pretty much what the market has heard and priced in for. We are also waiting for the Fed chair nominee announcement and the payrolls number (Friday). Until then, the markets are going to be pretty contained.”

Congress has not succeeded with comprehensive tax changes since 1986, when Republican Ronald Reagan was in the White House and Democrats controlled the House. Bipartisan cooperation led to the passage of that plan, but Republicans have frozen Democrats out of the process of developing this legislation and passed a budget plan that would enable them to pass it with no Democratic votes.

Independent analysts have said that, based on an outline of the plan previously made public, corporations and the wealthiest Americans would benefit the most, and the federal deficit would be greatly expanded over the next decade because of a loss of tax revenue.

Trump said at the White House this week that he wanted Congress to pass the tax overhaul by the U.S. Thanksgiving holiday on Nov. 23.

Trump, House Republican leaders and Republican members of Brady’s panel will then meet at the White House on Thursday afternoon. Trump is also meeting separately with Republican senators, who must also unite to pass the tax plan.

Brady himself predicts the initial legislation will change next week, when his panel is due to begin preparing it for an eventual House vote.

While Republicans control the White House and both chambers of Congress, intra-party differences have prevented them from passing major legislation sought by Trump, as exemplified by the collapse of their effort to dismantle the Obamacare law. Any failure to pass tax cuts legislation would call into question Republicans’ basic ability to deliver on promises.

The bill must also pass the Senate, where Republicans hold a slimmer 52-48 majority and earlier this year failed to garner enough votes to pass a major healthcare overhaul. Senate Republican leaders have said they aim to finish their work on taxes by year-end.

Democrats have criticized the proposed tax cuts as a giveaway to corporations and the wealthy that would harm workers and middle-class Americans.