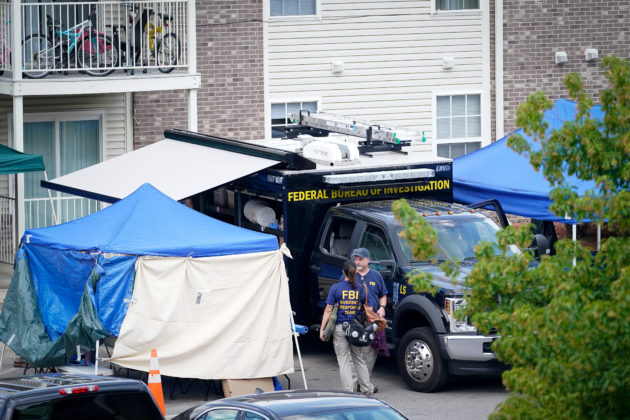 Personnel with the Federal Bureau of Investigation stage outside the apartment of Breonna Taylor as the agency executes a search warrant of the home in Louisville, Kentucky, U.S. June 19, 2020. REUTERS/Bryan Woolston

LOUISVILLE, Ky. (Reuters) – One of three officers involved in the shooting death of Breonna Taylor, a Black woman killed in a hail of gunfire when drug investigators burst into her home in Louisville, Kentucky, three months ago was dismissed from the police department on Tuesday.

Taylor, a 26-year-old emergency medical technician, was killed on March 13 after the officers entered her apartment bearing a “no-knock” arrest warrant.

In a termination notice issued after an administrative hearing, Louisville police chief Robert Schroeder wrote that detective Brett Hankison “displayed an extreme indifference to the value of human life” when he “wantonly and blindly fired” 10 rounds into Taylor’s home.

Schroeder said the gunshots were fired through a patio door and window covered with material obscuring Hankison’s line of sight, preventing him from knowing whether anyone was inside the apartment, let alone whether they posed a threat. Some of the rounds he fired flew into the unit next door, the chief wrote.

Two other officers involved in the raid remain on administrative reassignment. No criminal charges have been filed against any of the three.

The notice also said Hankison, who joined the department in 2003, was disciplined in 2019 for reckless conduct that injured an innocent person.

Taylor’s slaying, which returned to prominence following the May 25 death in Minneapolis police custody of George Floyd, has become a rallying cry in nationwide protests against police brutality and racial bias in the U.S. criminal justice system.

In the immediate aftermath of the Taylor killing, police said the officers had knocked on the door before forcing entry and were shot at by Taylor’s boyfriend, Kenneth Walker. One officer was struck in the leg, and all three returned fire, hitting Taylor at least eight times, according to the Louisville Courier-Journal.

Walker was charged with attempted murder and assault, but prosecutors later dropped the charges, the Courier-Journal reported.