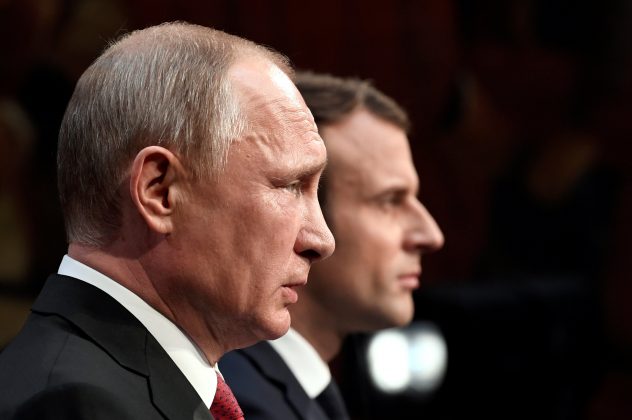 French President Emmanuel Macron (R) and Russian President Vladimir Putin (L) give a joint press conference at the Chateau de Versailles before the opening of an exhibition marking 300 years of diplomatic ties between the two countries in Versailles, France, May 29, 2017. REUTERS/Stephane De Sakutin/Pool

By Michel Rose and Denis Dyomkin

VERSAILLES, France (Reuters) – French President Emmanuel Macron met Russia’s Vladimir Putin near Paris on Monday, promising some frank talking with the Kremlin leader after an election campaign in which his team accused Russian media of trying to interfere.

Macron, who took office two weeks ago, has said dialogue with Russia is vital in tackling a number of international disputes. Nevertheless, relations have been beset by mistrust, with Paris and Moscow backing opposing sides in the Syrian civil war and at odds over the Ukraine conflict.

Fresh from talks with his Western counterparts at a NATO meeting in Brussels and a G7 summit in Sicily, Macron was hosting the Russian president at the sumptuous 17th Century palace of Versailles outside Paris.

Amid the baroque splendor, Macron will use an exhibition on Russian Tsar Peter the Great at the former royal palace to try to get Franco-Russian relations off to a new start.

The 39-year-old French leader and Putin exchanged a cordial,  businesslike handshake and smiles when the latter stepped from his limousine for a red carpet welcome, with Macron appearing to say “welcome” to him in French.

The two men then entered the palace to start their talks.

“It’s indispensable to talk to Russia because there are a number of international subjects that will not be resolved without a tough dialogue with them,” Macron told reporters at the end of the G7 summit on Saturday, where the Western leaders agreed to consider new measures against Moscow if the situation in Ukraine did not improve.

“I will be demanding in my exchanges with Russia,” he added.

Relations between Paris and Moscow were increasingly strained under former President Francois Hollande.

Putin, 64, cancelled his last planned visit in October after Hollande accused Russia of war crimes in Syria and refused to roll out the red carpet for him.

Then during the French election campaign the Macron camp alleged Russian hacking and disinformation efforts, at one point refusing accreditation to the Russian state-funded Sputnik and RT news outlets which it said were spreading Russian propaganda and fake news.

Two days before the May 7 election runoff, Macron’s team said thousands of hacked campaign emails had been put online in a leak that one New York-based analyst said could have come from a group tied to Russian military intelligence.

Moscow and RT itself rejected allegations of meddling in the election.

Putin also offered Macron’s far-right opponent Marine Le Pen a publicity coup when he granted her an audience a month before the election’s first round. 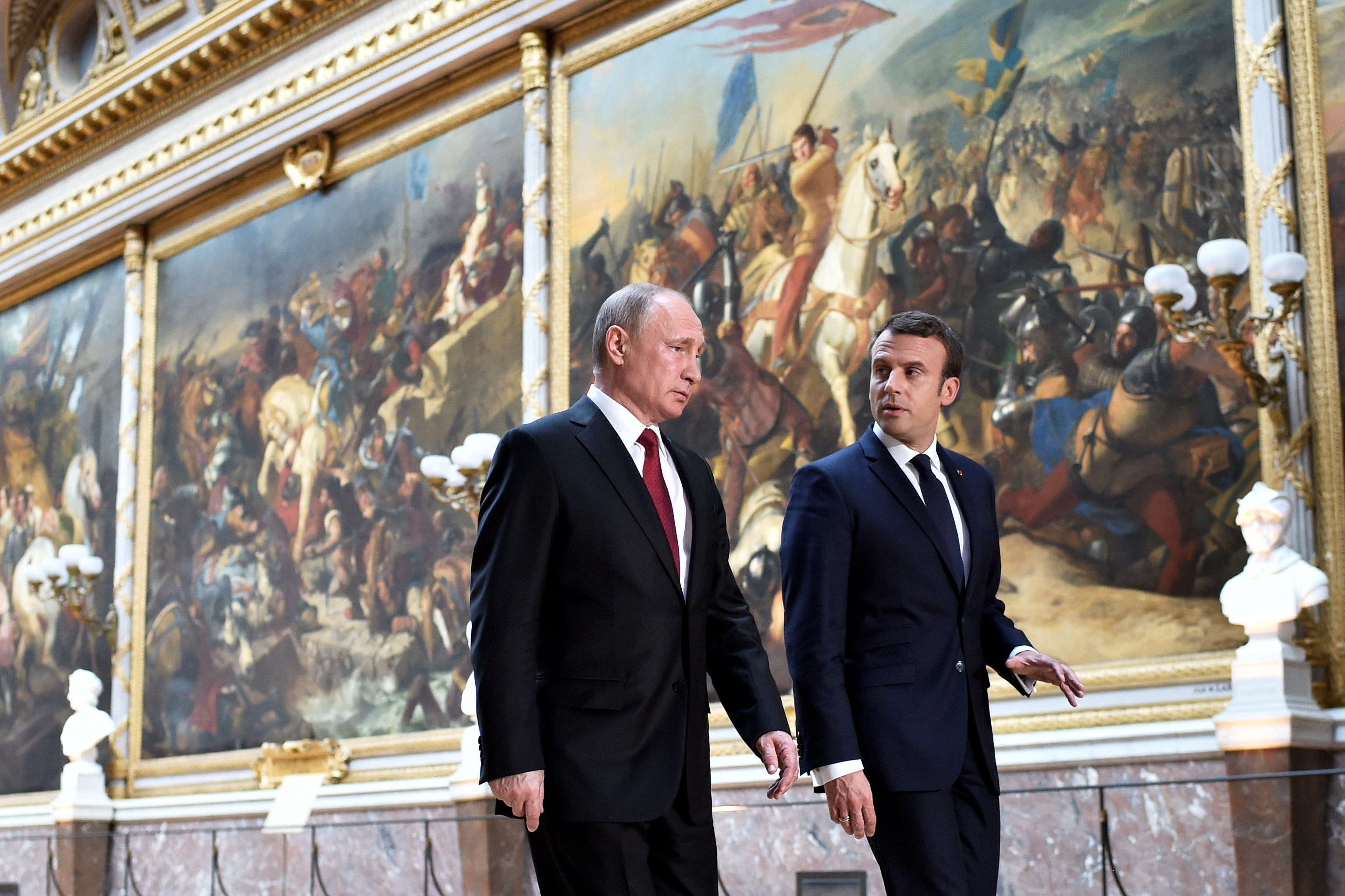 French President Emmanuel Macron (R) speaks to Russian President Vladimir Putin (L) in the Galerie des Batailles (Gallery of Battles) as they arrive for a joint press conference at the Chateau de Versailles before the opening of an exhibition marking 300 years of diplomatic ties between the two countries in Versailles, France, May 29, 2017. REUTERS/Stephane De Sakutin/Pool

Nonetheless, Russia’s ambassador to Paris, Alexander Orlov said on Monday that he expected this first meeting between the two men to be full of “smiles” and marking the beginning of “a very good and long relationship”.

Orlov, speaking on Europe 1 radio, said he believed that Macron was “much more flexible” on the Syrian question, though he did not say why he thought this. Putin would certainly invite Macron to pay a visit to Moscow, he said.

Putin’s schedule included a trip to a newly opened Russian Orthodox cathedral in Paris – a call he had been due to make for its inauguration in October, but which was cancelled along with that trip.

Macron decisively beat Le Pen, an open Putin admirer in a fraught presidential election campaign, and afterwards the Russian president said in a congratulatory message that he wanted to put mistrust aside and work with him.

Hollande’s former diplomatic adviser, Jacques Audibert, noted how Putin had been excluded from what used to be the Group of Eight nations as relations with the West soured. Meeting in a palace so soon after the G7 summit was a clever move by Macron.

“Putin likes these big symbolic things. I think it’s an excellent political opportunity, the choice of place is perfect,” he told CNews TV. “It adds a bit of grandeur to welcome Putin to Versailles.”

The Versailles exhibition commemorates a visit to France 300 years ago by Peter the Great, known for his European tastes.

A Russian official told reporters in Moscow on Friday that the meeting was an opportunity “to get a better feel for each other” and that the Kremlin expected “a frank conversation” on Syria.

While Moscow backs President Bashar al-Assad, France supports rebel groups trying to overthrow him. France has also taken a tough line on European Union sanctions on Russia, first imposed when it annexed Crimea from Ukraine in 2014, and cancelled a $1.3 billion warship supply contract in 2015.

During the campaign, Macron backed expanded sanctions if there were no progress with Moscow implementing a peace accord for eastern Ukraine, where Kiev’s forces have been battling pro-Russian separatists.

Since being elected, Macron appears to have toned down the rhetoric, although he noted the two leaders still had “diverging positions” in their first phone call.