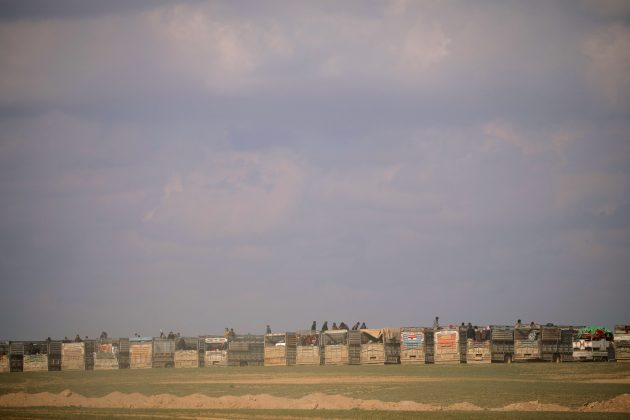 DEIR AL-ZOR PROVINCE, Syria (Reuters) – A mass grave containing the bodies of dozens of people killed by Islamic State, including many women, has been found in territory recently seized by the U.S.-backed Syrian Democratic Forces (SDF), an SDF official said on Thursday.

The SDF is poised to wipe out the last vestige of Islamic State’s territorial rule at the besieged village of Baghouz near the Iraqi border. But the operation has been held up as the SDF seeks to evacuate thousands of civilians.

“We will announce the complete victory over Daesh (Islamic State) in a week,” SDF commander-in-chief Mazloum Kobani said in a video released by the SDF on Thursday, speaking during a meeting with a group of SDF fighters freed from IS captivity.

It was not immediately clear when the video was filmed.

The SDF announced on Thursday it had freed 24 of its fighters from the jihadist group.

The Islamic State (IS) enclave at Baghouz, a tiny area on the eastern bank of the Euphrates River, is the last populated territory held by the jihadists who have been steadily driven by an array of enemies from swathes of land they once held.

Though the fall of Baghouz will mark a milestone in the campaign against IS, the group is still seen as a security threat, using guerrilla tactics and still holding some territory in a remote area west of the Euphrates River.

The mass grave was found around one week ago in an area of Baghouz already seized from IS and is still being excavated, SDF commander Adnan Afrin told Reuters. It was not clear when the people had been killed.

The SDF was seeking to confirm whether the bodies, most of them decapitated, were those of Yazidi sect members enslaved by IS, he said, adding: “They were slaughtered.”

Thousands of members of the minority Yazidi sect from Iraq were forced into sexual slavery by IS when they surged across the border in 2014 and seized swathes of territory.

More than 3,000 other Yazidis were killed in an onslaught the United Nations later described as genocidal, which prompted the first U.S. air strikes against IS. Thousands more fled on foot and many remain displaced more than four years later.

Some 40,000 people have crossed from the jihadists’ diminishing territory in the last three months as the U.S.-backed SDF sought to finish off the group. The numbers of people, who are still pouring out of Baghouz, have surpassed initial estimates.

Afrin said many of the people coming out of Baghouz had been underground in caves and tunnels.

The SDF has said it wants to evacuate civilians inside Baghouz before storming it or forcing the surrender of the remaining jihadists, who the SDF has said are mostly foreigners.

The U.S.-led coalition said Baghouz had been “more crowded with both civilians and fighters than expected”.

“The overflow during the lull in battle has been difficult for the SDF and they have responded to everything well …,” said Colonel Sean Ryan, the coalition spokesman.

Afrin said the 24 fighters who were announced freed on Thursday were mostly captured by IS during the Deir al-Zor campaign and were rescued by its special forces based on intelligence.

The SDF has said several hundred jihadists are believed to be holed up in Baghouz, a cluster of hamlets surrounded by farmland on the eastern bank of the Euphrates River.

Afrin said there had been no negotiations with IS but “in the future it is possible they will request negotiations to surrender”. He said IS was still holding hostages inside Baghouz, both civilians and SDF fighters.