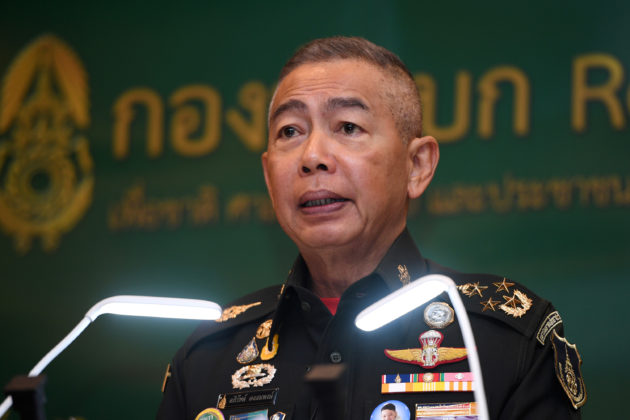 Thai army chief Apirat Kongsompong speaks during a news conference in Bangkok, Thailand, following last weekend's shooting rampage by a soldier at a mall in the city of Nakhon Ratchasima, February 11, 2020. REUTERS/Chalinee Thirasupa

NAKHON RATCHASIMA, Thailand (Reuters) – A Thai soldier’s killing of 29 people in a rage over a housing deal involving his superior officer has brought attention to the business dealings of army personnel in a country that just emerged from direct military rule.

Thailand’s army chief has promised to investigate and also acknowledged a wider problem of inappropriate business deals involving army officers and their subordinates, vowing to root out the practise.

The military, which staged its latest coups 2006 and 2014, wields extraordinary power in Thailand and proclaims its discipline to justify repeatedly overthrowing elected governments, but the killings on the weekend put a spotlight on some of its own members’ questionable dealings.

Sergeant Major Jakrapanth Thomma was meeting on Saturday with his commanding officer and the officer’s mother-in-law to discuss their dispute when he opened fire, killing both of them. He then drove to his army camp, a Buddhist temple and a shopping mall, gunning people down until security forces killed him on Sunday morning.

Hours before, Jakrapanth had posted on Facebook denouncing people who cheated others to become wealthy.

“Do they think they can spend the money in hell?” Jakrapanth asked.

The military has a long tradition of involvement in business and it has been an open secret that some officers branch out into private business deals.

“It is actually quite common for senior military officers to be involved in real estate, especially in Thailand’s rural areas,” said Paul Chambers, a politics expert at Naresuan University in northern Thailand.

The military is one of the largest land-holders in some provinces, controlling vast bases that also can be mini-cities unto themselves.

“Many officers tend to want to supplement their meager salaries with money they can easily make through military power regarding real estate,” Chambers said.

Military discipline is regularly extolled by Prime Minister Prayuth Chan-ocha, who launched the last coup in 2014 and last year retained power by leading a pro-army party to victory in an election opposition parties said was engineered to cement army influence.

One prominent opposition group, the Future Forward Party, has openly opposed military influence over politics, arguing for changes in the military-written constitution, an end to conscription and cutting the army budget.

Army chief General Apirat Kongsompong has said he will set up a direct line for soldiers who feel they are being exploited by superior officers.

“The cause and reason for the perpetrator in this incident were the injustice he received from his commanding officer and relatives,” Apirat said in a press briefing on Tuesday.

He also acknowledged wider reports of officers exploiting a system of military housing loans and welfare schemes for personal gain.

“There are cooperation between units and private contractor that lobby for deals,” Apirat said

“I know about this and I want to assure that in the next three months some generals and colonels will lose their jobs,” he said.

Details of the deal that enraged Jakrapanth are not clear, but it appears to have involved his purchase of a house, brokered by the mother-in-law of his commanding officer, Colonel Anantharot Krasae.

Police told Reuters that Jakrapanth argued he was owed 50,000 baht ($1,600) by the mother-in-law, whose husband said she had already given the money to an agent who failed to pass it on to the soldier. Members of the family did not respond to messages from Reuters.

However, lawyer Atchariya Ruangrattanapong, said the dispute may have been over a larger amount – 375,000 baht ($12,000) – and said he has been approached since the shooting by 20 other members of Jakrapanth’s unit complaining about the same scheme.

“Apart from this group, I have been informed that there are hundreds of other soldiers who are scammed in a similar situation,” said Atchariya.

“All this is an ongoing problem that not just the army but also the government faces,” Kongcheep said.

But the military has a lack of transparency beyond other institutions that makes it easier to exploit the system, said Anusorn Unno, a lecturer at Thammasat University.

“The army is like a closed kingdom,” Anusorn said.

“Those with higher ranks have the advantage in doing business within this closed system.”

The Bangkok Post said in an editorial that questionable personal deals were “the tip of the iceberg” and argued the military budget should be subject to independent audits, instead of the internal ones established by the last ruling junta.