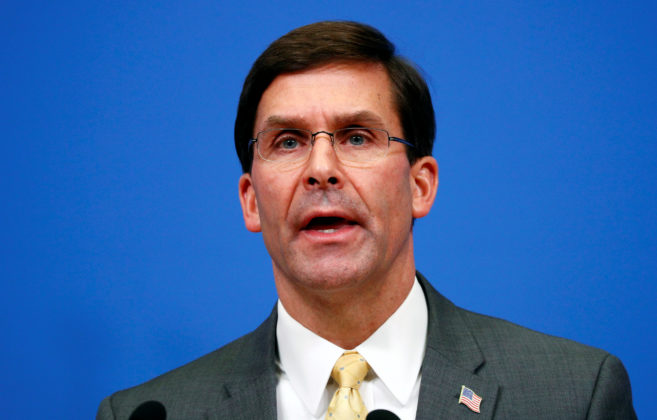 (Reuters) – U.S. Defense Secretary Mark Esper said on Thursday that the United States and the Taliban had negotiated a proposal for a seven-day reduction in violence.

Sources had told Reuters that a U.S.-Taliban peace deal could be signed this month if the Taliban significantly reduces violence, which could lead to an eventual withdrawal of U.S. troops from Afghanistan.

“The United States and the Taliban have negotiated a proposal for a seven-day reduction in violence,” Esper told reporters during a news conference in Brussels at NATO headquarters.

“I’m here today consulting with allies about this proposal, and we’ve had a series of productive bilateral and collective meetings about the path forward,” he added.

The tentative timeline shared with Reuters by sources came a day after Afghan President Ashraf Ghani said there had been a possible breakthrough in U.S.-Taliban talks in Qatar.

The talks had been deadlocked in part over a U.S. demand that the insurgents agree to sharply reduce violence as part of any American troop withdrawal accord.

There are about 13,000 U.S. troops as well as thousands of other NATO personnel in Afghanistan, 18 years after a U.S.-led coalition invaded the country following the Sept. 11, 2001, al Qaeda attacks on the United States.