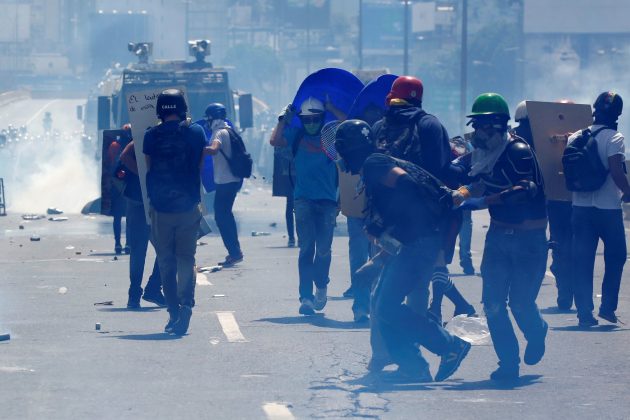 By Anggy Polanco and Andreina Aponte

SAN CRISTOBAL, Venezuela/CARACAS (Reuters) – Mobs looted shops and fought security forces overnight in Venezuela’s restive western region, where three soldiers were being charged on Thursday with the fatal shooting of a man who was buying diapers for his baby, witnesses said.

Six weeks of anti-government unrest have resulted in at least 44 deaths, as well as hundreds of injuries and arrests in the worst turmoil of President Nicolas Maduro’s four-year rule of the South American OPEC-member country.

Protesters are demanding elections to kick out the socialist government that they accuse of wrecking the economy and turning Venezuela into a dictatorship. Maduro, 54, the successor to late leader Hugo Chavez, says his foes are seeking a violent coup.

One of Maduro’s main opponents, local governor Henrique Capriles, said on Thursday that his passport was confiscated when he was at the airport outside Caracas for a flight to New York, where he was to visit the United Nations and denounce human rights violations.

“My passport is valid until 2020. What they want to do here is avoid us going to the United Nations,” Capriles said, before returning to the capital to join a protest march.

The U.N. high commissioner for human rights, Zeid Ra’ad al-Hussein, was due to meet with Capriles in New York on Friday.

“Hope (Capriles’) passport removal is not reprisal linked to planned meeting with me tomorrow,” Zeid said on Twitter.

The move comes a month after Capriles, a two-time presidential candidate who was seen by many as the opposition’s best chance in the presidential election scheduled for 2018, was banned from holding political office for 15 years.

Capriles, a sports-loving lawyer who has tried to shake the opposition’s reputation of elitism by focusing on grassroots efforts with poor Venezuelans, narrowly lost the 2013 vote against Maduro, and the two frequently lock horns.

UNREST IN THE WEST

Across the country near the border with Colombia, clashes and lootings raged overnight, even though the government sent 2,000 troops to Tachira state.

Security forces fired teargas at stone-throwing gangs, and crowds smashed their way into shops and offices in San Cristobal, the state capital, and elsewhere.

Manuel Castellanos, 46, was shot in the neck on Wednesday when caught in a melee while walking home with diapers he had bought for his son, witnesses said.

Diapers have become prized products in Venezuela due to widespread shortages of basic domestic items.

The State Prosecutor’s Office said three National Guard sergeants would be charged later on Thursday for their “presumed responsibility” in Castellanos’ killing.

Earlier in the week, a 15-year-old was shot dead when out buying flour for his family’s dinner.

Most shops in San Cristobal, a traditional hotbed of anti-government militancy, were closed on Thursday, with long lines at the few establishments open.

In Caracas, protesters sought to march to the Interior and Justice Ministry but were blocked on a major highway by security forces firing tear gas and using armored vehicles. That sparked now-familiar scenes of masked youths brandishing shields and throwing stones at the security line.

International anxiety about the Venezuelan crisis is growing.

“We will be working with Colombia and other countries on the Venezuela problem,” Trump said. “It is a very, very horrible problem. And from a humanitarian standpoint, it is like nothing we’ve seen in quite a long time.”

France called for mediation amid the worsening situation, and Britain warned its citizens against “all but essential travel” to Venezuela.