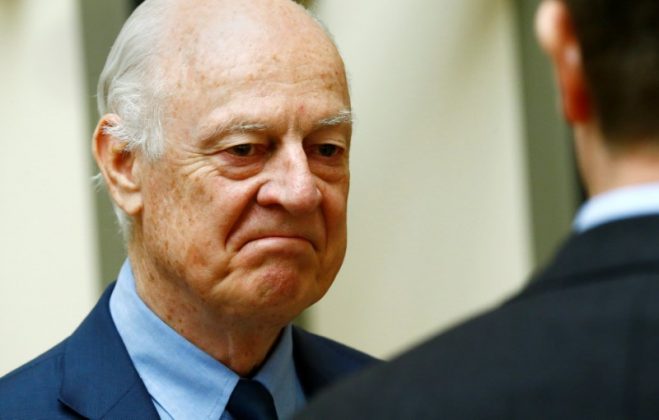 GENEVA (Reuters) – Syria peace talks hosted by the United Nations in Geneva spawned a new series of meetings on Thursday with no hint of tangible progress toward a deal to end the six-year-old civil war.

U.N. mediator Staffan de Mistura had promised a refreshingly brisk pace of business-like meetings over a short four-day round, with new elections, a new constitution, reformed governance and counter-terrorism on the agenda.

He opened proceedings on Thursday by proposing setting up a “consultative mechanism”, which he would head, to avoid a power vacuum in Syria before a new constitution is in place.

That was rejected by the Syrian government and raised a string of questions from the opposition, so de Mistura said he was “moving beyond” those discussions to start a new set of expert meetings with each side.

A U.N. statement referred to “an initial part of a process of expert meetings on legal and constitutional issues of relevance to the intra-Syrian talks”.

In a sign of the chasm between foes who have frustrated repeated international efforts at peacemaking, they are not negotiating face-to-face but only in turn with de Mistura.

Government negotiator Bashar al-Ja’afari told reporters that the expert meetings were an initiative from his delegation and would take place on Thursday and continue Friday if needed.

“We hope that this step … will help in pushing this round forward, and the Geneva process in general toward the seriousness that is hoped for by everyone,” Ja’afari said.

He added that the constitution was “the exclusive right of the Syrian people, and we do not accept any foreign interference in it”.

Opposition spokesman Yahya al-Aridi told Reuters that the Damascus delegation was trying to divert attention from the main objective of the talks – political transition, a phrase used by the opposition to mean Assad’s ouster.

Asked if the three days of talks had made headway, he said: “Not too much. Original expectations were not very high.”

The United States and Russia – who back the rebels and Assad respectively – forged an international consensus in December 2015 mandating de Mistura to push for a political solution.

But the talks have been increasingly marginalized over the past year as Assad’s forces, backed by Russia and Iran, have won back territory from the rebels, while the United States has largely stepped back from a leading role in Syrian diplomacy.

Syria’s war has killed hundreds of thousands and created more than 6 million refugees. About 625,000 people are besieged, mostly by Assad’s forces.