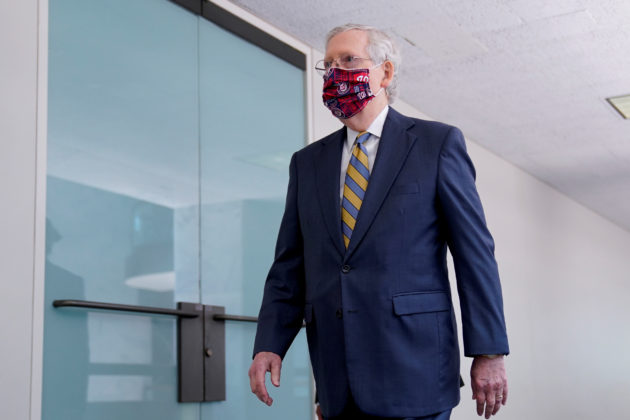 WASHINGTON (Reuters) – Senate Majority Leader Mitch McConnell on Thursday said the U.S. economy needs an “additional boost” to cope with the fallout of the coronavirus pandemic, as his Democratic counterparts and White House officials try to hash out a next wave of relief.

As talks neared the end of their second week, the four principal negotiators – a group that does not include McConnell – appeared to be near agreement on some topics, but still trillions of dollars apart on major issues including the size of a federal benefit for tens of millions of unemployed workers.

McConnell said he agreed with Federal Reserve Chairman Jerome Powell and Treasury Secretary Steven Mnuchin that agreement is needed on another aid package, even though some of his fellow Republicans in the Senate do not think so.

McConnell continued to insist that unemployment benefits in any deal should be adjusted downward and that the agreement should include liability protections against lawsuits for reopening businesses during the pandemic.

Others not in the negotiation room considered their own actions, as Republican senators said they had been told that no deal by Friday would mean no deal at all.

Republican President Donald Trump stood ready to use executive orders to address issues such as unemployment benefits and protections against evictions if talks failed, according to Meadows.

Republican Senator Marco Rubio told reporters that the Senate on Thursday could also take up a new version of the Payroll Protection Program that provides financial assistance to small businesses in the form of forgivable loans.

Congress passed more than $3 trillion in relief legislation early in the pandemic. But lawmakers missed a deadline last week to extend the $600 per week in enhanced unemployment payments that played a key role in propping up the economy.

Pelosi and Schumer have pushed for a comprehensive package of assistance for the unemployed, the poor, hospitals, schools and state and local governments.

“The leader and I are determined that we will come to agreement. But it has to meet the needs of the American people,” Pelosi said.

Mnuchin has warned that the Trump administration would not accept “anything close” to the $3.4 trillion in new aid sought by Democrats. Senate Republicans have proposed a $1 trillion package that many of their own members have rejected.