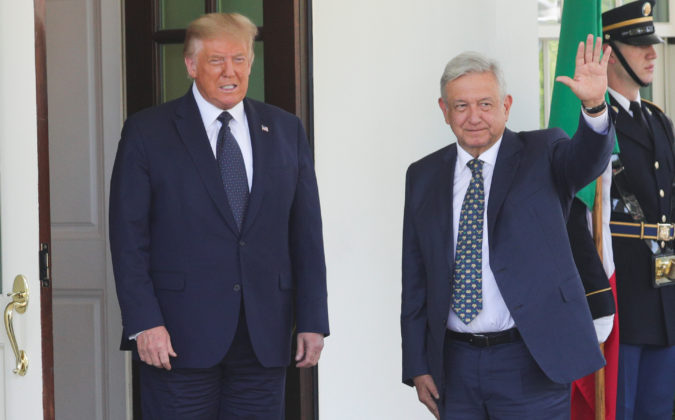 The leftist leader has brushed off criticism at home to push ahead with plans to meet Trump, a Republican widely disliked in Mexico because of his incendiary remarks about its people.

The meeting ostensibly aims to celebrate the start of the United States-Mexico-Canada Agreement (USMCA) trade deal, but disputes over energy sector contracts in Mexico could arise as the two men got together in the afternoon.

Mindful of the coronavirus pandemic, which is still surging in Mexico and the United States, the two did not shake hands as they met outside the White House. Neither wore face masks.

Two people familiar with preparations for the meeting said the private sector was eager for Trump to raise concerns about Lopez Obrador’s attempts to renegotiate billions of dollars worth of contracts in energy infrastructure.

One said the issue had been put high on Lighthizer’s agenda for the meeting, though despite promptings from his own ambassador in Mexico, Trump has made little of it so far. Lighthizer’s office did not reply to a request for comment.

Lopez Obrador’s government is slowly rolling back a 2013-14 opening of the energy industry in favor of a state-led model, and has called a number of major contracts into question.

A senior U.S. official said on Monday evening Mexico’s government had pledged to uphold those contracts.

“So, we are certainly hoping that they will keep their word,” the official told reporters.

Mexican-U.S. cooperation over Trump’s immigration policies could feature prominently, although one source familiar with the matter said the talks aimed to prioritize business.

The summit was pitched to mark the start of USMCA, which replaced the North American Free Trade Agreement that Trump long lambasted. But the two-day gathering was scaled back to a single day after Canadian Prime Minister Justin Trudeau opted out amid new U.S. threats of tariffs on Canadian goods.

Lopez Obrador is being joined by a delegation of business officials, including Mexico’s richest man, telecoms magnate Carlos Slim. They will dine on Wednesday evening with Trump and American business executives at the White House.

Lopez Obrador’s critics and some U.S. Democrats say Trump wants to use the meeting to drum up support among Hispanic voters ahead of the Nov. 3 presidential election.