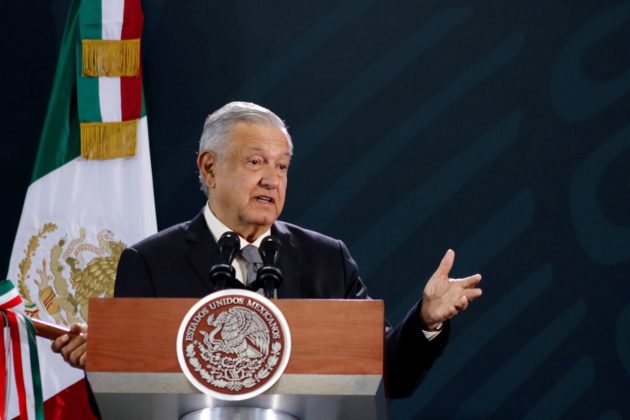 CULIACAN, Mexico (Reuters) – Mexico sent in special forces troops on Monday to patrol a northern city in the wake of a cartel assault that freed Joaquin “El Chapo” Guzman’s son in a hail of bullets, and also won a U.S. promise to help stop gun-smuggling at their shared border.

More than 400 soldiers turned up in Culiacan over the weekend after gunmen from the Sinaloa cartel briefly took control of the city and forced security forces to free the drug lord’s son from a botched arrest attempt last week.

“We are going to protect the citizens, that is our mission,” said General Carlos Ramon Carrillo de Villar, who oversaw formations of soldiers marching at a media event. “We are fighting insecurity.”

The convoys of army trucks with mounted machine guns rumbling through Culiacan’s streets were meant to instill confidence. However, a national poll on Monday showed two thirds of respondents believe drug lords and mobsters are more powerful than the government after the gunbattles last week that forced an army retreat.

President Andres Manuel Lopez Obrador has insisted the decision to release Ovidio Guzman was the only way to save lives after cartel henchmen erected roadblocks, torched trucks and opened fire with heavy, military-style weapons.

After a telephone call with U.S. President Donald Trump over the weekend, Mexican Cabinet ministers met U.S. Ambassador Christopher Landau to ask for help stemming the flow of weapons bought legally in the United States and sold to cartels south of the border.

“We both agreed to move quickly to share information and deliver specific results,” the U.S. Embassy in Mexico said on Twitter, calling it Operation Frozen. “The commitment made by Mexico and the United States will strengthen capacities to address and reduce one of the causes of violence.”

The Mexican government said earlier in a statement the United States had promised efforts to clamp down on the illegal trade, which is believed to be the source of most firearms in the hands of Mexican criminals.

“Arms trafficking is a significant problem and one the United States is addressing with renewed focus in Mexico,” a State Department official said in response to a question from Reuters.

Videos of the attacks in Culiacan last week showed cartel soldiers firing armor-piercing .50 caliber rifles and at least one truck mounted with a heavy machine gun – weaponry that is not available by legal means in Mexico.

Lopez Obrador has faced heavy criticism for the handling of the raid, which critics say looked like a capitulation to criminals and risked encouraging cartels to use more force to resist arrests.

The president has defended his policy of trying to dial down clashes with drug cartels to reduce murder rates.

Many people could have been killed had security forces attempted to hold Guzman against the cartel foot soldiers, Lopez Obrador told a regular news conference.

“Not just the criminals, who are also human beings, the soldiers, who we must protect,” he said, “but (also) civilians.”

“I always have great belief in the wisdom of the people, and I know that the majority of Mexicans supported the government’s decision,” the veteran leftist said.

Homicide data released on Sunday offered some hope for the strategy, showing murders fell in September for the third straight month.

Mexican authorities opened some 2,403 murder investigations, in the month, a decline of 7% from the same month in 2018 and the lowest monthly total since April, according to government figures. The months of July through September were the three most violent in 2018.

Even so, the number of murders remains on track to surpass last year’s record total of 29,000.

One poll released on Monday showed opinion was split over the operation in Culiacan. A survey by newspaper Reforma said 49% disagreed with the release of the younger Guzman after his brief arrest by military police versus 45% who backed it.

A separate survey by polling firm GCE put the numbers at 54%-34% against letting him go. Both surveyed 400 people.

The GCE poll showed 63.5% of respondents believed drug traffickers were more powerful than the government.

More than three-quarters in the GCE poll believed the release of Guzman would encourage gangs to continue their operations, while nearly seven out of 10 in the Reforma survey said organized crime was strengthened by what had happened.

(For a graphic on ‘Murders in Mexico’ click https://tmsnrt.rs/2qqSqoW)