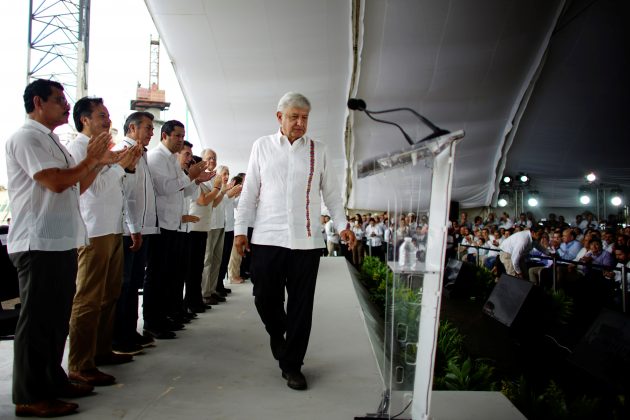 By Anthony Esposito and Doina Chiacu

MEXICO CITY/WASHINGTON (Reuters) – Mexican President Andres Manuel Lopez Obrador said on Thursday he has not discussed a proposed border wall with President Donald Trump, as the U.S. leader seemingly backtracked on threats to make Mexico pay for the controversial project.

“We have not discussed that issue, in any conversation. … It was a respectful and friendly conversation,” Lopez Obrador told reporters following a tweet in which the U.S. president said a new trade deal with Mexico and Canada would cover the cost of a wall.

The two leaders spoke by telephone on Wednesday. Lopez Obrador said they discussed the possibility of creating a joint program for development and job creation in Central America and Mexico.

One of Trump’s key campaign promises was to build the border wall and he had long pledged that Mexico — not U.S. taxpayers — would fund it.

In a Twitter post early on Thursday, Trump again insisted that Mexico will foot the bill for the border wall.

He wrote that payment will begin with savings for the United States as a result of the renegotiated trade deal between the United States, Mexico and Canada. “Just by the money we save, MEXICO IS PAYING FOR THE WALL!”

Mexico has repeatedly rejected Trump’s demand that it pay for the project, and it is unlikely the country’s new president will reverse that course.

Funding for the border wall has been a sticking point in spending bills before the U.S. Congress, and Trump clashed with leading Democrats over the issue during an Oval Office meeting on Tuesday.

One of them, Senate Democratic leader Chuck Schumer, taunted Trump over his Mexico claim later on Thursday.

“Mr. President: If you say Mexico is going to pay for the wall (which I don&rsquo;t believe), then I guess we don’t have to! Let’s fund the government,” Schumer retorted in his own Twitter post.

Lopez Obrador said he also discussed a possible meeting with Trump in Washington.

“He invited me. I’m also able to go to Washington, but I think that both for him and for us there must be a reason and I think the most important thing would be to sign this agreement or meet with that purpose,” said Lopez Obrador.

(Reporting by Anthony Esposito in Mexico City and Doina Chiacu in Washington; editing by Frank Jack Daniel and Jonathan Oatis)