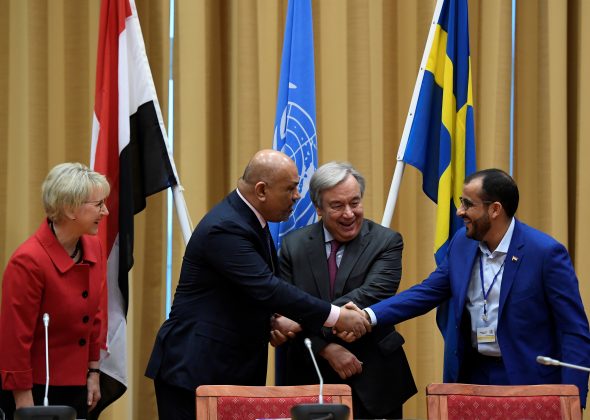 RIMBO, Sweden (Reuters) – Yemen’s warring parties agreed to a ceasefire in the Houthi-held port city of Hodeidah and placing it under local control at the close of talks on Thursday in a breakthrough for U.N.-led peace efforts to end the war.

United Nations Secretary-General Antonio Guterres said that a framework for political negotiations would be discussed at the next round of talks between the Iranian-aligned Houthis and the Saudi-backed government of Abd-Rabbu Mansour Hadi.

Western nations, some of which supply arms and intelligence to the Saudi-led coalition that intervened in Yemen in 2015, have pressed the two sides to agree confidence-building steps to pave the way for a wider truce and a political process to end the war that has killed tens of thousands of people and pushed Yemen to the verge of starvation.

The Houthis control most population centers including the capital Sanaa, from where they ousted Hadi’s government in 2014. It is now based in the southern port of Aden.

“You have reached an agreement on Hodeidah port and city, which will see a mutual re-deployment of forces from the port and the city, and the establishment of a Governorate-wide ceasefire,” Guterres said.

“The UN will play a leading role in the port,” he told a news conference in Rimbo, outside Stockholm.

U.N. envoy Martin Griffiths said armed forces of both parties would withdraw “within days” from Hodeidah port, the main entrypoint for most of Yemen’s commercial imports and vital aid supplies, and later from the city, where coalition troops have massed on the outskirts.

The withdrawal of armed forces would also include Salif port, used for grains, and that of Ras Isa, used for oil, which are both currently under Houthi control.

“This is a minor breakthrough. They have been able to achieve more than anyone expected,” said Elizabeth Dickinson, Senior Analyst, Arabian Peninsula at International Crisis Group.

“Saudi Arabia has taken a firmer hand with the Hadi government, which has in turn been more cooperative.”

Riyadh has come under increased Western scrutiny over the Yemen war and its activities in the region following the murder of Saudi journalist Jamal Khashoggi at Saudi Arabia’s Istanbul consulate in October.

The Sunni Muslim Arab coalition led by Saudi Arabia and the United Arab Emirates intervened in the war in 2015 to restore Hadi’s government but has been bogged down in a military stalemate for years and wants to exit the costly war.

“Important political progress made including the status of Hodeida,” UAE Minister of State for Foreign Affairs Anwar Gargash tweeted.

He attributed the “significant breakthrough” to pressure brought on the Houthis by the offensive on Hodeidah, the group’s main supply line.

Guterres said the parties had made “real progress” and that the United Nations would pursue pending issues “without interruption”.

His envoy had also been seeking agreement on reopening Sanaa airport and shoring up the impoverished Arab country’s central bank. Most basic commodities are out of reach for millions of Yemenis.

Griffiths said he hoped a deal would be struck on reopening the airport over the next week following discussions in Sweden on whether flights would be inspected in government-held airports before flying in and out of Sanaa.