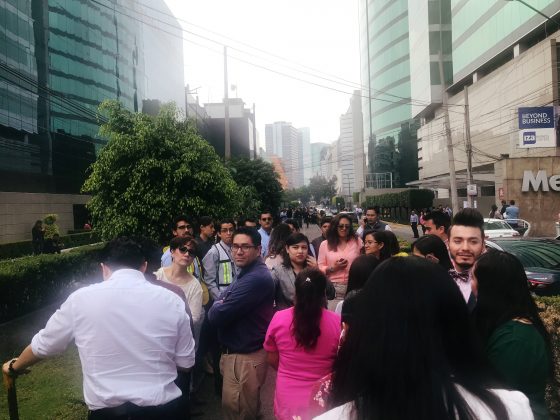 People gather outside the buildings after an earthquake was felt in Mexico City, Mexico July 18, 2019. REUTERS/Henry Romero

MEXICO CITY (Reuters) – A minor earthquake struck Mexico City on Thursday, the latest in a series of small tremors that have shaken buildings and jangled nerves across the Mexican capital over the past week.

The magnitude 2.2 quake was registered at 1:55 p.m. local time (1855 GMT) in the central neighborhood of Alvaro Obregon, the National Seismological Service (SSN) said in a statement on Twitter.

There were no immediate reports of damage or injuries, according to the city’s civil protection authority.

A report published on Wednesday by the SSN and the National Autonomous University of Mexico found that 16 small earthquakes have struck Mexico City’s central Miguel Hidalgo district between July 12-17.

Situated at the intersection of three tectonic plates, Mexico is one of the world’s most earthquake-prone countries. The capital is seen as particularly vulnerable due to its location on top of an ancient lake bed.