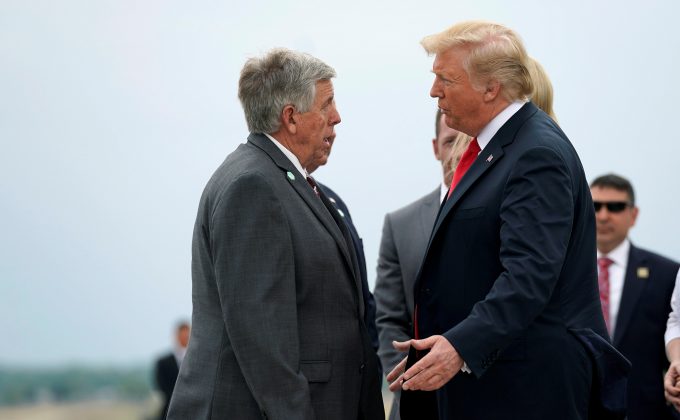 (Reuters) – Missouri’s Republican governor could sign a law as early as this week banning most abortions in the Midwestern state after the eighth week of pregnancy, part of a wave of restrictions aimed at driving a challenge of abortion to the U.S. Supreme Court.

Republican Governor Mike Parson told reporters on Friday he planned to sign the bill, which was approved by the Republican-controlled state legislature last week and would enact one of the United States’ most restrictive bans. He did not set a date for the signing but has until July 14 to do so, according to local media reports.

The state is one of eight where Republican-controlled legislatures this year have passed new restrictions on abortion. It is part of a coordinated campaign aimed at prompting the nation’s now conservative-majority top court to cut back or overturn the 1973 Roe v. Wade decision that established a woman’s right to terminate a pregnancy.

The most restrictive of those bills was signed into law in Alabama last week. It bans abortion at all times and in almost all cases, including when the pregnancy resulted from rape or incest but allows exceptions when the mother’s life is in danger. The Missouri bill also offers no exception for cases of rape or incest.

Abortion is one of the most bitterly contested social issues in the United States. Opponents often cite religious belief in saying that fetuses deserve rights similar to those of infants. Abortion rights advocates say the bans deprive women of equal rights and endanger those who end up seeking riskier, illegal methods to end a pregnancy.

Conservative lawmakers have been emboldened in their efforts to roll back Roe v. Wade by two judicial appointments by President Donald Trump that have given conservatives a 5-4 majority on the court.

The Supreme Court could act as early as Monday on appeals seeking to revive two abortion restrictions enacted in Indiana in 2016.

Abortion rights activists on Sunday marched on the Alabama state capital in Birmingham to protest that state’s new law, which would take effect in two months.