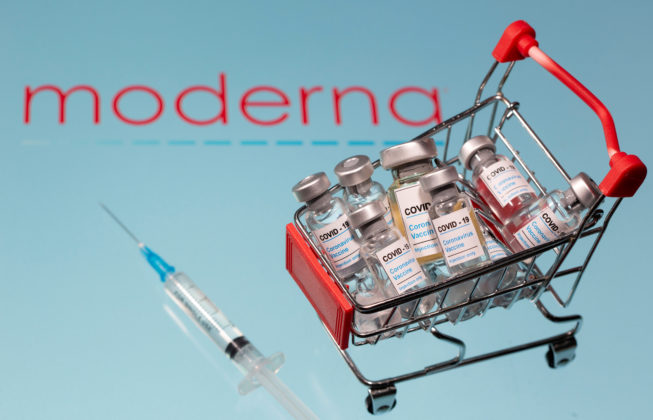 FILE PHOTO: A small shopping basket filled with vials labeled "COVID-19 - Coronavirus Vaccine" and a medical sryinge are placed on a Moderna logo in this illustration taken November 29, 2020. REUTERS/Dado Ruvic/Ilustration

(Reuters) – A panel of outside advisers to the U.S. Food and Drug Administration is expected to endorse emergency use of Moderna Inc’s coronavirus vaccine during a meeting on Thursday, as the nation prepares to roll out a second vaccine.

The panel vote on whether the vaccine’s benefits outweigh its risks is likely to come some time after 3 pm ET (2000 GMT), with an FDA authorization expected as soon as Friday.

This is the same committee of expert advisers that last week backed the COVID-19 vaccine from Pfizer Inc and German partner BioNTech SE, clearing the way for the FDA emergency use authorization (EUA) a day later.

That vaccine is being distributed throughout the country. A massive inoculation program began at U.S. hospitals on Monday.

The Moderna vaccine uses similar messenger RNA technology but with less onerous cold storage requirements than the Pfizer/BioNTech shot, making it a better option for remote and rural areas. Both vaccines were about 95% effective in preventing illness in pivotal clinical trials.

The FDA advisory committee is likely to discuss Moderna’s reports of side effects from its 30,000-person trial, which were more frequent than those reported by Pfizer. These were primarily relatively short-lived reactions to the vaccination rather than serious adverse events.

SVB Leerink analysts said the Moderna vaccine appears less tolerable than the Pfizer/BioNTech shot, but noted that is not a proper comparison across trials and unlikely to stand in the way of an EUA.

The FDA staff did not raise any serious concerns about safety in documents published on Tuesday in preparation for the meeting. It said a link between Bell’s palsy, which causes temporary paralysis of facial muscles, and the vaccine could not be ruled out after some cases were reported in trials of both vaccines.

Pfizer and BioNTech said those cases occurred at the same rate as in the general population.

Moderna is seeking authorization for people aged 18 and older. That could sidestep the lively discussion last week among panel members about whether there was enough data to authorize use of the Pfizer/BioNTech vaccine in adolescents aged 16 and 17. They ultimately voted to back that vaccine for those 16 and older.

Initial Moderna vaccine supply would likely go to the United States, which has signed deals to secure as many as 200 million doses and is expecting the first 20 million this month. The vaccine is administered in two doses about four weeks apart.

The company has also signed supply deals with Canada, the European Union and the UK. The vaccine is undergoing a “rolling review” by regulators for all three.

(Reporting by Manas Mishra in Bengaluru; Editing by Caroline Humer and Bill Berkrot)