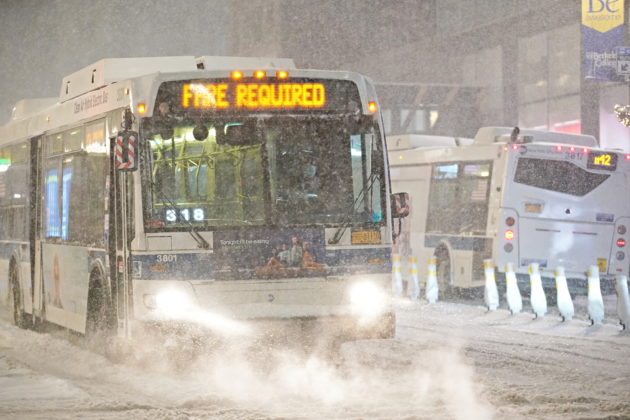 NEW YORK (Reuters) – A winter storm that has blasted the U.S. Northeast with snow, rain and gusty winds was likely to dump a foot or more of snow on parts of New England before heading out to sea on Thursday.

The first major snowstorm of the season forced much of the population to obey stay-at-home coronavirus orders, but also disrupted travel, possibly including distribution of the new COVID-19 vaccine.

It also brought its wintry mix to Washington, parts of Maryland, Virginia, West Virginia and Pennsylvania on Wednesday, affecting an area home to more than 50 million people.

Forecasts showed it would pummel Boston and parts of the New England region before heading out to sea around nightfall.

Before then, many areas could expect 12 to 18 inches of snow.

Wind gusts of up to 50 miles per hour were likely to knock down trees and power lines, the National Weather Service said.

Roads were treacherous. A pileup of 30 to 60 cars on Interstate-80 in Pennsylvania on Wednesday killed two people and injured more, state police said.

At the same time, trucks were delivering the first batches of the COVID-19 vaccine. Healthcare workers around the country started receiving the first inoculations this week.

“We are also watching very carefully the delivery of the vaccine,” New Jersey Governor Phil Murphy told a news conference on Wednesday, noting that some 35 hospitals in his state were expecting deliveries between Wednesday and Friday. “If we didn’t have enough already on our hands, that’s another dimension.”

New Jersey Transit on Thursday extended its suspension of all rail service, in addition to halting several bus lines including those destined for New York City.