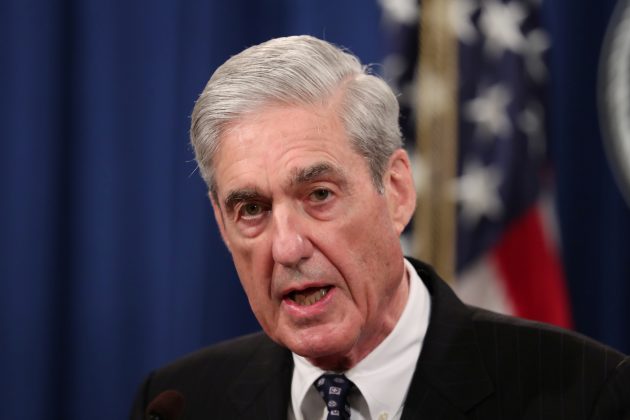 U.S. Special Counsel Robert Mueller makes a statement on his investigation into Russian interference in the 2016 U.S. presidential election at the Justice Department in Washington, U.S., May 29, 2019. REUTERS/Jim Bourg

WASHINGTON (Reuters) – U.S. Special Counsel Robert Mueller said on Wednesday his investigation into Russia’s interference in the 2016 election was never going to end with criminal charges against President Donald Trump and indicated it was up to Congress to decide if impeachment proceedings are justified.

In his first public comments since starting the investigation in May 2017, Mueller said Justice Department policy prevented him from bringing charges against a sitting president, telling reporters it was “not an option we would consider.”

But he also said his two-year investigation did not clear Trump of improper behavior and pointed out there were other ways to hold presidents accountable.

“The Constitution requires a process other than the criminal justice system to formally accuse a sitting President of wrongdoing,” Mueller said as he announced his resignation from the Justice Department.

Democrats in Congress are debating whether to try to move ahead with impeachment, an effort that is almost certain to fall short in the Republican-controlled Senate.

The White House and several top Republicans said it was time to move on to other matters, while several Democratic presidential candidates called for impeachment.

“What Robert Mueller basically did was return an impeachment referral,” Senator Kamala Harris said on Twitter.

“Given that Special Counsel Mueller was unable to pursue criminal charges against the President, it falls to Congress to respond to the crimes, lies and other wrongdoing of President Trump &ndash; and we will do so,” said Jerrold Nadler, the Democratic chairman of the House of Representatives Judiciary Committee.

A redacted version of Mueller’s report was published in April, concluding that Russia repeatedly interfered in the 2016 election and that Trump’s election campaign had multiple contacts with Russian officials, but did not establish a criminal conspiracy with Moscow to win the White House.

Mueller’s report also declined to make a judgment on whether Trump obstructed justice, although the report outlined 10 instances in which Trump tried to impede the investigation, including seeking to have Mueller fired.

Trump, who has repeatedly denounced Mueller’s investigation as a “witch hunt” and “hoax” meant to hobble his presidency, said the matter was settled.

“Nothing changes from the Mueller Report,” he said on Twitter. “There was insufficient evidence and therefore, in our Country, a person is innocent. The case is closed! Thank you.”

Mueller, who headed the FBI from 2001 to 2013, said he would not elaborate beyond what was contained in his 448-page report, signaling to Democrats that he was unlikely to provide them more ammunition for impeachment if he were to testify on Capitol Hill.

“Beyond what I’ve said here today and what is contained in our written work, I do not believe it is appropriate for me to speak further,” he said.

He did not take questions after making his statement.

The House Judiciary Committee’s top Republican, Representative Doug Collins, said relitigating Mueller’s findings would only divide the country. “It is time to move on from the investigation and start focusing on real solutions for the American people,” he said.

Only one Republican so far, Representative Justin Amash, has said Trump has committed impeachable offenses. “The ball is in our court, Congress,” he said on Twitter.

Mueller’s investigation ensnared dozens of people, including several top Trump advisers and a series of Russian nationals and companies.

Among them are his former campaign chairman, Paul Manafort, who is serving 7 1/2 years in prison for financial crimes and lobbying violations, and his former personal lawyer, Michael Cohen, who recently began a three-year sentence for campaign-finance violations and lying to Congress.

Since the report’s release, Democratic lawmakers have tried without success to get the unredacted report and underlying evidence.

Barr now is leading a review of the origins of the Russia investigation in what is the third known inquiry into the FBI’s handling of the matter. Trump harbors suspicions that the Democratic administration of President Barack Obama started the investigation in 2016 to undermine his presidency.