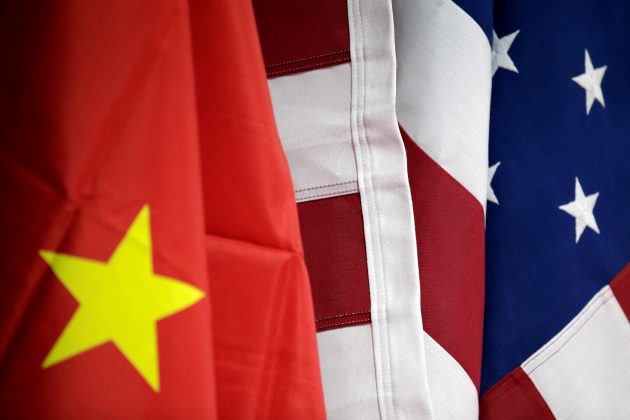 Flags of U.S. and China are displayed at American International Chamber of Commerce (AICC)'s booth during China International Fair for Trade in Services in Beijing, China, May 28, 2019. REUTERS/Jason Lee

GENEVA (Reuters) – The United States, embroiled in a trade war with China, should also impose sanctions on China for detaining an estimated one million Uighurs in its Xinjiang region, where repression has not abated, Human Rights Watch said on Wednesday.

The Trump administration has been weighing sanctions against Chinese officials, including Xinjiang Communist Party chief Chen Quanguo, since late last year, and though it has ramped up criticism it has held back from imposing the measures.

China has faced growing global condemnation for setting up complexes in the remote western region that U.N. experts describe as mass detention centers holding more than one million ethnic Uighurs and other Muslims.

In March, China’s vice foreign minister defended what Beijing calls its vocational training centers for Muslims and said its “campuses” would be closed down gradually as extremist ideology is vanquished in the region.

“Here we have got a U.S. administration that is clearly fine with the idea of imposing serious economic sanctions, but then seems to be lagging behind on imposing them for serious human rights violations,” Sophie Richardson, China director of Human Rights Watch, told a briefing in Geneva.

A bipartisan group of U.S. lawmakers last month faulted the Trump administration for failing so far to impose sanctions over China&rsquo;s alleged rights abuses against its Muslim minority and called for punitive measures against a senior Communist Party official and Chinese companies.

The lawmakers called on the administration to apply sanctions under the Global Magnitsky Act. This federal law allows the U.S. government to target human rights violators around the world with freezes on any U.S. assets, U.S. travel bans and prohibitions on Americans doing business with them.

“We believe that senior Xinjiang officials and national officials who are implicated in the crisis in Xinjiang should be subject to global Magnitsky sanctions,” Richardson said.

“The situation in Xinjiang is far from improving. If anything, (there is) the failure to release large numbers of people, and the desire to spin this as some sort of essential national security strategy that really is about vocational training rather than arbitrary detention,” she said.

The U.S. Senate and House are considering draft bills, variations of the Uighur Human Rights Policy Act, both of which enjoy “very broad bipartisan support”, she added.

Human Rights Watch published a report this month entitled “China’s Algorithms of Repression”, on a mass surveillance app used by Xinjiang police to track citizens that has led to arrests.

“One of our concerns coming out of this project really is about these oceanic data sets that the Chinese government has now gathered and how exactly they are being used,” Richardson said.

The U.S.-based activist group is lobbying the 47 member states of the U.N. Human Rights Council to hold China to account for abuses at the three-week session opening on June 24.