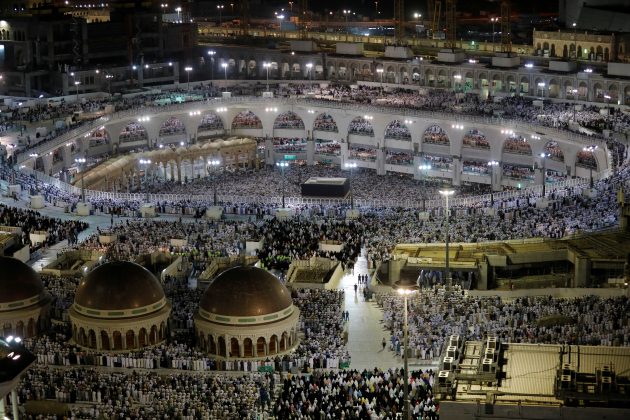 Muslims pray at the Grand Mosque during the annual Haj pilgrimage in the holy city of Mecca, Saudi Arabia August 6, 2019. REUTERS/Umit Bektas

MECCA, Saudi Arabia (Reuters) – Hundreds of thousands of white-clad pilgrims, many gripping umbrellas to ward off Saudi Arabia’s blistering summer sun, descended on Mecca this week ahead of the annual haj.

Saudi officials asked Muslims to focus on rituals of worship, warning against politicizing the rite as wars rage on in the region and at a time of heightened tensions between Sunni Muslim Saudi Arabia and Shi’ite Muslim adversary Iran.

“Haj…is not a place for political conflicts or to raise sectarian slogans that divide Muslims,” Abdulrahman al-Sudais, imam of the Grand Mosque of Mecca, told reporters.

Mecca Governor Prince Khalid al-Faisal asked worshippers earlier this week to “leave all other matters in your countries to discuss when you are back”.

Saudi Arabia stakes its reputation on its guardianship of Islam’s holiest sites and organizing a peaceful haj, which has been marred in the past by deadly stampedes, fires and riots.

Authorities said more than 1.8 million pilgrims had so far arrived in the kingdom for the world’s largest annual Muslim gathering, which retraces the route the Prophet Mohammad took 14 centuries ago.

“All of this is for the sake of the haj,” 43-year-old Fatima Sayed from Giza, Egypt, said of the searing heat. “We applied twice before but God didn’t permit it, and, thank God, it was a very big surprise that He ordained it for me this year.”

Every able-bodied Muslim who has the means should perform the haj at least once in their lifetime under a quota system.

Saudi Arabia has made use of technology to manage the flow of millions at the same place at the same time. This includes electronic identification bracelets, connected to GPS, that were introduced after a 2015 crush killed hundreds of people.

A new highspeed railway linking Mecca and Medina, Islam’s second most sacred site, is being used during the haj season for the first time after its inauguration last September.

The pilgrimage is the backbone of a plan to expand tourism under a drive to diversify the Saudi economy away from oil. The haj and the umrah, the year-round lesser pilgrimage, generate billions of dollars in revenues from worshippers’ lodging, transport, fees and gifts.

Amjad Khan, a pharmacist from Manchester in Britain, said the new measures made the pilgrimage a smoother experience.

“Here in the company of our brothers from all over the world, it’s a very good feeling,” Khan, 36, said.