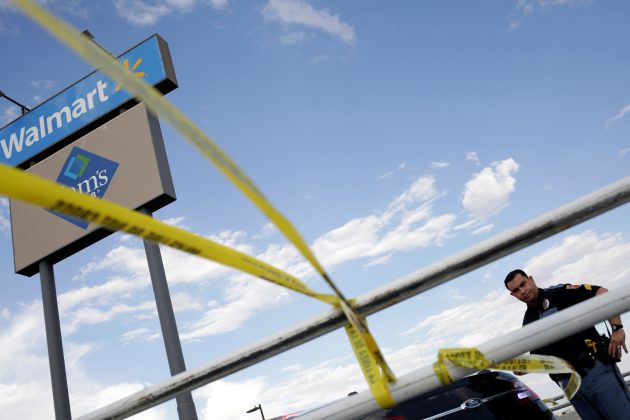 A police officer stands next to a police cordon after a mass shooting at a Walmart in El Paso,Texas, U.S. August 3, 2019. REUTERS/Jose Luis Gonzalez

WASHINGTON (Reuters) – A petition started by a junior Walmart Inc <WMT.N> worker in California to protest the retailer’s sale of firearms, following two mass shootings over the weekend left 31 people dead in Texas and Ohio, has gathered more than 45,000 signatures.

Thomas Marshall, a 23-year-old category manager in San Bruno began his protest by emailing fellow employees and asking them to call in sick on Tuesday, leave work early on Wednesday, and to sign a Change.org petition.

The petition https://www.change.org/p/doug-mcmillon-stop-the-sale-of-guns-at-walmart-stores?utm_content=bandit-starter_cl_share_content_en-us%3Av4&recruited_by_id=fc7b5740-b810-11e9-be8a-6fbcafd3c27d&recruiter=989859201&utm_source=share_petition&utm_medium=copylink&utm_campaign=share_petition, which is open to the public, is steadily approaching its goal of 50,000 signatures.

“In light of these recent tragedies — a mere snapshot of the gun violence epidemic plaguing the United States — and in response to Corporate’s inaction, we as employees are organizing several days of action, to protest Walmart’s profit from the sale of firearms and ammunition,” the petition says.

Marshall told Reuters he and other organizers would send the petition to the company’s Chief Executive Doug McMillon after it reaches its target.

Marshall said he was shut out of the company’s email and messaging networks temporarily earlier this week after he started the protest, but that he has since been granted access.

Employees in San Bruno and in Portland, Oregon had walked out on Wednesday in protest of the company’s policy of selling firearms, Marshall said, adding that some Walmart employees in New York also held a minute of silence that day.

Walmart said 40 employees in San Bruno protested by walking out but did not confirm the other details.

“A lot more employees have been reaching out to me to express their support but a majority of those employees are very afraid of retaliation from the company,” he said.

Earlier this week, Walmart told Reuters there had been no change in its policy on gun sales after the recent mass shootings, one of which took place in a Walmart store.

Years of public pressure led Walmart, the largest U.S arms retailer, to end assault-rifle sales in 2015 and to raise the minimum age for gun purchases to 21 in 2018.

Some gun control activists and Walmart customers now want the retailer to drop sales of guns and ammunition altogether.

Walmart spokesman Randy Hargrove said on Thursday the company continued to feel there were more appropriate ways for employees to engage with the retailer, including through discussions with top leadership.

He said the company’s policy on selling firearms had not changed.

“We have worked very hard to be a responsible firearms retailer…Walmart does more in the area of background checks than what the federal law requires,” Hargrove added.

The retailer’s Chief Executive Doug McMillon sent a message to employees on social media late on Tuesday, assuring them the company was listening to their concerns.

“We will be thoughtful and deliberate in our responses, and we will act in a way that reflects the best values and ideals of our company,” McMillon said.

(Reporting by Nandita Bose in Washington; Editing by Bernadette Baum)

One thought on “Petition by Walmart employee to protest gun sales gathers over 45,000 signatures”